The World Health Organization said Tuesday the current outbreak of Ebola, which has to date killed an estimated 1,200 people in West Africa, is confirmed only in Guinea, Liberia, Nigeria, and Sierra Leone, and “at present, no cases have been confirmed anywhere else in the world.” On August 8, the organization had declared an extremely rare Public Health Emergency of International Concern over the outbreak, and the world’s news media (NY Times; CBC; BBC; Al Jazeera) is carrying stories about it hour by hour. 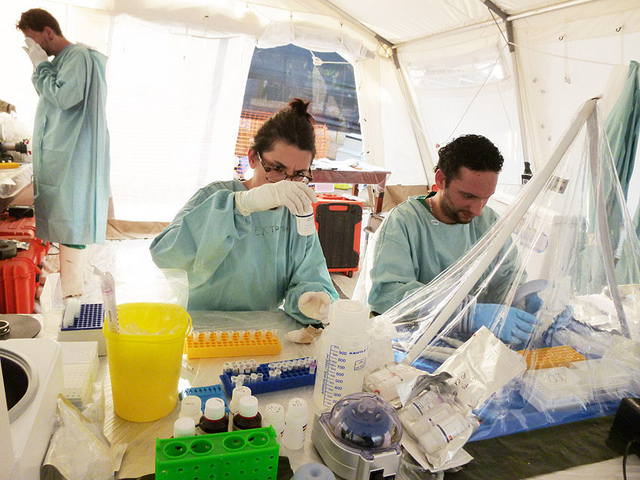 Why is Ebola getting so much attention — and relative funding? For pennies per year per person, say experts, neglected tropical diseases that blight the lives of some billion of the world’s poorest people could be eliminated. But while money is scarce for such diseases, expensive drugs like ZMapp, for relatively obscure diseases like Ebola, are richly funded.

The interest in Ebola can be summed up by biodefence capacity in Western countries, notably America, writes Christopher Degeling, a veterinarian and Research Fellow at the Centre for Values, Ethics and the Law at the University of Sydney. This, justifiably, raises eyebrows — but Degeling argues while U.S. national interest is driving the drug development, “in the next few months they might prove to be in everyone’s interest.”  An excerpt of his piece in Dispatches/Publica:

Ebola virus disease typically only occurs in rural and remote areas among resource-poor populations. Until the large, recent outbreak in West Africa, cases of the illness were a rarity.

So the fact that we even have experimental drugs for the disease tells a story about how responses to global health crises are shaped by the social and political interests of the developed world.

Major pharmaceutical companies have shown little interest in developing effective treatments for diseases such as this. There’s no incentive for the commercial risks of research and companies naturally prefer to focus on diseases that can sustain large markets of wealthy regular users …  read Biodefence Drives Ebola Drug Development. (Free story)