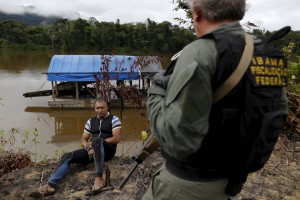 An agent of Brazil’s environmental agency detains a gold prospector who works as a diver in the illegal gold dredge on the shores of Uraricoera River, during an operation against illegal gold mining on indigenous land, in the heart of the Amazon rainforest, in Roraima state, Brazil April 15, 2016. At over 9.5 million hectares, the Yanomami territory is twice the size of Switzerland and home to around 27,000 indians. The land has legally belonged to the Yanomami since 1992, but illegal miners continue to plague the area, sawing down trees and poisoning rivers with mercury in their lust for gold. REUTERS/Bruno Kelly