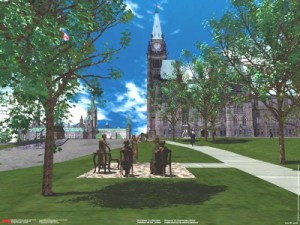 Today is Persons Day in Canada. I was reminded of this, not by a story in the Canadian media – which by now has become blasé about this annual commemoration of women’s rights – but by an opinion column in Wednesday’s New York Times, which headlined it “A Tree Grows in Canada.”

The tree metaphor referred to a comment made by a British judge on 18 October 1929 when he ruled that, for the purpose of Canadian Senate appointments, women counted as “qualified persons” in Canada’s made-in-Britain constitution. The British North America Act, declared Lord John Sankey, had “planted in Canada a living tree capable of growth and expansion within its natural limits.” In modern America’s most conservative judicial and political circles, the Times writer noted by way of contrast, the same constitutional tree would be “part of a petrified forest.”

It had taken more than eight years for Canadian women to achieve Senate eligibility. By 1921, they could vote provincially or federally, or run for election provincially or federally, but the Senate remained beyond their grasp. It took the determination of an Edmonton magistrate named Emily Murphy to change this inequitable state of affairs. When she discovered that five individuals could petition the Canadian government for clarification of any part of the British North America Act, she invited four friends – Louise McKinney, Nellie McClung, Henrietta Muir Edwards and Irene Parlby – to add their signatures to her letter.

The “famous five,” as they came to be called, hit a stumbling block when their petition went to the Supreme Court of Canada. The court declared on 24 April 1928 that women were not persons because the authors of the 1867 British North America Act had intended that only men should hold public office. Undaunted, the five women appealed to the judicial committee of the Privy Council in London, then the court of last resort for Canadians. The committee ruled in their favour in 1929, and women became eligible to sit in the Senate of Canada. Their exclusion from public office, wrote the British judges, had been “a relic of days more barbarous than ours.”

It was widely believed at the time that Murphy, or at the very least one of her four co-petitioners, would be appointed to the Senate when the next vacancy occurred. But, for reasons that have never been been made public, this never happened. It wasn’t until 18 October 2009, 80 years after the fact, that the “famous five” received their long overdue recognition by being named honourary senators. It was the first time in Canadian history that anyone – female or male – was appointed posthumously to the Senate. The living tree is still growing.