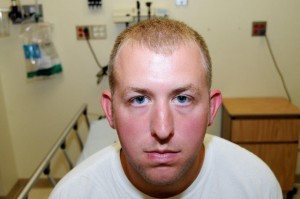 St. Louis County Prosecutor’s Office photo shows Ferguson, Missouri police officer Darren Wilson photo taken shortly after August 9, 2014 shooting of Michael Brown, presented to the grand jury and made available on November 24, 2014. A Missouri grand jury voted not to charge Wilson for the fatal August shooting of an unarmed black teenager, an incident that set off weeks of sometimes violent protests around the St. Louis area, a county prosecutor said on Monday. REUTERS/St. Louis County Prosecutor’s Office/Handout (UNITED STATES – Tags: CRIME LAW HEADSHOT) FOR EDITORIAL USE ONLY. NOT FOR SALE FOR MARKETING OR ADVERTISING CAMPAIGNS. THIS IMAGE HAS BEEN SUPPLIED BY A THIRD PARTY. IT IS DISTRIBUTED, EXACTLY AS RECEIVED BY REUTERS, AS A SERVICE TO CLIENTS – RTR4FFQU