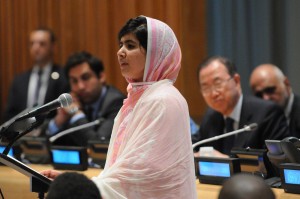 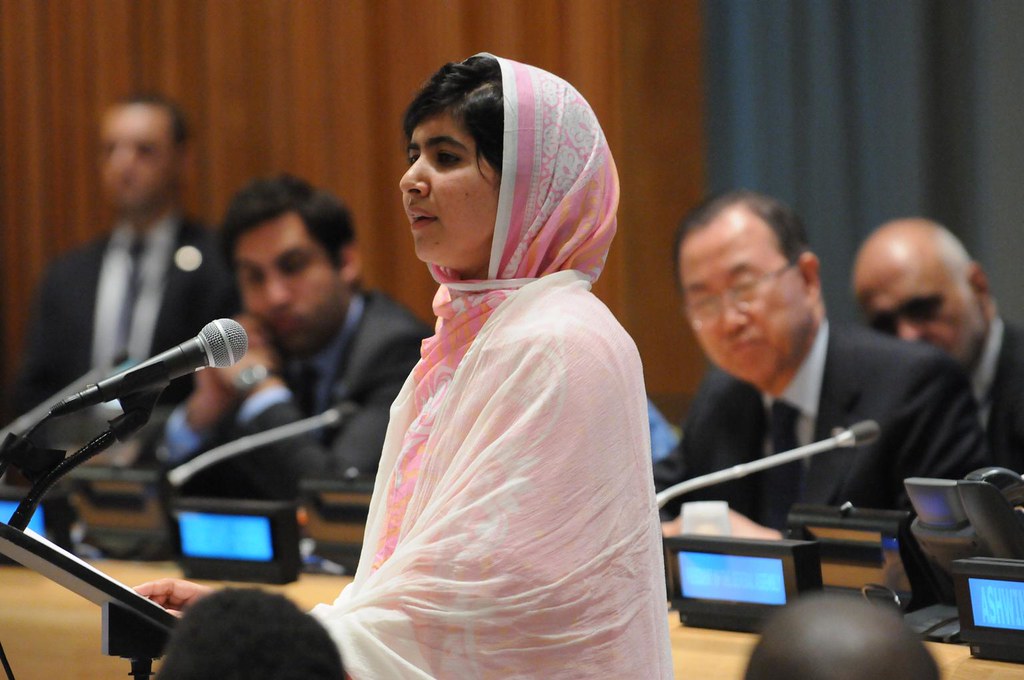 Malala Yousafzai’s speech
(Centre, at podium) education activist Malala Yousafzai of Pakistan addresses youth delegates at the Malala Day celebration and UN Youth Assembly at UNHQ. UN Secretary-General Ban Ki-moon is behind her, at right..
.
On 12 July 2013, her 16th birthday, Malala Yousafzai of Pakistan addressed young leaders on the importance of education, particularly for girls around the world, at a special Youth Assembly at United Nations Headquarters (UNHQ). Malala is the courageous education activist who, along with friends, was shot by the Taliban last October for advocating for girls’ education in her country. Recovered and now back in school, she continues to fight for every child’s right to education. This is her first high-level appearance and statement since the shooting. Education is a fundamental human right, yet 57 million children across the globe are still out of school; many of them live in countries affected by conflict. Additionally, more than 120 million young people between the ages of 15 and 24 – most of whom are young women – lack basic reading and writing skills. More than 500 youth leaders from around the world joined Malala to celebrate her birthday – declared ‘Malala Day’ – and to issue a global call to action for universal education. Malala and youth delegates presented a global petition from young people and a set of education demands written by youth, for youth, to UN Secretary-General Ban Ki-moon at the youth assembly. National ‘Malala Day’ events were also held in more than 50 countries around the world. The Youth Assembly was organized by the President of the UN General Assembly Vuk Jeremic and UN Special Envoy for Global Education Gordon Brown, with the support of the A World at School initiative, in support of the Secretary-General’s Global Education First Initiative (GEFI) to put every child in school, improve the quality of learning, and foster global citizenship by the end of 2015.