Iraq on our mind 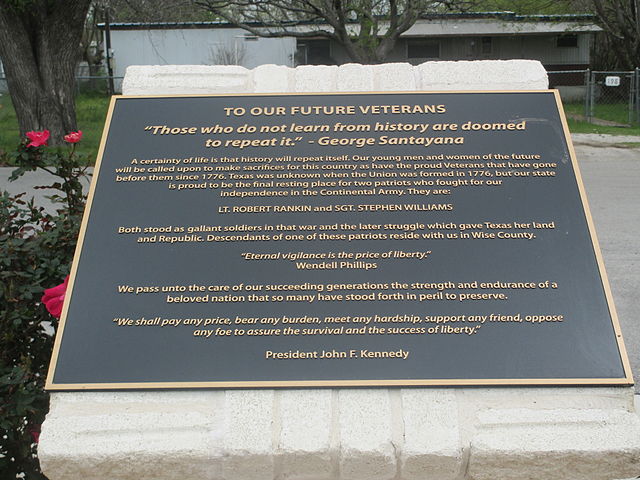 “Those who do not learn from history are doomed to repeat it” — American/Spanish philosopher George Santayana. Photo: a military plaque at Veterans Memorial Park in Rhome,Texas. (Creative Commons)

Events in Iraq have dominated world affairs this week. Reports and analysis in Facts and Opinions provide context:

For 40 years, one big contest played out in the world. It was a kind of arm-wrestling match between the Soviets and the Americans. I use the word ‘Soviets’ to distinguish one contestant from its successor of sorts: today’s Russians. Eventually, the Soviets could not keep their end of the game going and walked away from the table, into history. The last decade of the century was one where there was but one superpower — and it wanted to party. The attacks on America on September 11, 2001, brought that party to a halt. It signified a new game was beginning; not one of two superpowers engaged while the rest of the world largely stayed out of the way, but one where arm-wrestling was replaced by a kind of hide-and-seek.

Having co-authored a 2007 biography of Hillary Clinton, I know that Iraq is not one of her favorite subjects. But with the bloodshed and sectarian division now crippling Iraq, I wondered what her new memoir, Hard Choices, had to say about a country that’s long been a political minefield for her. The answer is not a lot. There is no chapter on its own for Iraq, like there is for Gaza, or Burma or Haiti.

Millennia of not-always-wise irrigation, a century of water seizures for national ends, and decades of conflict including that now in Iraq, have not been kind to the once-lush basin of the Tigris and Euphrates Rivers. “Recovery” might yet be possible, in the unlikely event that environmentalists, who are without a name let alone an army, unify the Levant under a Green banner. But the point we all need to grasp is that the former Mesopotamia is merely a little ahead of the rest of us, on the road to bankrupting our natural security.

International Affairs columnist Jonathan Manthorpe looks at the long-term repercussions of America’s invasion of Iraq, and how it “fouled the west’s moral authority in a world where new centres of cultural, political and military power are rapidly emerging. In Bin Laden’s disciples move to realize his dream he writes: (subscription required)

There has never been a satisfactory explanation why George W. Bush and his Praetorian Guard nursed such a visceral hatred of Saddam Hussein. But they came to power in 2000 intent on vendetta, and within hours of the September 2001 al-Qaida attacks on New York and Washington the closest officials and advisers around Bush were looking for a Saddam connection. Within days, senior officers in the Pentagon realized with alarm the administration had already loosed the unstoppable juggernaut that would lead to the invasion of Iraq and removal of Saddam in 2003.

WHAT WE ARE READING ELSEWHERE:
Of Iraq’s “house of horrors CBC journalist Brian Stewart asks, “How can one even begin to explain such a fiasco?”  One word comes to mind: Hubris.  It’s been in flagrant display this week. Remarkably, given their record and the various demands they be charged with war crimes, former American president George W. Bush, Dick Cheney and Donald Rumsfeld and crew — who  can make Saddam Hussein seem wise and statesmanlike — still walk and talk amongst us (and, word, do they talk) long after Hussein was sent to the gallows.

What next? The New York Times‘ David Brooks argues that some answers for Iraq can be found in — of all the world’s bizarre benighted places — Rwanda. Post-genocide Rwanda shows “if you get the political elites behaving decently, you can avoid the worst. Grimly, there’s cause for hope.”  Meanwhile, an American Public Policy Polling poll on June 17 suggests that 74 per cent of Americans oppose sending combat troops to Iraq.

This entry was posted in Current Affairs, Gyroscope and tagged Deborah Jones, Iraq.