Why the NRA makes America so very dangerous

“Lock and load. Defend liberty” is what the sign outside the gun shop in my sleepy little Virginia town says. Last week it was something like “Arm yourself so you can shoot back.”

In the rural Virginia area where I live, there are at least five gun shops in a 15-mile radius.  The population of my town, Lovettsville, is 1,800 hearty – and apparently well-armed – souls. And if they are not well-armed, well then the National Rifle Association is going do its best to make sure they are. 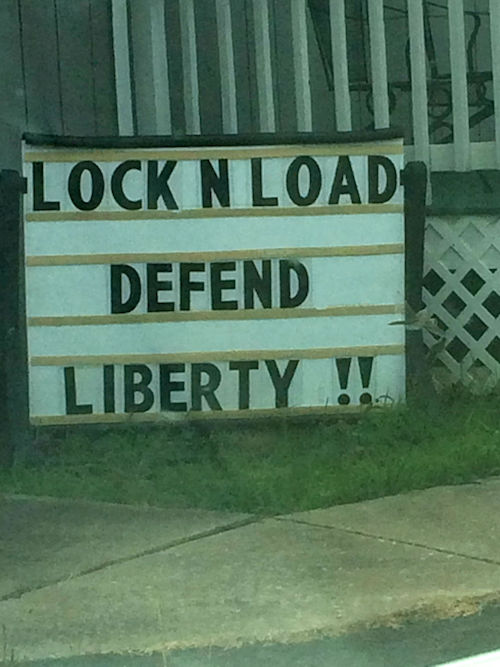 Recent events – the shootings of black men in Louisiana and Minnesota, and the subsequent shootings of five police officers in Dallas – were not only tragic proof of the abysmal state of race relations in America, but also of the overwhelming presence of guns and how they affect everyday interactions between family members, citizens and the police, and, most glaringly, black citizens and the police.

The purpose of this column is not to deal with race relations in the US. I have written about that before and most likely will again.

No, the purpose is to look at how the NRA’s toxic message of guns, guns, guns, and fear, fear, fear, affects the way people deal with daily problems, and the way police respond to all kinds of situations.

The NRA, while not a terrorist organization by nature of the way we define terror, is still about as close as you can get to being one without being one. Instead of “defending liberty,” like the sign proclaims, the NRA probably does more to deprive people of their liberty (and lives), while making America one of the deadliest places on the planet, a place so dangerous that other nations have started to issue travel warnings to their citizens because of the danger of the abundance of guns in America.

There are more than enough statistics and examples that show intelligent gun regulations work, whether in Canada, the United Kingdom or Australia. The NRA leadership, however, foams at the mouth whenever these examples are produced, and inevitably falls back on a number of tired tropes that have repeatedly been shown to be false: “If you take guns away from the good guys, only the bad guys will have guns.” And, “It only takes one good guy with a gun to stop a bad guy with a gun,” etc. etc.

By intimidation, backing far-right conservative candidates, and rampant, never-ending fear-mongering, the NRA has managed to get laws passed that support its dark agenda. Open-carry laws, concealed carry laws (which apparently don’t seem to help much if you’re a black man in Minnesota), and Stand Your Ground laws contribute to making this country one of the most dangerous places on the planet.

So to return to the police question again: You’re a police officer about to question someone, or go to a domestic dispute, or give a speeding ticket. Thanks to the NRA (which has undermined almost every effort by police to make the country less well-armed), you would be an idiot not to assume the person you are dealing with is armed. Recent data shows that police are more likely to be shot in states with a high percentage of gun ownership; the more guns in the state, the more likely a cop will be shot.

Now, overlay that fear among police with the institutionalized racism so prevalent in many police departments, and you get the seemingly never-ending incidents of black men being shot down by police, even when unarmed, or when legally carrying a firearm.

It’s not that police in other countries aren’t racist. There was a recent story of a black man in the Canadian province of New Brunswick being questioned by police because someone thought it was “suspicious” to see him sitting on a park bench, reading a book. But police in other countries do not have to worry as much, in most cases, that their interactions with the public will result in their being shot. That changes the nature of the interaction, and while it may still result in harm to individuals through brutal police tactics, there is not a lot of shooting involved.

Meanwhile, thanks to the NRA, guns are one of the most popular ways for people to express frustration or anger. The recent story of a hard-core NRA supporter who shot and killed her two daughters after an argument is a great example of this, and far from an isolated case. Take, for instance, the two supporters of a militia who got into an argument; one shot the other in the head.

It would take volumes to go over all the shootings that result from America’s largely unfettered access to these weapons of death, not even including considering guns used to commit suicide.

There have been some recent victories against the NRA. Some, including Connecticut and California, introduced legislation that reduces the size of ammunition clips and how many guns a person can buy over a period of time. Once again, however, the Republican party (a wholly-owned subsidiary of the NRA) defeated legislation that would have resulted in more stringent background checks.

Guns will always be a part of America. It’s just the way it is, and nothing is going to change that. But something can be done to reduce the unfettered access to guns, ammunition and over-sized clips. The NRA is opposed to any kind of law that will make Americans safer, and will fight any intelligent regulation tooth and nail.

But if individuals and smart politicians can build on the successes of Connecticut and California, and the growing sense of horror among Americans at what guns are doing to this country, maybe we can at least reduce the effects of the NRA’s terror-like impulses.