Canada and the US: a foot in both worlds 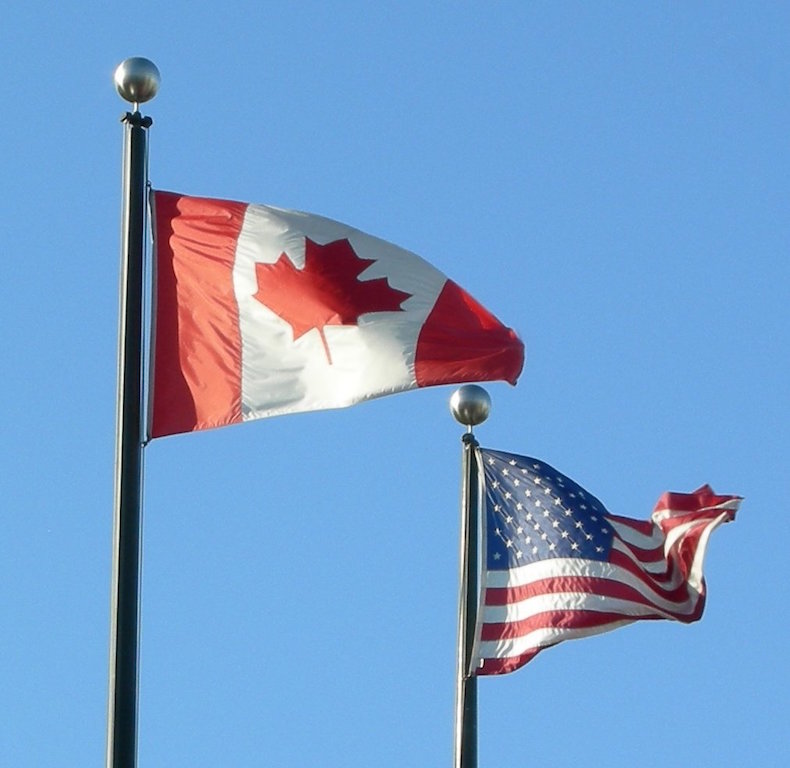 Many years ago, standing outside the main entrance to Topkapi Palace in Istanbul, a street vendor was trying to sell me and my then-girlfriend (now wife) a rug. He made a remark praising Americans, trying to soften us up. I scrunched my eyebrows and said, “I’m not an American, I’m a Canadian.”

He then made the mistake of saying, “It’s the same thing,” to which I replied, “Just like there’s no difference between you and the Greeks.” Things went downhill quickly after that. No rug was sold.

I was ferociously Canadian in those days, as are almost all Canadians once they are outside Canada, particularly when compared to Americans. But times change, and I ended up married to an American and living in the US. I eventually decided to get American citizenship in order to vote, because I can’t live somewhere and not vote. I have dual citizenship now; I understand that, due to recent changes by the current Conservative government, makes me a “second-class Canadian.”

After 35 years in Canada and 24 in the US, I have a much more nuanced understanding about the difference between the two countries that, once upon a time, had the world’s longest undefended border. And since Wednesday of this week was Canada Day and Saturday is America’s 4th of July, I thought I would ruminate on the differences between the two for a few moments.

The late, great Canadian writer Robertson Davies, a devoted believer in Jungian psychology, once wrote an article on this issue for the 100th anniversary of the now-defunct Canadian magazine Saturday Night. He said Canadians were by and large introverts, while Americans were extroverts. Canadians he wrote, tend to think first and act later, while Americans tend to act first and think later. Canadians often overthink and paralyze themselves in inaction (think, trying to solve the Quebec constitutional issue), and Americans act too quickly, and then have to deal with the consequences (think the second Gulf War).

For many, many years Canadians have defined themselves by saying they’re not Americans (part of that comes from the founding of the country, which basically happened in order not to become part of the US). I think that’s changing, as Canada matures as a nation. But there is still a tendency for Canadians to feel both superior AND inferior to Americans at the exact same moment. It is an extremely annoying trait, and one I personally hope Canadians get over sooner, rather than later.

There are some obvious differences on which I give Canada the upper hand: universal health care, no abortion law, gay marriage for over a decade, far more effective gun regulations, multiculturalism as a matter of public policy, a much-less politicized Supreme Court (despite the recent efforts of current PM Stephen Harper to change that). But I want to look beyond these obvious factors.

The first and most important difference, that became very apparent to me almost from the beginning, was the role that religion plays in public and political life. In the US, religion often dominates and dictates the direction of public debate. Anyone who publicly declared themselves an atheist (like me for instance) has no possibility of any kind to play a public role in the political life of the country. This may change in the next decade, as recent polls show the numbers of non-religiously affiliated and atheists growing in America, but for the moment such a declaration is political suicide.

The situation in Canada, however, was once described to me by a well-known Canadian politician like this: “If you stood up at a political meeting and told people you’re an atheist, the next question would be ‘Yea, that’s fine, but what are you going to do about the roads?’”

I have no idea what the religious beliefs of most Canadian leaders are, while the situation is the opposite in the US. Religious belief is a much more private matter in Canada, unlike America were it is very much a matter of public record. Canada gets the upper hand on this issue. You particularly see this on issues like gay rights and abortion.

Allow me one more story to highlight another key difference. In the late 90s I was visiting a friend in downtown Halifax. As I later waited for a taxi outside the building where his office was located, I overheard two young men discussing a business they had just started. “Yea, but if it doesn’t work, the government will bail us out,” one said to the other.

My final thought is this: Americans need to realize that Canadians are not Americans. There are fundamental cultural differences between Americans and Canadians, and culture is what makes us who we are. Now and then I see a columnist pen some ridiculous idea about Canada joining the US, and to me this betrays a fundamental misunderstanding of the two nations. I can tell you from personal experience it would never work.

Canadians on the other hand, need to realize that Americans are not the stereotypical buffoons often portrayed in Canadian media. I know many, many Americans who are deeply and passionately concerned about important issues with which many Canadians could identify. Things may take longer to happen in the US but when they do happen, they reverberate around the world.

In the end, I’m happy to have a foot in both worlds. I still love hockey, but I prefer baseball. There are some nice microbrews in the US, but Canadian beer is still far away the best. Now I just have to wait for Tim Horton’s (now owned by Americans) to come to Virginia, and all will be right in the world.