Rage over Racism: America Asked For It 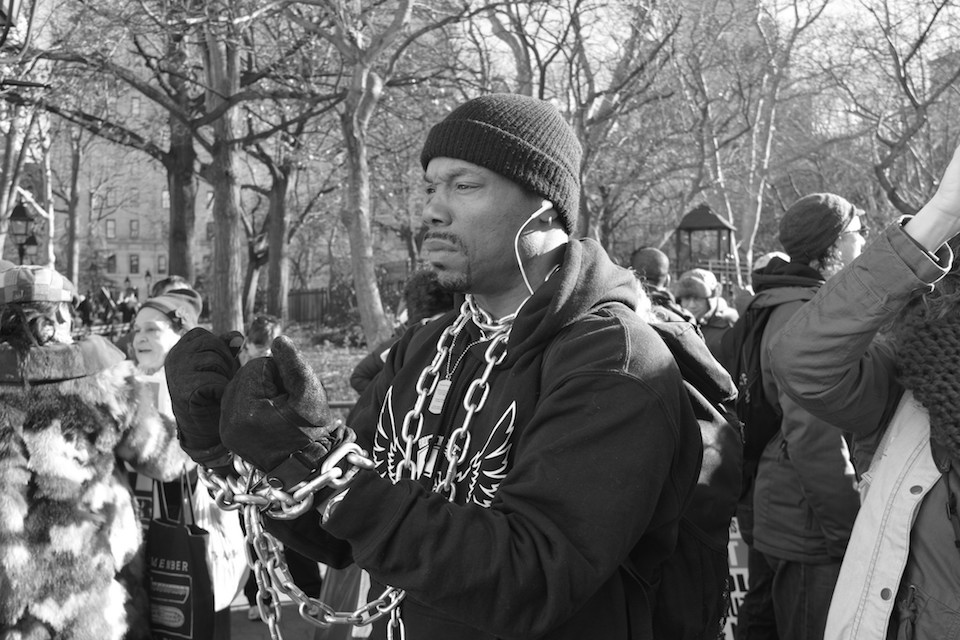 In Chains, by Marcela, Creative Commons

Many years ago, I was waiting in Boston’s Park Street T-station on my way to Cambridge, when a group of African-American teenagers came down the stairs.

They were a swarm of loud, boisterous kids. Was my reaction one of amusement? Or perhaps happiness at seeing so many young people having a good time? No. I had a white person’s reaction. I felt myself tense. I moved away from the group. I gripped my luggage bag tighter. Honestly, I was a bit afraid.

Then suddenly I caught myself. What was I doing? These kids weren’t bothering anybody. They weren’t even aware I was there, they were too busy laughing and singing with each other. I relaxed, they caught their train, I got my train and that was that.

But my reaction bothered me deeply. I asked myself over the few next days why had I reacted in such a negative, bigoted way. Then it began to dawn on me that almost all the news or entertainment I had seen about African-Americans was biased against them. This was pre-The Cosby Show, pre-Obama, pre-any positive depictions of African-Americans. They were drug dealers, they were violent, you couldn’t trust them, they would rob you or hurt you just as soon as look at you, etc.

And although I had several good African-Canadian friends back home, and had reported on the large black community in Halifax for many years and so should have known better, these negative images were planted in my mind. Worse, because I had quietly let them infiltrate my thought process, they were affecting the way that I acted.

But that’s how racism works, especially institutionalized racism. It’s like an unseen deadly virus. Many people, including myself, would never consider ourselves racist or bigoted. The very idea would seem laughable. We have black friends, we follow black sports stars, we listen to black singers and performers, we read black authors.

Many good things have happened over the past quarter-century. There are many more black men and women in positive roles on TV and in movies. America elected a black president. Many African-Americans earn an income that would’ve been unthinkable in the 1960s. Donald Trump was wrong when he said that African-Americans have never had it so bad, which only illustrates another subject on which he is ignorant.

Yet I find myself pessimistic, some 25 years after I stood in the Park Street T station, that America will ever be able to deal effectively with its racism problem. Racism is THE problem that the haunts this country, and has since its birth.

Now Trump and the alt-right movement have opened a Pandora’s box of racism and bigotry, and made it okay again for people to be openly racist, in a way they’ve haven’t since the 1950s. Add to this vile brew the repeated shootings of unarmed African-American men by police across the country, and the unhinged often hysterical reaction to Pres. Obama, and America’s long-standing racist streak has been laid bare again.

Perhaps the moment that illustrated this best recently week was the Trump campaign’s Ohio State official who, on camera, claimed that racism “had not existed” in the United States before Pres. Obama, and that Obama was to blame for all its current manifestations. When she was growing up, she continued, she never saw any racism.

This is, of course, ridiculous. But the fact that a person involved in a presidential campaign in a somewhat important regional role thought it would be okay to make such a statement illustrates how much many Americans have lost their way.

A couple of days ago a friend of mine, an African-American university teacher who is normally the voice of calm reason in such events, who tries to keep a cool perspective on the racism question, reached the breaking point. They were angry and they let everybody know they were angry in a voice that shocked me. And I thought to myself, if this person is saying enough is enough, then we are just in the beginning of what might be a very bumpy ride for white Americans.

It’s not as if we don’t deserve it. We’ve been asking for it for a long, long time.