Our Time to Rebel 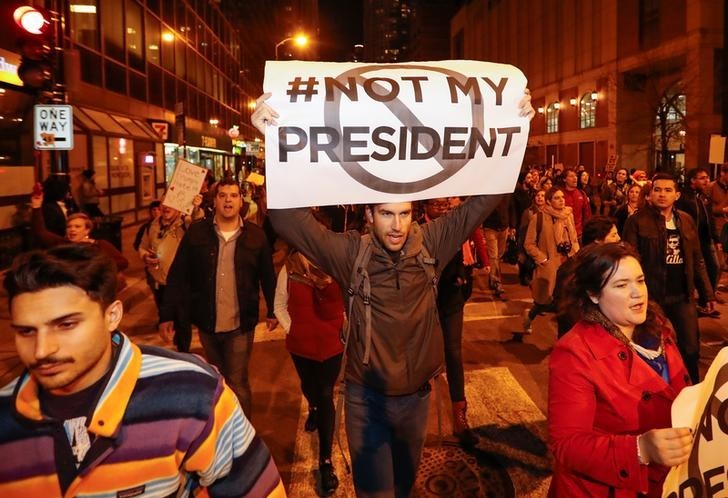 It was the evening of the inauguration of the new president of the United States, Barack Obama. But these Republicans were not there to celebrate. They were there to plot.

The plot they concocted was to oppose the new president on EVERYTHING, even if this opposition was in opposition to their previous positions.

And for the next eight years, this was exactly what they did. For some far-right members, the opposition sometimes didn’t go far enough. Any sign of compromise or agreement on any issue was greeted with howls of “traitor” or “RINO.” Members who sinned were threatened with a primary challenger.

By and large, it worked.

The circumstances are somewhat different. Democrats, of any strip, control nothing in Washington: not the presidency, not Congress and soon not the Supreme Court. Any plan of opposition must come from the grassroots, from the millions who did not vote for Donald Trump, who will lose the popular vote by almost 3 million when all ballots are finally counted. That’s a staggering number that shows the flaws in the U.S. Electoral College system.

Personally, I would advocate a somewhat different approach to our ‘rebellion.’ I would not oppose Trump on everything. Leave room for the infrequent policy that might aid the entire country. But I don’t think we Democrats need to worry about getting along that often. Considering the comments he made before and after the election, and the quality (or lack thereof) of the men and women he has chosen for his cabinet and top governmental positions, there will be more than enough to fight against. The environment, voting rights, civil rights, abortion, foreign policy, economic policy … a veritable cornucopia of progressive accomplishments need to be defended.

This will be a ‘take no prisoners’ fight. Please make no mistake about that. Trump and his minions have already shown that they will lie, obscure the truth, manipulate and deny facts, and threaten all who oppose them. And then there are the attacks and threats to be launched by his slavish, zombie-like, mainly-white-supremacist alt-Reich followers. They are the ones that those of us opposed to four years of Donald Trump insanity really need to be aware of.

There are several ways to participate in this peaceful ‘rebellion.’

Two former Democratic staff members have written a guide on how to fight Trump and the Congress, using ideas and strategies practiced by the Tea Party. The authors wrote “Indivisible: A Practical Guide for Resisting the Trump Agenda” (see link below) because they understand that many, many people “want to do [their] part to beat back the Trump agenda and understand that will require more than calls & petitions.” Indivisible is a practical guide on how to politically organize, and how to make your local Member of Congress listen.

There are other ways. Engage with Trump supporters on social media, challenge their lies and misinformation campaigns. Be prepared to be called every name in the book – that is the way they operate. And be smart about it. If you’re worried about retaliation (a legit concern) read about ways to hide your identity online.  Be careful not to join them in the gutter – it’s not a pissing contest. Just jam facts at them not-stop.

There is another tool you can use, a tool that Donald Trump himself seems to fear: humour. Trump cannot stand being made fun of. His sense of self is so shallow that making fun of him drives him to distraction.

A friend suggested to me that Alec Baldwin can do more for the country by just doing his Donald Trump impersonation every night, than all the protests and other rebellious acts might accomplish. Trump would spend so much time tweeting his angry responses that he might not have time to destroy America. I wish that it would work, but to be honest I’m more worried about the people around Trump than I am about Trump himself. Trump is an orange-coloured buffoon. But many of those around him are hard-core, far-right ideologues. They are the ones this rebellion will spend most of its time confronting.

We are, you see, (to borrow a current pop culture idea) the real Rebel Alliance. We’re not going to steal any plans for Death Stars, or fight on one of the moons of Endor.

But we can confront a group determined to accumulate power at the expense of many others. A group that actively seeks to undermine the gains of decades of struggle for women and minorities. A group that seeks to make the rich richer, the poor poorer, and drag us back to the 1950s, if not earlier.

This is our moment. We cannot look the other way. The call to action is the call for us. And how we choose to answer it will determine what America will look like, for generations.

Indivisible: A Practical Guide for Resisting the Trump Agenda: https://docs.google.com/document/d/1DzOz3Y6D8g_MNXHNMJYAz1b41_cn535aU5UsN7Lj8X8/preview#heading=h.he8mndfdfxw9

12 Ways To Protect Your Identity On Social Networking Sites: http://blogs.hrblock.com/2016/02/04/12-ways-to-protect-your-identity-on-social-networking-sites/