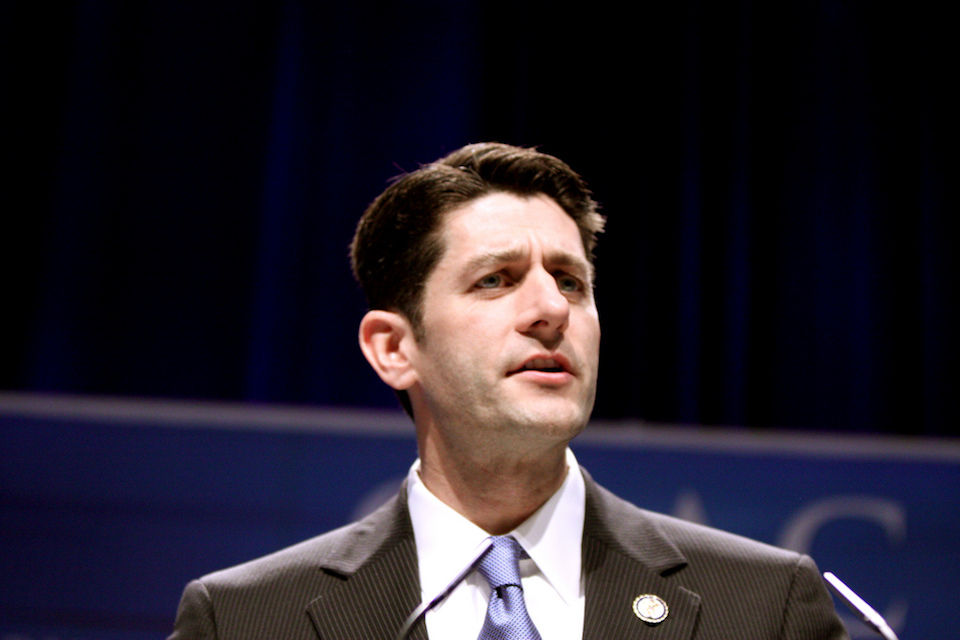 If Paul Ryan hadn’t made his own bed, as the expression goes, one might be tempted to feel sorry for him, writes Tom Regan. Photo by Gage Skidmore, Creative Commons

After the 2016 elections, GOP members must have felt like they were in Utopia. Donald Trump won the presidency, and the party kept control of both the Senate and the House. Soon they would be able to nominate conservative Supreme Court justices who would cement their hold, for at least another decade. They controlled everything.

But as my politically involved father said to me many times, there is a big difference between running for election and governing. And I would add a saying attributed to philosopher Thomas Carlyle: Be careful of what you wish for, for you will get it.

We are now less than two months into the new GOP-controlled everything world. It is a mess.

The president has twice had his anti-Muslim travel banned blocked, mainly because he and his advisors can’t stop saying that it actually is an anti-Muslim travel ban, which is highly unconstitutional. Trump’s accusation that then-President Barack Obama had wiretapped his phone in Trump Tower has been shot down by every knowledgeable intelligence source, both Republican and Democrat, yet Trump continues to insist it is true. (Trump never admits he is wrong about anything, which he learned from his mentor, the totally despicable Roy Cohen of McCarthy-era fame.)

Trump’s new budget, which wants to kill every social program known to humanity, especially if it involves seniors or the poor, is already being denounced by … you guessed it, members of his own party. And Politico ran a story on Wednesday that the White House is a hotbed of paranoia, with people leaving their government-issued smartphones at home for fear of being bugged, and everyone is afraid that everyone else at 1600 Pennsylvania Ave. is out to get them.

Then there is Paul Ryan. Poor Paul Ryan. If he hadn’t made his own bed, as the expression goes, one might be tempted to feel sorry for him. His bill to repeal the Affordable Care Act – hereafter known as Trumpcare – is going down in flames because he can’t keep all the Republicans happy at the same time. Meanwhile he must deal with a president he doesn’t like who governs (if you can call it that) with his finger perpetually in the wind. While Trump might pledge total support for Ryan’s bill, Trump’s idea of “total support” is different from most other people’s. Basically, if Trump thinks the popular thing to do is abandon the bill, he would drop it faster than the human eye could follow.

Which all brings to the first point of all this: the GOP is discovering that after years in opposition they actually don’t know how to govern, because governing involves compromise. Which leads to the second point: the GOP has many members who see compromise as a deal with the devil, and will not compromise with anything, even when it is in their own best interests.

This what happens when you allow major parts of your party to be taken over by ideologues, as the GOP has with factions like the far-right “Freedom Caucus” in the House and senators like Rand Paul, Ted Cruz and Mike Lee.

Compounding the problem is that the GOP has no one to blame but itself. They don’t have Democrats to kick around anymore, so their knives are turning on each other. The House looks ready to blame the Senate for the upcoming failure of Trumpcare. Meanwhile senators like Susan Collins, Lindsey Graham and John McCain are not just going along with whatever Trump or the House wants. And for McCain and Graham, it’s personal, as they were both insulted by Trump. They are using those insults as motivation to go after Trump on the possible associations between members of his own staff and the Russians during the 2016 election campaign.

Meanwhile, there are a few senators who plain don’t like each other. Just yesterday McCain accused Rand Paul of working for Vladimir Putin because Paul voted against Montenegro becoming a member of the NATO alliance. And everyone hates Ted Cruz on principle.

It’s only going to get worse. The one thing all politicians care about more than anything else is their own skin. And members of the House and Senate up for re-election in 2016 are already feeling the stigma of being connected to Trump and his harebrained priorities. They are going to be very careful about jumping aboard what already looks like a sinking ship, which will only anger other, more ideological oriented pro-Trump members. Add in the mix a White House so divorced from reality it could be an attraction in Disneyland, and we might have a real bloodbath before it’s all over.

There is a warning in all this for the Democrats: be careful of the party becoming too ideologically “pure,” because when the party returns to power, as it will someday, it will face the same kind of schisms.

Remember, governing is about compromise.  And, don’t gloat, or figure that you can just sit back and watch the GOP blow itself up. That’s what you thought Trump would do in 2016. How did that work out for you?

I tell the Dems the same thing I tell my kids. Work hard. Listen. Set achievable goals. Don’t read your press clippings. And things might work out OK.