Deja glasnost all over again

“I bet the hardliners in both our countries are bleeding when we shake hands.” — – Ronald Reagan to Mikhail Gorbechev at their first meeting in November, 1985. 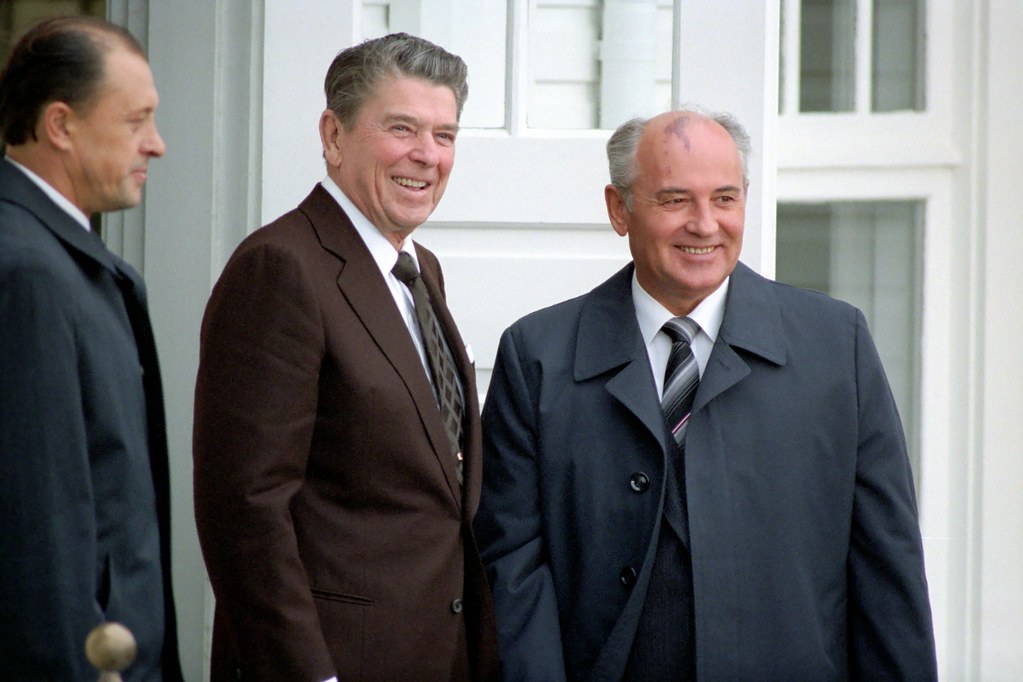 It’s never easy making peace with an enemy. And it takes great moral courage to make the decision to do so, for no matter how good the intentions or necessary the initiative or useful the agreement , there will always be a cacophony of voices decrying your every step.

We have certainly seen this scenario in the current negotiations between the Obama administration in the United States and the Rouhani administration in Iran about Iran’s nuclear ambitions. No doubt some of the opposition to these negotiations is rooted in genuine concern about the veracity of anything that the Iranian regime says. There is more than enough evidence that Iran has been less than forthcoming about its nuclear plans in the past, and is without a doubt one of the leading supporters of anti-Western individuals and groups, many of which are terrorist in nature.

But conditions change, and the economic sanctions imposed on Iran through the United Nations and by individual countries, combined with the current free-fall of world oil prices, along with the growth of the anti-Shia Islamic State of Iraq and the Levant, led to a situation where an economically-crippled Iran was more than likely to acquiesce to certain demands about its nuclear project then it would have been in the past.

As I said above, however, there will be some people who will only see calamity and disaster, regardless of the reality of the situation. One only has to think back to the Ronald Reagan – Mikhail Gorbachev negotiations about nuclear weapons in the mid-to-late 80s to remember how loud these voices of doom and destruction can be. While in 2015 Ronald Reagan has become an untouchable icon for conservative hardliners, many of them seem to have forgotten just how outspoken they were when Reagan dared to do the unthinkable. At least the unthinkable in their worldview.

Peter Beinart wrote a great piece1 for The Daily Beast in September 2013 about how the conservatives who hate what Obama is doing today, also hated what Ronald Reagan did 30 years ago:

“ But the same “Reaganites” who will bash Obama for compromising with Rouhani once bashed Reagan for compromising with Gorbachev. As late as December 1987, Charles Krauthammer was writing that “the fundamental misconception about Gorbachev is that he has somehow broken the ideological mold.” Until virtually the day the Soviet empire collapsed, Rep. Dick Cheney was calling glasnost a fraud. In 1988 George Will accused Reagan of having “accelerated the moral disarmament of the West … by elevating wishful thinking [about Gorbachev] to the status of public policy.” When Reagan brought the intermediate missiles deal to Congress for ratification, a right-wing group called the Anti-Appeasement Alliance took out newspaper ads comparing Reagan to Neville Chamberlain.”

The tired Neville Chamberlain analogy, so popular among hard-core conservatives in all similar situations since at least the end of World War II, is back with a vengeance.2

Numerous GOP politicians have been bandying the name around like a beach ball in the bleachers of a Red Sox game, while that paragon of misinformation Fox “News” has been doing non-stop numerous variations on ‘Barack Obama – Neville Chamberlain: Separated at birth?’ Meanwhile, that master of mendacity, Israeli Prime Minister Benjamin Netanyahu, has said the deal confirms “his worst fears.” Mind you, he would’ve said that even Iran had agreed to totally destroy every single weapon it owns of every kind. While it is important to take the concerns of the Israeli government into consideration in the deal with Iran, the most important considerations must be America’s, not Israel’s.

The deal that was reached Thursday between United States and its allies and Iran is just the first step of a long process. (The Reagan-Gorbachev agreements took more than two years.) It still might not work. Getting to this point was difficult when you consider the hostilities that exists between the two sides. But we did get here. And more than a few voices are saying it is a very good deal indeed.3

We owe it to current and future generations of Americans, Europeans, Iranians, Israelis, and many other people to do our best to find a way to peacefully resolve the situation.

Hard-line conservatives will always see peace as weakness. But that is in fact the weakness of their position.

UPDATE: A technical error, which removed the quotation marks around Peter Beinart’s comment, has been corrected.