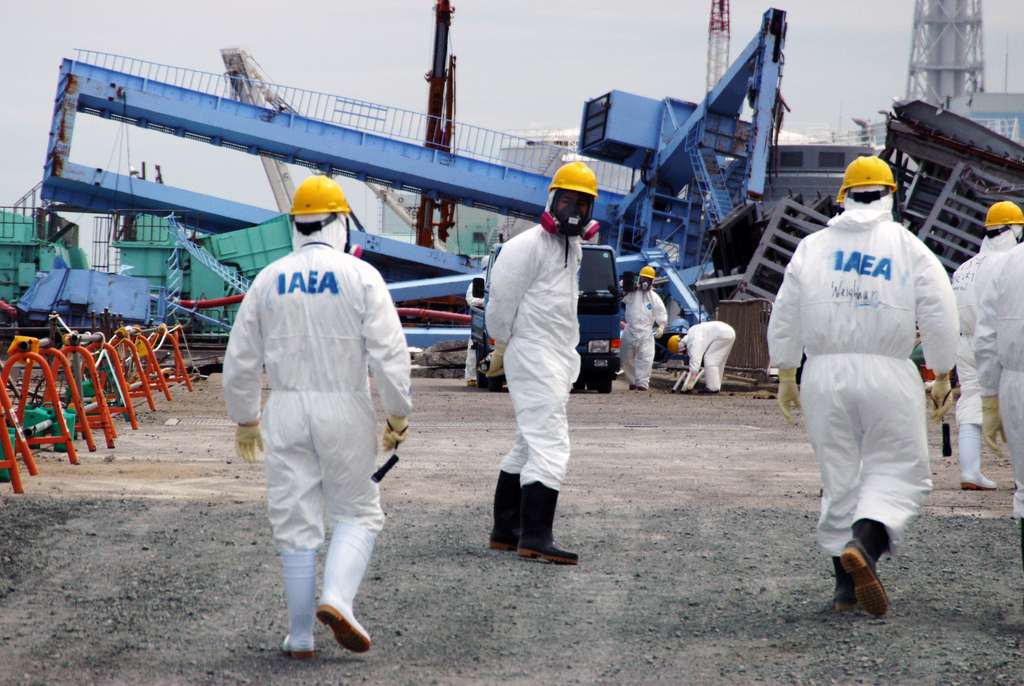 Members of the IAEA fact-finding team in Japan visit the Fukushima Daiichi Nuclear Power Plant May 27, 2011, to examine the devastation wrought by the 11 March earthquake and tsunami. Copyright: IAEA Imagebank, photo by Greg Webb IAEA

Despite the $188 billion cost (and counting), engineers haven’t even been able to build a robot [1] that can survive radiation inside the plant long enough to send back images of the inferno. Apparently nothing that moves can operate in such a hot and radioactive environment — much less a human, who would be dead in seconds.

We do know that fuel in at least two out of three of the reactors melted right through the reactor floors. Time Magazine reported in 2011, “that means that…the fuel itself lies in a clump [2] — either at the bottom of the pressure vessel, or in the basement below or possibly even outside the containment building. Engineers don’t know for sure…” Fuel rods won’t explode [3], but they can burn if exposed to air, producing massive clouds of radioactive smoke.

On February 13, 2017, muon tomography images offered a slightly clearer picture [4], but not much more hopeful. TEPCO learned that radiation levels at reactor number two were actually emitting about 530 sieverts [5], not 73 sieverts, as they had expected. Administered to a human, a one sievert dose causes acute radiation poisoning [6], and a 10 sievert dose is fatal.

Although the disaster is local, the toxins travel. Unlike other environmental disaster areas (e.g. Love Canal) Fukushima Daiichi sheds toxins daily — widely —  because every day TEPCO pours 400 tons of water over the fuel rods to keep them from overheating.

More than 962,000 tons of contaminated water are now stored on site. Last fall, TEPCO  poured 300 million tons of it into the Pacific Ocean, into currents that reach the North American West Coast. After the 2011 earthquake, the tsunami wave and the wind spread contamination broadly across the Fukushima prefecture.

Unlike Russia, Japan doesn’t have enough land to be able to sequester the damaged plants and leave them alone for centuries — the half-life of some radioactive isotopes — even if reactor number two was stabilized, which it is not.

Instead, the Japanese government evacuated people and conducted massive decontamination programs, scraping and replacing the top two inches of soil, leaving 9,000,000 bags of contaminated soil all around the area. Now it is urging 100,000 displaced citizens to return to their cleaned up villages. Not everybody is convinced that the land is safe. [7]

Greenpeace Japan noted on March 11, “this year will be the first time that some of the more heavily contaminated areas. [7]..are being opened up for resettlement….despite radiation still far exceeding long-term targets in places where decontamination work has been done.

“Levels in nearby forests are comparable to the current levels within Chernobyl’s 30 kilometre exclusion zone, which, more than 30 years after the accident, remains formally closed to habitation…”

Greenpeace measured radiation across the village of Iitate (population 6,000) which is 75 per cent forest, and found high levels of contamination [8] even in areas that had been officially decontaminated. Packs of radioactive wild boars are patrolling the empty village. [9]

Fukushima has become one of the largest of the global nuclear sacrifice zones, such as Three Mile Island and Chernobyl, which have afflicted the world since 1930. That’s when uranium refining started in Hanford, Montana, which eventually provided fuel for the first atomic weapons.

These days, the whole town of Hanford is a toxic waste supersite [10], containing some 55 million gallons of some of the world’s most dangerous radioactive wastes. The entire congressional delegation for the area has petitioned President Trump to give top priority to Hanford clean-up funding, despite the staggering $2 billion cost annually for 30 or 40 years.

Nuclear power plants have an operating life of about 30 to 50 years. Most existing plants were built in the 1970s, before anybody actually had plans for how to de-commission them. However, Reuters reported in 2011, that along with its 104 operating commercial nuclear power plants, the US also had 23 plants in the process of being
de-commissioned, at a cost of $500 million to $1 billion each, including 10 that had been “completely cleaned up.”

Seven of the remaining 13 reactors are in SAFSTOR — shut down, under guard, but still holding nuclear materials. In Canada, Quebec’s Gentilly-2 nuclear power plant and units 2 and 3 of the Pickering Nuclear Generating Station, Pickering, Ontario, are already in safe storage [11] — essentially no-human-zones although not permanently sacrificed.

However, Fukushima Daiichi is different from other sacrifice zones because of the ongoing seething nuclear reaction in reactor number two,  and because (unlike other zones where habitation is forbidden) Prime Minister Abe’s government wants people to live there.

PM Abe’s government and some media reports downplay radiation’s potentially horrifying effects on humans and babies not yet born. Public relations campaigns label former residents (mostly women, mostly mothers) who resist returning to the ostensibly decontaminated land as neurotically “radiophobic,” [12]  even though 174 children in Fukushima prefecture have been diagnosed with — or are suspected of having — thyroid cancer since the nuclear meltdown.

Meanwhile, as evidence emerges that TEPCO has lied about how serious the crisis is [13],  radiation leaks into the Pacific Ocean and the world’s airshed, and one melted-down plant at Fukushima Daiichi threatens to burst into a catastrophic nuclear fire.

“For the global nuclear industry, the Fukushima disaster is an historic — if not fatal — setback,” said Worldwatch President Christopher Flavin. He introduced a draft copy of Worldwatch’s 2011 World Nuclear Industry Status Report.

Among other points, the report noted that every single nuclear power plant under construction in the world was chosen by central planners. Not one faced any competition from local markets or alternatives. And even during the nuclear binge building years, only 41 per cent of the approved power plants ever achieved operating status. Major delays and massive cost overruns were the rule.

In the foreword, Amory Lovins wrote that “long before Fukushima, nuclear power was dying of an incurable attack of market forces.” Wind and solar devices now offer more flexibility at half the price or less.

Indeed, Lovins said, “just as computing no longer needs mainframes, electricity no longer needs giant power plants.” Instead, the Pentagon prefers to rely on a variety of mass-produced generators networked in microgrids,” for resilience. So could the public.

More troubling, though, Lovins noted that the accident “vaporized” TEPCO’s balance sheet. “A 2007 earthquake had cost the company perhaps $20 billion; this one could cost it $100 plus billion. TEPCO is now broke and is becoming, in whatever form, a ward of the state.”

If the company is “a ward of the state,” that means its liabilities  are too. Yet Japan’s government seems determined to repopulate Fukushima prefecture even as the doomed reactors overheat in the distance. Volunteer organizations like Greenpeace have to provide radioactivity monitoring for local air, water, soil and food.

On the other hand, what affects one nation affects us all. There has to be some point where the public stands up and says, “no more sacrifice zones!” The ongoing Fukushima Daiichi tragedy cries out for the United Nations to step in, take charge, and direct all the world’s best minds and resources to containing the disaster and rescuing the people who live there.

Japan Wary of Nuclear Power in Fukushima’s Wake, by  By Tatsujiro Suzuki, March, 2017