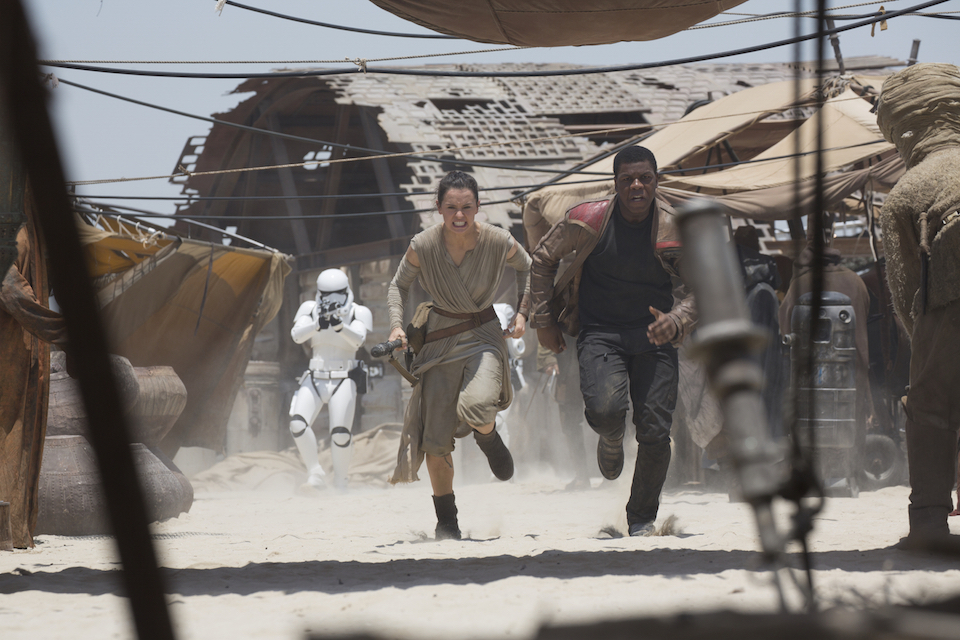 Stay with me now: Star Wars VII replicates the same plot as the first Star Wars, which has been re-named Star Wars IV: A New Hope. This time though, the supposed purpose of the search is to find SW IV’s hero, Luke Skywalker, (Mark Hamill) who (spoiler alert) appears onscreen for less than a minute.

SW VII, which I shall call Awakened Hope, is grabbing a whole new generation with story lines that are older than Hans Solo.  Actually, Hans Solo holds up his end of the story line really well. Technically, the 3D version is spectacular, providing both depth and perspective in decidedly alien worlds full of shambling, ambulating beings and machines. Objects really do pop right out of the screen. When a starship prow suddenly thrust out over our heads, I ducked – and others in the audience did too.

To my great relief, the Disney version avoids the racism and sexism in George Lucas’ three “prequels,” none of which (I confess) I could sit through.  Disney’s ease with diversity is refreshing. Star Trooper deserter Finn is no Jar Jar Binks – he’s a leading man following a leading lady.  Rey is no wife, mother or girlfriend, despite her yearning to reunite with her family.  Freed from her scanty costume and Jabba the Hutt, Princess Leia is a Cabinet minister and a military commander. Disney’s Star Wars more resembles a modern comic book than an old fashioned “boy’s own” adventure like Lord of the Rings.

On the other hand, if George Lucas provided the plot points on the story map,  Disney Corp provided the characters this time around.  In her 2001 book, Understanding Disney: The Manufacture of Fantasy, author Janet Wasko described the 10 classic Disney characters, including the all-American hero or heroine who heeds the call of duty and leaves home (Rey); the Love Interest, who starts as a perceived enemy or rival (Poe, I’m guessing); and the villain, who craves control of the universe, and who usually perishes by falling. All these characters appear in SW VII, along with the sidekick, the “hero’s naughty younger sibling,” in this case, the droids, who caper about like the dishes and cutlery in Beauty and the Beast.

Disney films usually include a Mentor figure, in this case, Maz, a female Yoda, played by the superb but unrecognizable Lupita Nyong’o. The Finn character echoes another Disney meme: he’s an orphan, like Bambi. Star Troopers snatched him as a young child, and viewers meet him as a lamb spattered with blood.

This time around, Star Wars really does represent an Empire – an empire of video games and tie-in books, which explain and embody a huge back story that seems kind of fuzzy in the movie. “The movie doesn’t do a great job explaining what’s going on,” writes blogger Zack Beauchamp, “but the answer is that it’s a lot like a proxy war situation we’ve seen in real life: A foreign country (the Republic) is supporting an insurgency (the Resistance) against a nearby country (the First Order) that it doesn’t like. Once you understand this, the plot of the movie makes a lot more sense — and the stakes for the next movie get even bigger….This is all spelled out in tie-in books and video games (both io9 and BirthMoviesDeath have helpful summaries) rather than stated explicitly in The Force Awakens, which makes the movie’s action hard to follow….”

None of this confusion seems to bother fans. SW VII is smashing box office records. Bloggers giddily speculate about Rey’s origins (“the Force is strong in her”) and her lost family. When Disney paid $4 billion for the Star Wars franchise, the company promised another trilogy.  Maybe SW VII re-states the basic story as foundation for the next two movies.

Actually, choosing a ticket for SW VII turned out to be an adventure in itself. We wanted 3D but Cineplex offers new seating options –  3D seats in AVX (special audio) and DS (rumble seats, which I guess means they shake.) How fitting! Disney Corp turned an amusement park ride (Pirates of the Caribbean) into a three-movie franchise. Now it’s done the opposite — turning a movie franchise into an onscreen amusement park ride.  Will wonders never cease?

Star Wars inspired me to become an astrophysicist, by Martin Hendry, guest column