Why Scientists Should Not March on Washington 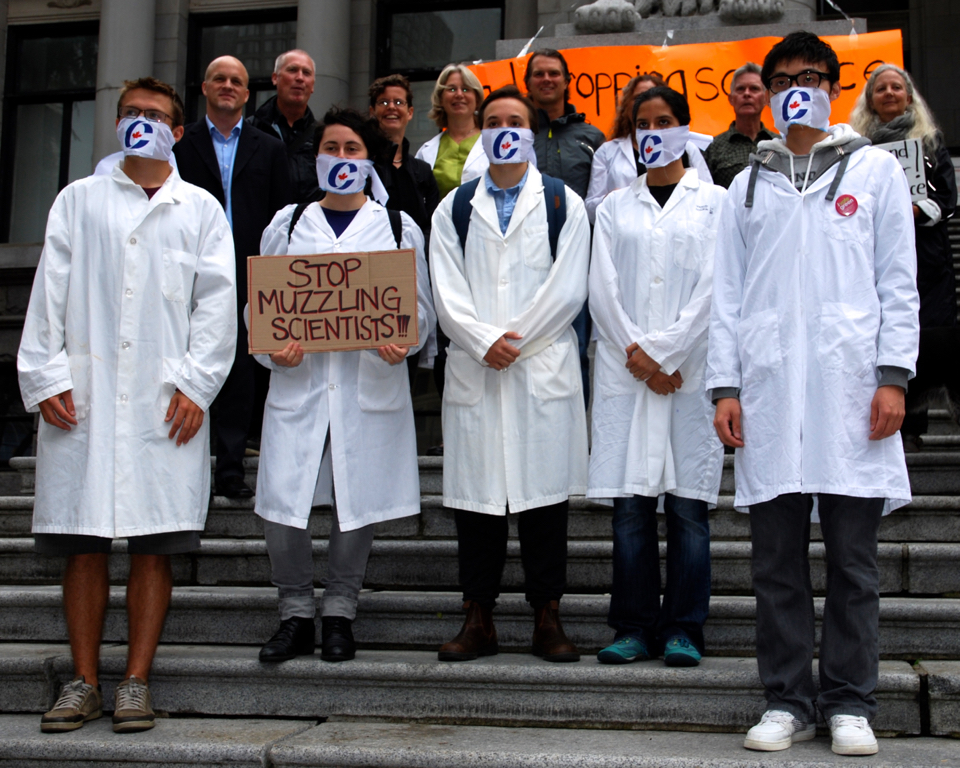 Scientists in Canada, supported by scientists around the world and global science journals, protested attempts to cut science funding and censor scientists from speaking out under Canada’s Conservative government led by Stephen Harper, who was defeated in 2015. Above, scientists from the University of British Columbia and Simon Fraser University, in Vancouver, Canada, take part in a nation-wide protest in September, 2013. © Deborah Jones 2013

The April 22 March for Science, like the Women’s March before it, will confront United States President Donald Trump on his home turf – this time to challenge his stance on climate change and vaccinations, among other controversial scientific issues.

But not everyone who supports scientific research and evidence-based policymaking is on board. Some fear that a scientists’ march will reinforce the sceptical conservative narrative that scientists have become an interest group whose findings are politicised. Others are concerned that the march is more about identity politics than science.

From my perspective, the march – which is being planned by the Earth Day Network, League of Extraordinary Scientists and Engineers and the Natural History Museum, among other partner organisations – is a distraction from the existential problems facing the field.

Other questions are far more urgent to restoring society’s faith and hope in science. What is scientists’ responsibility for current anti-elite resentments? Does science contribute to inequality by providing evidence only to those who can pay for it? How do we fix the present crisis in research reproducibility?

So is the march a good idea? To answer this question, we must turn to the scientist and philosopher Micheal Polanyi, whose concept of science as a body politic underpins the logic of the protest.

Both the appeal and the danger of the March for Science lie in its demand that scientists present themselves as a single collective just as Polanyi did in his Cold War classic, The Republic of Science: Its Political and Economic Theory. In it, Polanyi defended the importance of scientific contributions to improving Western society in contrast to the Soviet Union’s model of government-controlled research.

Polanyi was a polymath, that rare combination of natural and social scientist. He passionately defended science from central planning and political interests, including by insisting that science depends on personal, tacit, elusive and unpredictable judgements – that is, on the individual’s decision on whether to accept or reject a scientific claim. Polanyi was so radically dedicated to academic freedom that he feared undermining it would make scientific truth impossible and lead to totalitarianism.

The scientists’ march on Washington inevitably invokes Polanyi. It is inspired by his belief in an open society – one characterised by a flexible structure, freedom of belief and the wide spread of information.

But does Polanyi’s case make sense in the current era?

Polanyi recognised that Western science is, ultimately, a capitalist system. Like any market of goods and services, science comprises individual agents operating independently to achieve a collective good, guided by an invisible hand.

Scientists thus undertake research not to further human knowledge but to satisfy their own urges and curiosity, just as in Adam Smith’s example the baker makes the bread not out of sympathy for the hunger of mankind but to make a living. In both cases this results in a common good.

There is a difference between bakers and scientists, though. For Polanyi: “It appears, at first sight, that I have assimilated the pursuit of science to the market. But the emphasis should be in the opposite direction. The self coordination of independent scientists embodies a higher principle, a principle which is reduced to the mechanism of the market when applied to the production and distribution of material goods.”

Polanyi was aligning science with the economic model of the 1960s. But today his assumptions, both about the market and about science itself, are problematic. And so, too, is the scientists’ march on the US capital, for adopting the same vision of a highly principled science.

Does the market actually work as Adam Smith said? That’s questionable in the current times: economists George Akerlof and Robert Shiller have argued that the principle of the invisible hand now needs revisiting. To survive in our consumerist society, every player must exploit the market by any possible means, including by taking advantage of consumer weaknesses.

To wit, companies market food with unhealthy ingredients because they attract consumers; selling a healthy version would drive them out of the market. As one scientist remarked to The Economist, “There is no cost to getting things wrong. The cost is not getting them published”.

It is doubtful that Polanyi would have upheld the present dystopic neo-liberal paradigm as a worthy inspiration for scientific discovery.

Polanyi also believed in a “Republic of Science” in which astronomers, physicists, biologists, and the like constituted a “Society of Explorers”. In their quest for their own intellectual satisfaction, scientists help society to achieve the goal of “self-improvement”.

That vision is difficult to recognise now. Evidence is used to promote political agendas and raise profits. More worryingly, the entire evidence-based policy paradigm is flawed by a power asymmetry: those with the deepest pockets command the largest and most advertised evidence.

I’ve seen no serious attempt to rebalance this unequal context.

A third victim of present times is the idea – central to Polanyi’s argument for a Republic of Science – that scientists are capable of keeping their house in order. In the 1960s, scientists still worked in interconnected communities of practice; they knew each other personally. For Polanyi, the overlap among different scientific fields allowed scientists to “exercise a sound critical judgement between disciplines”, ensuring self-governance and accountability.

Today, science is driven by fierce competition and complex technologies. Who can read or even begin to understand the two million scientific articles published each year?

Elijah Millgram calls this phenomenon the “New Endarkment” (the opposite of enlightenment), in which scientists have been transformed into veritable “methodological aliens” to one another.

One illustration of Millgram’s fears is the P-test imbroglio, in which a statistical methodology essential to the conduit of science was misused and abused for decades. How could a well-run Republic let this happen?

The classic vision of science providing society with truth, power and legitimacy is a master narrative whose time has expired. The Washington March for Science organisers have failed to account for the fact that science has devolved intowhat Polanyi feared: it’s an engine for growth and profit.

A march suggests that the biggest problem facing science today is a post-truth White House. But that is an easy let off. Science’s true predicaments existed before January 2 2017, and they will outlive this administration.

Our activism would be better inspired by the radical 1970s-era movements that sought to change the world by changing first science itself. They sought to provide scientific knowledge and technical expertise to local populations and minority communities while giving those same groups a chance to shape the questions asked of science. These movements fizzled out in the 1990s but echos of their programmatic stance can be found in a recent editorial in Nature.

What we see instead is denial toward science’s real problems. Take for instance the scourge of predatory publishers, who charge authors hefty fees to publish papers with little or no peer review. The lone librarian who fought this battle has now been silenced, to no noticeable reaction from the scientific community.

Trump is not science’s main problem today – science is.

Andrea Saltelli has worked on physical chemistry, environmental sciences, applied statistics, impact assessment and science for policy. His main disciplinary focus is on sensitivity analysis of model output, a discipline where statistical tools are used to interpret the output from mathematical or computational models, and on sensitivity auditing, an extension of sensitivity analysis to the entire evidence-generating process in a policy context. At present he is in at the European Centre for Governance in Complexity, a joint undertaking of the Centre for the Study of the Sciences and the Humanities (SVT) – University of Bergen (UIB), and of the Institut de Ciència i Tecnologia Ambientals (ICTA) -Universitat Autonoma de Barcelona (UAB). The ECGC is located in the UAB campus in Barcelona. His latest works include Science on the Verge, a book on the crisis of science, a series of article of criticism of the Ecological Footprint  He is an Adjunct Professor, Centre for the Study of the Sciences and the Humanities, University of Bergen, University of Bergen.