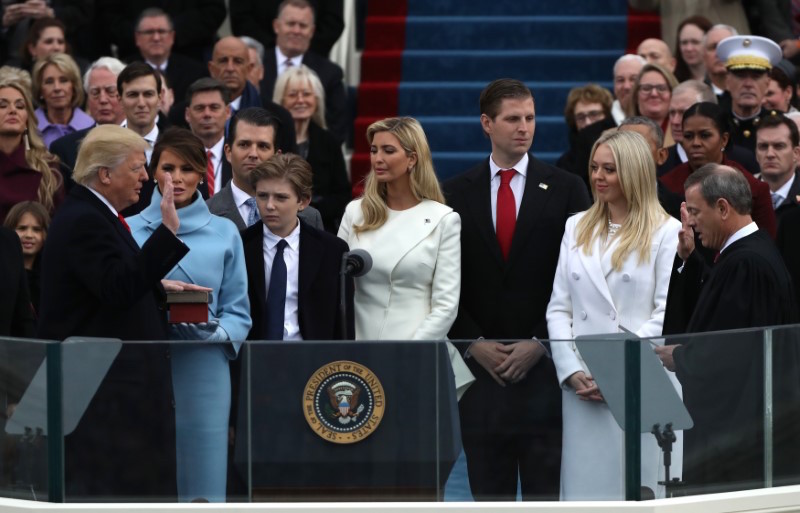 Ahead of President Donald Trump’s inaugural address, it seemed no one knew exactly what to expect.

Today was clearly an occasion for the use of the teleprompters that Trump used to mock his predecessor for employing. But, with the prepared text scrolling before him, would Trump offer the sobriety of his speech after meeting the Mexican president last August, or that of Election Night — or the bellicosity of his Convention acceptance speech? Sobriety won the day.

But the speech was much more than sober. It largely lacked lofty language, but contained a full-throated populist vision, delivered with confidence, and signaled this from the start in one of its most memorable lines: “Today we are not merely transferring power from one administration to another or from one party to another, but we are transferring power from Washington, D.C., and giving it back to you, the people.” This might be heard to echo Ronald Reagan’s 1981 statement that “government is not the solution to our problem; government is the problem,” but that would actually miss Trump’s point: The speech did not oppose government — it opposed the governors.

Perhaps the most striking element of the speech is how positive it remained throughout. Yes, it painted a dark vision of the state of the country today, accentuating the negative in this respect as almost all presidents who succeed a person of the other party do. But the blame for these ills was cast only on two domestic players: an undefined “Establishment” and, most tellingly, “Washington” and “politicians,” implicitly of both parties, “who are all talk and no action constantly complaining but never doing anything about it.”

Trump once again, as at his Convention, made a presumably conscious play for Franklin Roosevelt’s “forgotten man” of 1932. “The forgotten men and women of our country will be forgotten no longer. Everyone is listening to you now,” Trump declared. But while some on the right have tried to recast this phrase and return it to the meaning of William Graham Sumner, who used it first in 1918 to refer to taxpayers forced to pay for reforms, Trump made no such allusions. Government must be part of the solution to his promises, if only because those promises are being made by the new head of the government.

And therein lies the great risk of the speech. The new president pledged today to rid the country of the problems of drugs, crime, inner city poverty and closed factories, and to launch an ambitious program of infrastructure spending. He pledged to “eradicate completely from the face of the earth” what he predictably called “radical Islamic terrorism.” None of these promises are likely to be literally fulfilled. Trump’s pledge to “never, ever let you down” seems a dangerous echo of Jimmy Carter, who said the same thing, and received 40 percent of the vote when he ran for re-election. The question then will be whether enough has been done to avoid popular disappointment.

A striking contrast in the speech was that between its pleas for domestic unity — Trump twice called for racial tolerance — and international division. On the latter score, it is worth comparing this from John Kennedy exactly 56 years ago, “we shall pay any price, bear any burden, meet any hardship, support any friend, oppose any foe to assure the survival and the success of liberty,” with this from Trump today: “Every decision on trade, on taxes, on immigration, on foreign affairs will be made to benefit American workers and American families. We must protect our borders from the ravages of other countries making our products, stealing our companies and destroying our jobs.”

Other questions ahead of today’s speech went more to style than to substance. Would Trump be gracious and thank his predecessor, as each new president since Carter in 1977 has done? He did. Would he be afflicted by the nervous sniffling of his debate performances (and the Mexican speech), or display the self-confidence that made those exceptions stand out? He sniffled a bit, but not nearly as much as in the debates — he seemed much more confident today than he did then.

One of the few things Trump and his aides said about the speech in advance was that it would be short. In the event, it was. The President clocked in at 1,454 words. That compares with 1,366 words in JFK’s inaugural address — the most memorable of the modern era. It is far longer than FDR’s fourth inaugural, which, at 573 words, was the shortest modern address — and nowhere near Washington’s second inaugural, in 1793, which set an enduring record for brevity at 136 words. But it was considerably shorter than Barack Obama’s largely unmemorable first inaugural address (everyone, it seems, remembers the day, but, unusually for Obama, very little of what was said); that speech ran 2,409 words.

One thing was entirely predictable: how the speech would end. Anyone paying any attention at all for the last 18 months should have known its last point would be a call to “Make America Great Again.”

Richard Tofel is the author of “Sounding the Trumpet: The Making of John F. Kennedy’s Inaugural Address” and “Eight Weeks in Washington, 1861: Abraham Lincoln and the Hazards of Transition.”