Jean Béliveau, ranked as one of the world’s ten greatest hockey players in the Hockey Hall of Fame, died December 2, 2014. This is E. Kaye Fulton’s eulogy to a Canadian who was both an athlete and a gentleman. 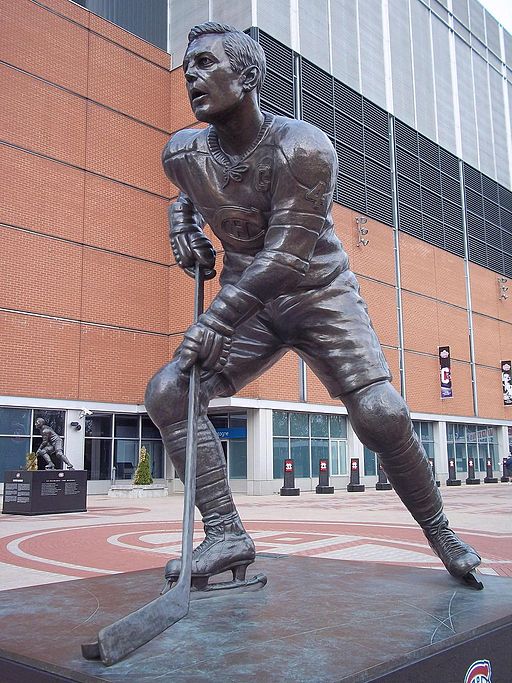 When I arrived at the Montreal Gazette as a feature writer in 1980, the legendary Red Fisher offered a blanket invitation to write anything I wanted, anytime, for the sports department. Without hesitation, I said: “I want to write about the Forum.”

In my family, the Forum was the Temple of Apollo and the guardian at its gate was the man in the photographed statue, this glorious gentleman, this unassuming and superb sportsman. I didn’t know it at the time but Red made one phone call, the only one needed, to pave the way for me.

“Make her work for it,” Red told Jean Béliveau, then ensconced in the upper management offices of les Canadiens. Magically, every door opened to me, at any hour. I bonded with Doc, an equipment manager for visiting teams, who told me how the Russians demanded their locker room be stocked with extra sticks and chewing gum they’d stuff into their kit bags. I sat alone in a sea of empty floor chairs as Tom Petty and the Heartbreakers called out to me for song requests during an afternoon sound-check. I lunched with a normally taciturn Maurice Richard who allowed me to sit on the throne – the centrepiece in Taverne 544/9 on St. Laurent – and then suddenly, as he set his crown on my head, winked. On one of the rare nights the Forum was ‘dark’, I lingered in the reds at midnight and watched in the eerie light as 23 white Stanley Cup pennants wavered like ghosts from their exalted rows in the rafters.

But the highlight of that assignment, the moments I still cannot believe transpired, was the time spent in the presence of the person to whom I owed the most and spoke to the least.

Jean Béliveau refused to see me in his office. Instead, he suggested we talk as he jogged around the top tier of the Forum on his lunch hour, which began at noon and ended, precisely, an hour later. This meant, of course, that I had to jog alongside him, which I did, huffing and puffing and staring bleakly as those long legs elegantly chewed up the distance, one stride to my five. We did this every lunch hour for two weeks. By day three I gave up carrying my tape recorder; all I could hear when I played back the tapes were my groans. By the beginning of week two, we settled into comfortable silence, not great for quote-gathering but something altogether other-worldly in terms of learning what both the man and his fabled place of work were all about.

On one of those runs, I stopped in front of a locked door we had passed innumerable times and asked to see inside. The next day, Béliveau brought keys.

Peering into the gloom with the curiosity of kids, we saw a dozen or more boxes, covered with dust and piled near the back. Inside were woolen jerseys and thick hockey socks edged in the team’s tricolours of bleu-blanc-rouge. By Béliveau’s guess, the boxes had been there, undiscovered, for as many as five decades.

Sitting amid the clutter we’d made, he told stories — not one of them about himself. His stories were about the earliest days of one of North America’s oldest and most enduring sports franchises; and of team-mates he admired for qualities above and beyond pure athleticism, among them one of his mentors, Émile Bouchard, who took up hockey at age 16 on rented skates and who rode 80 kilometres on his bicycle to attend his first training camp.

Though he appeared in only one or two paragraphs of that feature, I now realize that every word I wrote, however awkward or excitable the execution of them, was imbued with the essence of Jean Béliveau. In the years since, the love of hockey and I have parted ways. Three of my family’s most ardent hockey fans are gone; the Forum is no more; and both the game and its players have changed in ways that leave me cold. And now, now we have lost one of our game’s greatest ambassadors, even in his silence the modest, stalwart champion of doing the best you can in life. Today, I’m thinking that, at its heart, the time I spent at his Forum all those years ago wasn’t so much about a place. It was about the thoughtful preservation of history, the importance of continuity, the respect for both institution and individual. He made sure I indeed did ‘work for it’ – then, and still.

Thank you, M. Béliveau. You will be missed.

CCM Tackaberry skates worn by Jean Béliveau when he scored his 500th goal, on February 11, 1971. These are at the Lac aux Castors Pavilion, Mount Royal, Quebec, Canada. Photo by Simon Pierre Barrette via Wikipedia, Creative Commons 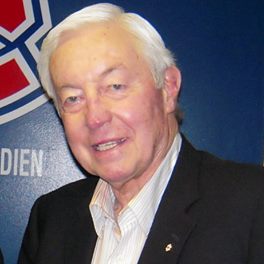