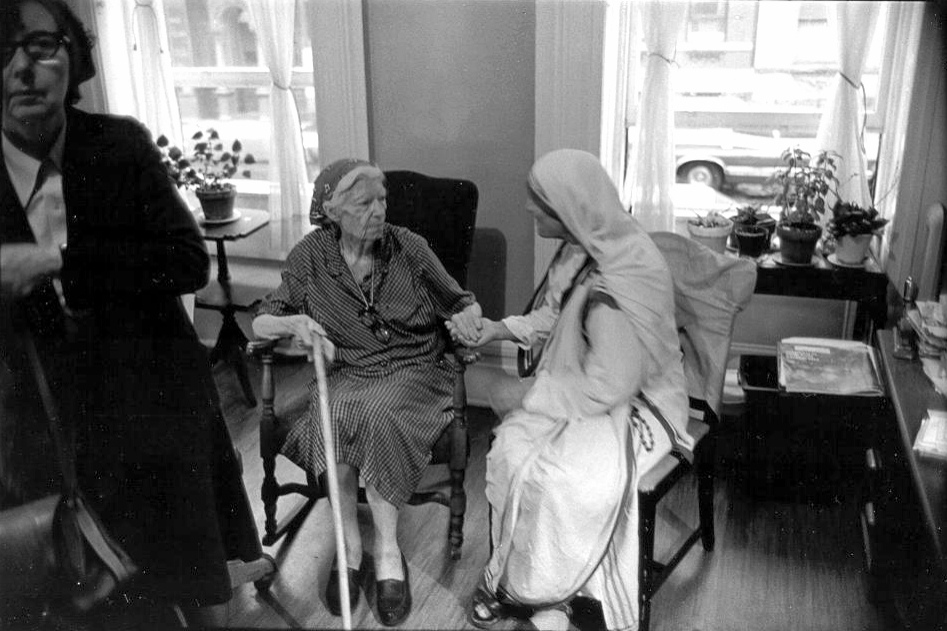 Dorothy’s last meeting with Mother Teresa, in Dorothy’s room at Maryhouse in Manhattan. Eileen Egan is on the left. The photo was taken in 1979, the year before Dorothy’s death, by Bill Barrett. (Marquette University Archives via Jim Forest, Flickr) 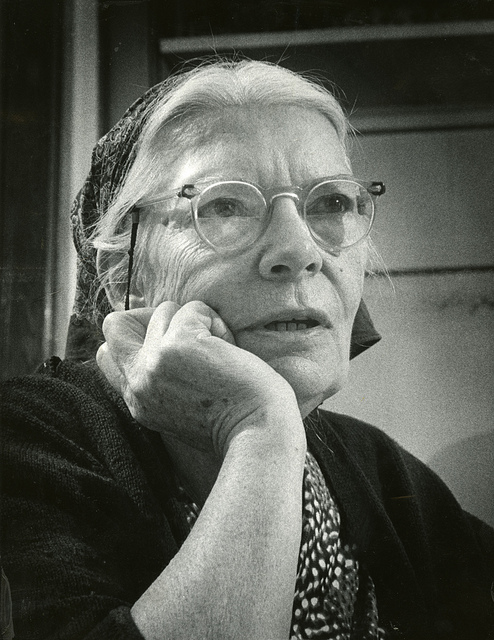 Dorothy Day in 1968. Photo by the Milwaukee Journal via Flickr, Creative Commons

It was heartening and surprising to hear Pope Francis lift up the legacy of Dorothy Day in his speech before the United States Congress. “Her social activism, her passion for justice and for the cause of the oppressed, were inspired by the Gospel, her faith, and the example of the saints,” said Francis before both houses of Congress.

Perhaps this was the most subversive part of his speech — celebrating a little-known figure and thus reviving interest in what Dorothy Day stood for. And if we truly heed the teachings of Dorothy Day, we would radically transform our society and economy.

I first met Dorothy Day in the kitchen of Mary House, the Catholic Worker soup kitchen on New York City’s Bowery district. More important, I worked for decades along side people deeply shaped by Dorothy in the Catholic worker movement.

I first read The Catholic Worker newspaper, founded by Dorothy Day and Peter Maurin, when I was 16 and working at a summer camp. It had a huge personal impact on me. Within two years, I was living at a Catholic Worker house in Worcester, Massachusetts called the Mustard Seed, serving soup to homeless men.

At the core of Dorothy Day’s life was a commitment to the “works of mercy”: feeding the hungry, caring for the homeless and those in need. But she was also outspoken about the systemic inequalities, the dangers of predatory capitalism, and wealth idolatry.   She drew from Catholic social teachings, including personalism, subsidiarity, and nonviolent economics.

The Catholic Worker movement was forged in the social upheaval of the early 1930s and the Great Depression. Dorothy, a radical journalist, converted to Catholicism to the puzzlement and wonder of her former comrades on the Left. Yet she was frustrated her entire life by the institutional church and its reticence to stand with the poor as Jesus called his followers to do.

She and her cofounder, a French peasant named Peter Maurin, called for a “personalist revolution” — an idea rooted in the Gospel, that people should be responsible for one another. Instead of creating a large beneficent state to feed the hungry, it was everyone’s personal responsibility to help the needy. She believed government had a role as last resort, but at the core, we are all responsible for one another. In this, Dorothy stood by the principle of subsidiarity, that problems should be solved as locally as possible. Only when local communities and systems fail, should we look to higher forms of government.

For Dorothy Day, nonviolence was not simply related to war — about which she was an outspoken opponent — but an entire economic philosophy. She was the first person I heard talk about “nonviolent economics,” the idea that we should look at the violence caused by economic systems and structures. “Our current forms of economic ownership — of land, housing, capital and exploitation of labor — further injustice and violence,” she said. She believed that “there is a social mortgage on capital,” that society has a claim on private wealth, since it comes from the commons.

When asked about her program for change, Dorothy argued we should “build a new society in the shell of the old.” She would resonate today with the work of the local new economy movement, creating worker cooperatives and anchored enterprises inside the shell of the corrupt Wall Street economy.

I saw Dorothy speak near the end of her life. She was in her late 70s, and her face was thin and white. She sat primly in a white rain jacket, a scarf around her hair. She spoke with intense dark eyes, unsmiling, as she responded to the interviewer’s questions with carefully chosen words. It was fresh, radical, ironic and unvarnished.

Dorothy had a deadpan way of speaking about great injustice. She quoted from the lives of saints and radical political theory, yet sprinkled in literary references to James Joyce and Dostoyevsky. Her direct manner of talking about rich and poor — from an intimate knowledge of both — broke the cultural taboo of talking so frankly about class. Robert Ellsberg, a former editor of The Catholic Worker told me, “She always talked like that, whether she was talking to a large group or one-on-one.”

Before the U.S. Congress, Pope Francis spoke of Dorothy Day and celebrated her in his comments about inequality and climate change, calling for an “integrated approach to combating poverty, restoring dignity to the excluded, and at the same time protecting nature.”

Some suspect that Pope Francis may be laying the groundwork for the canonization of Dorothy Day, but we don’t need saints to combat inequality, eliminate poverty, and address the climate crisis. By lifting up Dorothy Day, Pope Francis is reminding us that each of us have a personal and civic responsibility to reverse extreme inequality and build an ecologically sustainable economic system that serves the common good.

When people said to Dorothy Day that she should be sainted, she had a straightforward answer: “No thanks. I don’t want to be dismissed so quickly.”

I think what she meant was, “I’m human, I’m nothing special. Anyone can do what I’m doing. Why not you?”

Chuck Collins is a senior scholar at the Institute for Policy Studies (IPS) and directs IPS’s Program on Inequality and the Common Good. He is an expert on U.S. inequality and author of several books, including Economic Apartheid in America: A Primer on Economic Inequality and Insecurity, co-authored with Felice Yeskel. (New Press, 2005).

This story was first published by the Institute for Policy Studies, and is republished by F&O with permission.

Watch Pope Francis’ address to the US Congress: