Pete Seeger: Farewell to a Giant

In June, 1969, I was rattling away at my old Remington manual typewriter when my five-year-old daughter Leslie wandered into my workroom.

“What are you doing?” she asked.

“I’m writing a letter to Pete Seeger,” I said. I was hoping that Seeger would consider a benefit concert for The Mysterious East, a dissident magazine in Canada’s Maritimes that I helped to edit. At five, Leslie already knew and loved Seeger’s music, especially his children’s album Strangers and Cousins. 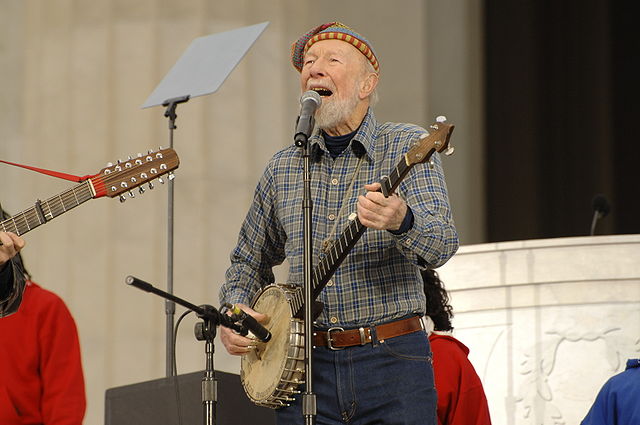 “You tell Pete Seeger,” she said gravely, “that I’m having my birthday — and he can come!”

So I wrote that down, and Seeger’s wife Toshi wrote back to say that Pete was over-committed and couldn’t take on anything more. And then, much later, Leslie got a letter from Beacon, New York — a single sheet of paper, bearing a flowing, freehand drawing of a guitar, and the words, “Happy Birthday, Leslie! From Pete Seeger.”

In 1969, Pete Seeger was 50 years old, and already a legend. His passion for folk music began in the Dirty Thirties, when he dropped out of Harvard to become a researcher with the Archives of American Folk Music, and then an itinerant musical rebel. Armed with banjos, guitars and harmonicas, he and like-minded musicians — notably Woody Guthrie — sang for desperate Okies from the dust bowl, for migrant farm workers in California, for industrial workers organizing unions.

When he was drafted and posted to the Pacific in 1942, Seeger sent home collections of soldier songs for the Almanac People’s Music Library. That venture gave rise to the folk music magazine Sing Out!, which recently celebrated 51 years of publication. Seeger, who has a scholarly turn of mind and an endless curiosity about folk music and its origins, frequently wrote articles for Sing Out! Some were collected in The Incompleat Folksinger (1972), an ever-stimulating record of Seeger’s postwar adventures in music.

“The whole lesson of folk music,” Seeger writes, is that “the genius of a few is not so important as the genius (and honesty) of the many.” Such radical notions — that culture and creativity are found in all people, not just in a well-schooled elite — soon made Seeger a prime target for McCarthyism.

Seeger is American to the backbone; his Puritan ancestors arrived on the Mayflower. Nevertheless, his folk group, The Weavers, was barred from TV, and in 1955 he was subpoenaed by the House Un-American Activities Committee to testify about his “subversive” beliefs and connections. When Seeger declared that the Committee had no right to ask a free American such questions, he was indicted for contempt of Congress and sentenced to prison — though the case was eventually dismissed on a technicality.

Isolated and reviled, Seeger kept singing and writing — and his songs continued to evoke the best and truest qualities of the American spirit. Talkin’ Union Blues. Turn, Turn, Turn. Where Have All the Flowers Gone? In 1969, when environmental issues were barely on the political radar screen, Seeger and his friends launched a traditional Dutch sloop, the Clearwater, and gave waterborne concerts promoting the clean-up of the Hudson River. They succeeded: people fish in the Hudson again today, and the fish is apparently edible.

Years passed. Senator McCarthy became a half-forgotten embarrassment. Seeger received the Harvard Arts Medal, the Presidential Medal of the Arts, a Kennedy Center Award, and, in 1997, a Grammy for the best traditional folk album. He still lives in the log house that he and Toshi built half a century ago, and he has just released a new album, entitled If I Had A Song. The title comes from one of his most-loved songs, If I Had a Hammer. He is 82.

Listen up, my fellow geriatric hippies, all you former dope-crazed bead-draped flower-shirted anarcho-pinkos. I hereby propose a New Year’s resolution. Let us pledge ourselves to follow Pete Seeger’s example.

In both the US and Canada, governments have exploited the tragedy of September 11 to strip away the freedoms of their citizens. Terrorism is the pretext — but who can doubt that the spooks, the snoops and the cops will happily use these new despotic powers against their own people? Remember last spring in Quebec — chain-link fences protecting the powerful, while riot police threw tear gas into crowds of protesting citizens, just as they did 30 years ago.

This New Year’s Eve, remember Pete Seeger, Benjamin Spock, Linus Pauling and the others who lent their authority to our own generation’s battles against racism, sexism, pollution and war. Remember how much it mattered to have such people at your side, speaking out, marching, risking jail for justice and liberty?

This time, fellow fogeys, it’s our turn to hammer out justice, to ring out freedom. And to insist that everyone counts — even a little girl in another country, inviting you to her birthday party. 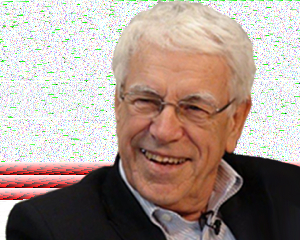 Re-published on F&O with the kind permission of Silver Donald Cameron.

Silver Donald Cameron’s literary work includes plays, films, radio and TV scripts, an extensive body of corporate and governmental writing, hundreds of magazine articles, and 17 books. He is the host and executive producer of TheGreenInterview.com. He is currently in Buenos Aires, filming a new documentary, Green Rights: The Rights of a Planet and its People.