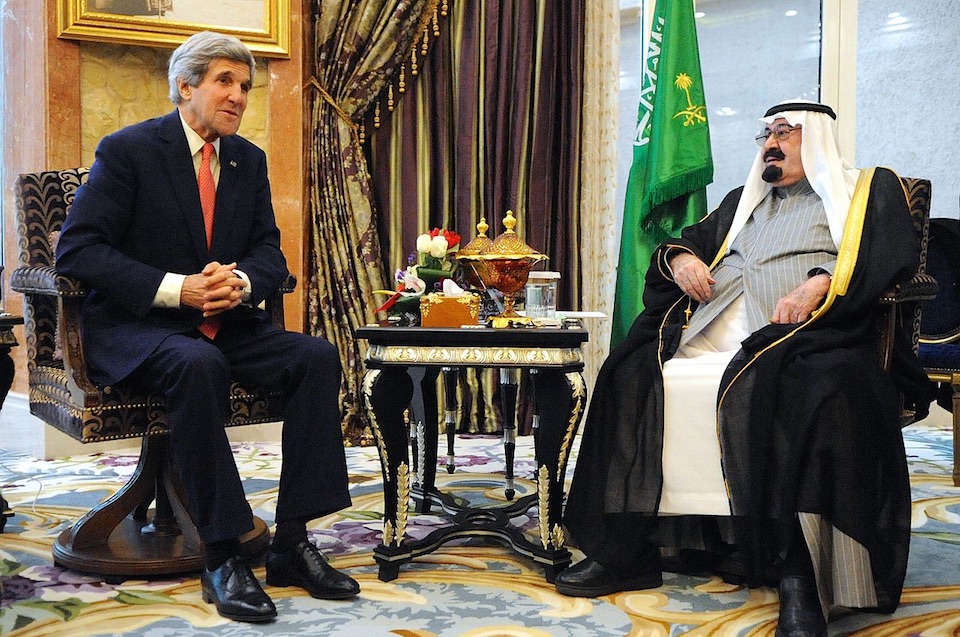 A year ago, and in his 91st year, King Abdullah, was healthy enough to publicly discharge official duties. Today, he’s in hospital. His visitor to his desert retreat, in this Jan. 5, 2014 U.S. State Department photograph, was State Secretary John Kerry.

It’s been a long time coming, but the looming crisis in Saudi Arabia’s absolute monarchy is finally in clear sight.

What has brought matters into focus was the dispatch to hospital in Riyadh this week of 91-year-old King Abdullah, who is suffering from pneumonia. The king’s months of evident ill health come after his attempt to embed some political stability in the country of 29 million people and the world’s largest oil producer by appointing not only his successor, but also his successor’s successor.

Far from providing security and continuity, Abdullah’s action is more likely to set off a potentially disastrous contest for the throne among Saudi Arabia’s princely families.

The prospect of political upheaval in Saudi Arabia is severe. Saudi Arabia is the heartland of the Sunni Muslim sect and the home of the most sacred Islamic sites. But it is has a large and restive population of Shia Muslims and is the fountainhead of the most fanatical and violent Muslim organizations such as Al-Qaida and the Islamic State group (ISG), also known by the Initials ISIS and ISIL.

Vast floods of income from its oil reserves and reasonable cohesion within the royal family have enabled the Saudi government to keep a lid on the country’s internal contradictions. But if the current halving of oil prices continues indefinitely, with resulting damage to Saudi Arabia’s patronage-based economy, and the royal family of about 15,000 princes and princesses shatters into contesting factions, then the future looks grim for not only the country but the region.

With the swift use of extreme force not only at home but also in neighbouring Gulf States, Saudi Arabia managed to snuff out sparks of the Arab Spring revolutions in early 2011. But even though most countries where the revolutions flared are either still mired in civil war or have returned to authoritarian governments, the three-cornered contest in the Middle East between modernity, theocracy and absolutism is far from over.

Saudi Arabia is a key player in this drama because of its wealth and its influence as the leading exponent of Sunni Islam in the contest for regional pre-eminence with Shia Islam, led by Iran. This contest is currently raging as wars between proxies in Iraq, Syria, Yemen and Libya.

Like many countries of the Middle East, Saudi Arabia was born out of the destruction of the Ottoman Turkish empire in the First World War. In the 1920s the Arabian peninsular remained a chaotic backwater of warring tribes. But one sheikh, Abdul Aziz bin Al Saud, better known simply as Ibn Saud, captured the major cities and in 1932 proclaimed the foundation of the Kingdom of Saudi Arabia. What had been an economy based on nomadic herding and trading started to change dramatically in 1938 when Standard Oil of New York discovered oil at Dahran.

Politically, however, Saudi Arabia remains an absolute monarchy with all major facets of government firmly in the hands of appointed royal princes.

Ibn Saud had 44 sons and innumerable daughters. Since his death in 1953 there have been five kings of Saudi Arabia, all of them sons of Ibn Saud and, in the natural course of things, all coming to the throne in their declining years.

Not all of Ibn Saud’s sons survived until their turn for the throne arrived and some have either not wanted it or have been deemed unworthy for some reason or other by the council of their brothers. Even so, Saudi Arabia is now getting to the bottom of the barrel of sons of Ibn Saud. The time is fast approaching when Saudi Arabia must move to the third generation – the sons of the sons of Ibn Saud – to find its monarchs, and that’s when things will get very messy. There are hundreds of princes in this third cohort and their sons in the fourth generation include thousands more, all of whom trace their lineage back to various wives and concubines of Ibn Saud. These emerging generations do not have the bonds of brotherhood – however tenuous those bonds are sometimes – of the current generation of kings. It seems inevitable that the royal family will shatter into lineage factions contesting for the throne and power.

The emergence of factions based on the status of the women in Ibn Saud’s well-stocked harem from whom they hail is already evident. In June, 2012, King Abdullah appointed his half-brother Salman, 78, to be Crown Prince and successor to the throne. Crown Prince Salman is the eldest survivor of what are known as the “Sudairi Seven,” the seven sons of one of Ibn Saud’s favourite wives, Hassa al-Sudairi. The Sudairi Seven are seen as the most powerful and cohesive group among the sons of Ibn Saud, and Salman’s appointment as heir to the throne suggested that the third generation kings would be chosen from among the sons of the seven.

King Abdullah is the son of Ibn Saud’s eighth wife, a young widow from the Rashidi tribe whom the country’s founder had defeated in his drive to create Saudi Arabia. Thus this was a political union rather than a love match, and King Abdullah’s actions this year have the smell of a desire to contain the Sudairi Seven ascendancy.

In March, King Abdullah created the new position of “deputy crown prince” and appointed Prince Muqrin, 71, to the post. In theory this means that Prince Muqrin, the youngest surviving son of Ibn Saud, will succeed Crown Prince Salman and thus put off for perhaps another decade or more the time when the problem of the third generation must be addressed. There was some logic behind King Abdullah’s move. Because of the weird Saudi Arabian succession system, candidates for the throne are always in their declining years. Since Abdullah has been king, two of his Crown Prince heirs, Princes Sultan and Nayef, have died in the waiting room, as it were.

So, instead of providing certainty, King Abdullah’s move has had just the opposite result. Rather than placating factionalism, it has stirred it up and increased the prospects for instability.

Partisans of Crown Prince Salman and the Sudairi Seven are claiming that Prince Muqrin’s eligibility for the throne is dubious. Although undoubtedly a son of Ibn Saud, Prince Muqrin is the son of a concubine, not a wife. And, goes the argument, Crown Prince Salman has a full brother still alive, Prince Ahmed, 72, the former interior minister and head of the country’s internal security apparatus.

What is unclear and yet to be tested is how firmly Crown Prince Salman is bound by King Abdullah’s appointment of Prince Muqrin as the next heir. It will be surprising if Crown Prince Salman and the princes of the Sudairi Seven faction don’t challenge Abdullah’s move. The gossip in the palace corridors of Riyadh is to watch the current interior minister, Prince Mohammed bin Nayef, the son of former Crown Prince Nayef, who died in 2012. Prince Mohammed thus comes from the Sudairi Seven lineage. Even though he is not the eldest of Crown Prince Nayef’s sons, he is held to be one of the most able princes of the third generation, including by United States officials with whom he has had dealings on security and anti-terrorism issues. A prince’s acceptability in Washington continues to matter in advancement in Riyadh, though perhaps not for too much longer.

So the speculation is that as king, Crown Prince Salman will rule in tandem with Prince Mohammed, grooming him to be the first monarch from the third generation. But there are several men among third generation princes, descended from a variety of wives and concubines in Ibn Saud’s harem, who now hold senior positions in the Saudi government with their own ambitions for the throne.

With this cast of characters, this plot line and these pressures, it is hard to imagine how Saudi Arabia can avoid a chaotic succession battle that ricochets through both the country and the Middle East.