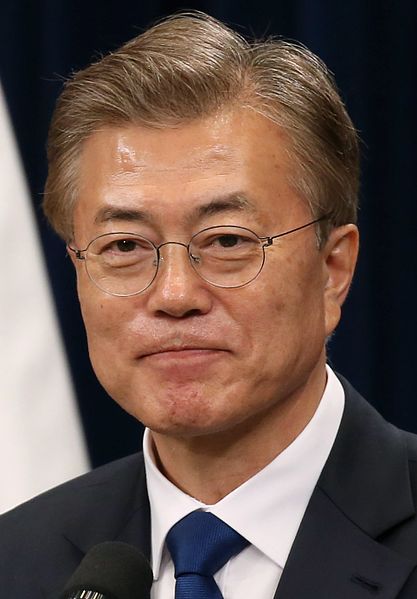 For a while it looked as though Donald Trump was the white horse on a cresting wave of right-wing demagogy rushing to break over liberal democracies world-wide.

But the defeat of Trump’s neo-Nazi fellow travellers in Holland and France, and now the election this week of a left-liberal administration in South Korea, leaves the United States President looking more like the grimy spume left on the sand by the retreating tide.

The election to the South Korean presidency on May 8 of Democratic Party leader Moon Jae-in is primarily a demand by the country’s voters to reform government, erase corruption and improve social justice. Moon’s election comes as former conservative President Park Geun-hye, who was removed from office in March precipitating this election, awaits trial on 18 charges of abuse of power, leaking state secrets and taking $US52 million in bribes.

About 80 per cent of voters cast ballots, a high proportion of them young people wanting the country’s democratic institutions revived and strengthened. As remarkable as it may seem from outside, heightened regional tension as Trump ratchets up his rhetoric and calls for “maximum pressure” on North Korea to end its nuclear missile development program, was of only secondary importance to voters among South Korea’s 50 million people.

South Koreans have got used to living under the daily threat of annihilation by the North’s massive arsenal of conventional weapons. Whether they are wiped out by high explosives or nuclear bombs is irrelevant. South Koreans’ most effective defiance is to get on with their lives, and to continue building one of the world’s most successful economies and vigorous democracies.

However, Moon’s election will give a nasty jolt to the always-precarious balance of security and political interests in the Far East between the U.S., Japan, China and South Korea.

Moon is no softy on dealing with what he calls “the ruthless dictatorial regime” of Kim Jong-un in North Korea. (Moon’s parents were refugees from the North who fled south during the 1950-53 Korean Civil War.) But he believes equally strongly that the reliance on sanctions and military threats followed by successive U.S. presidents, and pumped up to bursting point by Trump, are ineffective.

An immediate point of friction may be Washington’s deployment in South Korea last month of the Terminal High Altitude Area Defense system, or THAAD. Trump ordered the deployment ostensibly as a defence against missile attacks by North Korea, and to protect the over 28,000 U.S. troops stationed in South Korea. In an apparent attempt to appeal to his anti-foreigner followers in the U.S. Trump even said he would send Seoul a bill for $US1 billion for defending South Korea.

The deployment of the anti-missile system with its powerful radars has not gone down well with the Chinese government, on whom Trump says he is depending to force North Korea to give up its nuclear weapons. Beijing complains that THAAD is a threat to the deterrence value of its own nuclear missile system. It has imposed economic sanctions against South Korea in retaliation for the outgoing interim administration’s agreement for the deployment of THAAD.

Moon opposed the deployment of THAAD, which went into operation last week. He says he thinks the Trump regime pushed to get the missile system set up before the new Seoul administration took office to make it more difficult to get THAAD withdrawn.

At this point, Moon has only said he will review the THAAD decision, and has made it clear that he won’t necessarily insist on the removal of the anti-missile system.

He has also said that his policies towards North Korea will flow from his basic commitment to the alliance with Washington. Unlike Trump, Moon favours pursing engagement with North Korea. Sanctions, he says, should be tailored to bring Kim and his regime to the negotiating table.

In this, Moon is following what was called the “Sunshine Policy” of the two liberal presidents of South Korea from 1998 until 2008. The first, Kim Dae-jung, won the Nobel Peace Prize for his efforts to open up dialogue with North Korea. Moon served as the chief of staff to the second liberal president, Roh Moo-hyun, in office from 2002 to 2008.

President Roh attempted to establish a network of links with the North that would be hard to unravel, and which would create a seedbed on which relations could grow. These included family reunions, regular diplomatic talks, and joint economic projects such as the Kaesong industrial complex in North Korea.

At Kaesong, several of the famous South Korean industrial conglomerates, such as Hyundai and Samsung, set up factories employing over 53,000 North Koreans. There were predictions that in time Kaesong could employ over 700,000 people and become the stimulus for economic development in the North. Before her disgrace, President Park last year ordered the closure of Kaesong as part of the global attempts to get Kim Jong-un to halt his nuclear missile development program.

Moon says he wants to re-open Kaesong, but it will be difficult for him to do so. It would require a functional relationship with Pyongyang, which doesn’t exist at the moment, and also a lifting of United Nations sanctions. As things stand, it would breech UN economic sanctions to re-start or re-invest in the Kaesong project.

The Sunshine Policy never really got off the ground in the early 2000s. It suffered from lack of attention to Asia by U.S. President George W Bush during his wars in Iraq and Afghanistan. And when he did pay attention to the Korean Peninsular in a speech in 2003, Bush ignited paranoia in Pyongyang by including North Korea with Iran and Iraq in his “axis of evil” troika.

The then leader in Pyongyang, Kim Jong-un’s father Kim Jong-il, took the entirely logical position that the only countries that Washington didn’t invade were the ones that had nuclear weapons. He therefore re-started North Korea’s nuclear program, leading to the first successful underground testing of an atomic bomb in 2006.

The world’s attempts to bring Pyongyang to heel have been on a downward slide since then, and North Korea’s weapons programs have accelerated since Kim Jong-un succeeded his father in late 2011.

It is hard to see at the moment how Moon can start a new version of the Sunshine Policy without irritating not only Trump, but also Japan.

Japanese Prime Minister, Shinzo Abe, has been as worried as anyone else by Trump’s unpredictable and ignorant performances on diplomacy and foreign policy. However, Abe is also using Trump’s unreliability as an ally to push his own aims to give Japan a more active independent security policy, including recent suggestions for acquiring the ability to strike North Korean missile sites ahead of any attack launched by Pyongyang. These aims are a significant step away from the pacifist constitution forced on Japan by the U.S. and its Pacific Theatre allies after the Second World War, and are heavily frowned on by a majority of Japanese people.

The Tokyo government had been hoping that a conservative candidate would win in Seoul, and reports from Japan say officials are scurrying around trying to get a measure of Moon.

Moon’s immediate pre-occupation on taking office will be to start addressing the concerns of the people who elected him. High on the list is changes to the political constitution, which tends to create an “imperial presidency,” South Korea’s president is given great administrative powers, but is only allowed a single, five-year term. It was only in 1987 that the country began to climb out of decades of dictatorship and military rule. The single, five-year term limit was designed to prevent backsliding into dictatorships. But it has created a situation where incoming presidents are lame ducks from soon after their inaugurations, and it has tended to encourage corruption.

These tendencies exploded in full bloom during the term of disgraced president Park Geun-hye. She and her long-time friend Choi Soon-sil are accused of soliciting bribes worth $US52 million from some of the leading industrial conglomerates – the “chaebol” – such as Samsung, Hyundai and Lotte in exchange for political favours. It is also alleged that Choi exerted unacceptable influence over Park in making decisions on government ppolicy and appointments, despite having no official position.

Moon’s suggestion for preventing any re-occurance of this scandal is to emulate the U.S. and other republics by having presidents eligible to run for two four-year terms. He has also suggested that many of the president’s executive powers be devolved to beefed-up cabinet ministers.

There is also much unhappiness among many voters at the chaebol system under which a handful of largely family-owned companies control whole swathes of economic activity. Moon agrees that the chaebol system is responsible for high unemployment and low wages, and that the country should move to a more balanced industrial structure. But dismantling the chaebol is not that easy. In the wake of the 1997 Asian economic crisis, South Korea’s first “liberal” president Kim Dae-jung attempted to break up the chaebol, insisting they sell off divisions of their conglomerates that weren’t part of their core businesses, and tried to root out corruption in the companies. He was only marginally successful. Roh Moo-hyun, another liberal president, tried to go further, but he too was not completely successful and there is much left for Moon to do for South Korea to become a more economically responsive and equitable society.

The best hope for South Koreans and Moon is that Trump is so engulfed by dealing with the challenges to his political legitimacy at home that he has no time to butt heads with Kim Jong-un and the Pyongyang regime.