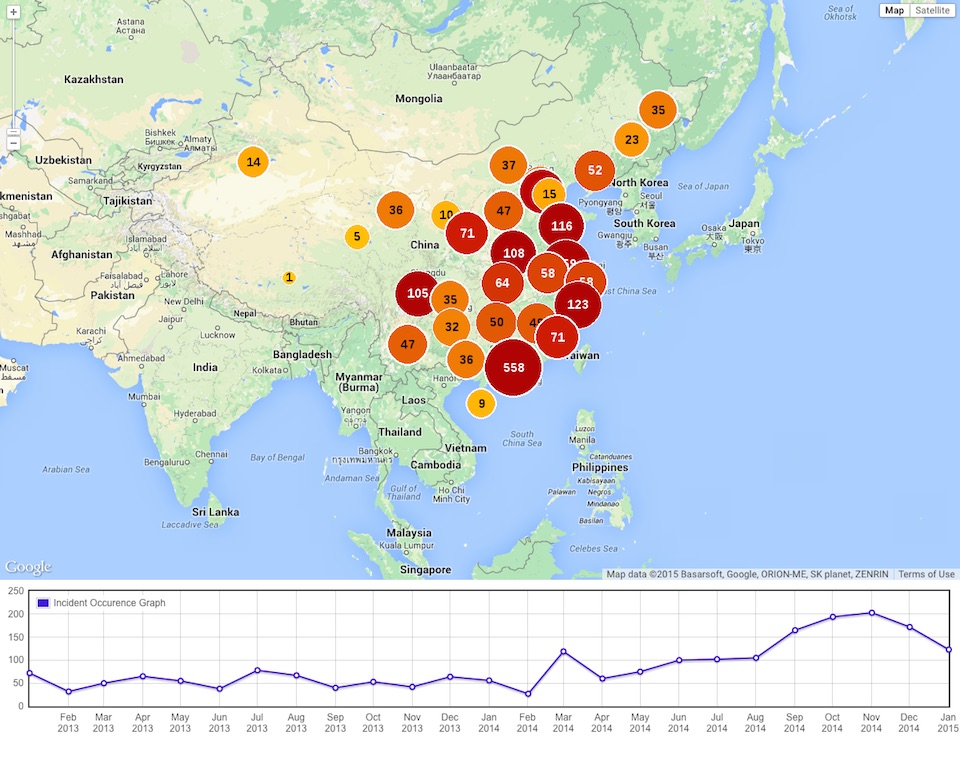 Twenty-four months of work stoppages are recorded in this graphic created from information collected and maintained by China Labour Bulletin. Its cause a Chinese labour movement independent of the Communist party, the bulletin permits the China-watcher to monitor the ordinary and everyday aspirations of a people and the apprehensions of their leaders. clb.org.hk/en/ is the address of its English-language website.

The Hong Kong-based China Labour Bulletin, which collects data on strikes and lockouts in China as well as promoting workers’ rights, says there has been a dramatic upturn in labour unrest across the country. As the country’s economy slowed to its lowest growth level since 1990, strikes and protests in the last three months of 2014 were three times those of the same period the year before.

“The dramatic upturn can be partially explained by the increased use of cheap smartphones and social media as tools by workers to get news of their protest action to a wider audience,” says the latest report by the group.

“But at the same time there is clearly an increase in labour activism in response primarily to the economic slowdown in China over the last year or so.” 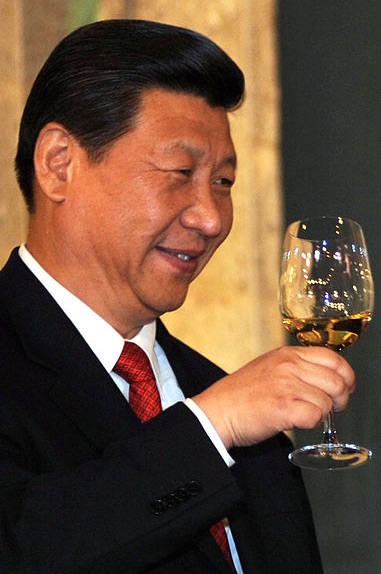 China’s top leaders have directed the party and state response to work stoppages. Xi Jinping, Chinese president and CP leader, is intolerant of dissent and inclined to silence it with violence. Angélica Rivera Hurtado, Mexico’s first lady, photographed Xi when he visited her country in 2013. WIKIMEDIA COMMONS

For at least two decades the Beijing government has agreed with outside analysts that China needs to maintain an annual economic growth rate of at least eight per cent to provide jobs for the estimated 30 million young people entering the workforce every year and to maintain social stability.

But as the growth in gross domestic product slipped to 7.4 per cent last year and is likely to hit only seven per cent this year, China’s leaders are trying to persuade the country’s nearly 800-million-strong workforce that low growth is the “new normal.”

So far, this catch phrase has not caught on with Chinese workers. The China Labour Bulletin reports that strikes and worker protests more than doubled last year over 2013. There were 1,378 recorded strikes, up from 656 the previous year. And the number surged in the last three months of 2014, with 569 incidents, compared with 159 in the same period of 2013.

Most of the labour unrest – more than 60 per cent — stemmed from sharp downturns in the manufacturing and construction industries. Real estate developers are facing declining sales as the housing market bubble deflates and manufacturers have dwindling orders as the global demand for China’s goods shrinks. The result is that many workers have not been paid for months or their employers have closed down businesses overnight and left town, a specialty of embattled Chinese entrepreneurs.

An unexpected addition to the picture of labour unrest in China last year was an increase in strikes by teachers. Teachers traditionally have high status in China, and though they may not be paid well, they are amply rewarded with kudos. That cultural phenomenon seems to be unravelling. There were 43 strikes by teachers last year, more than four times those in 2013. Some of these strikes included massive numbers of teachers, bitter at low pay and losing employment perks such as pensions.

Even with the substantial increases in strikes and protests reported by the China Labour Bulletin, the numbers still pale beside the general level of unrest in China. There continue to be about 180,000 serious protests a year across China, or close to 500 a day on average. Most are by peasant farmers rebelling against the theft of their land by local Communist Party or municipal government officials to sell to crony real estate developers at inflated prices. But increasingly there are street protests by people in towns and cities against pollution or blatant corruption by party or government officials.

The Communist Party has ridden this storm and manages the unrest by ensuring that the incidents remain local and isolated. It learned the hard way at the time of the Tiananmen Square protests in 1989 how easily demands for reform could become a national movement that threatened the survival of the one-party state. The students’ protest in Beijing spread to about 250 cities across China, though this was missed by the Western TV cameras focussed on Tiananmen Square. That was the real reason martial law was declared.

Since then, the Communist Party has been swift to destroy any movement, which threatened to become a gathering banner for protest.

In 1999 this determination prompted the banning of the Falun Gong movement, its branding as an “evil cult,” and the imprisoning – and in many cases killing – of thousands of its members.

Other reform movements, such as the demands for democratic and judicial reforms in the “Charter 08” manifesto by 350 intellectuals and human rights activists, have been slaughtered at birth.

The proliferation of the Internet, smartphones and social media is a particular worry for the Chinese authorities. As the China Labour Bulletin remarked, the widespread use of smartphones has enabled protests to be organized and crowds gathered swiftly and easily. There are many examples of this happening, especially as unrest spreads among the middle class in the cities. In April in the southern Chinese city of Maoming about 1,000 people gathered to protest the construction of a factory manufacturing the chemical paraxylene, which many believed was a threat to their health and the local environment. But through social networks and smartphones, over 20,000 people joined the protest over five days. The authorities reacted harshly. About a dozen people were killed and many were arrested in the crackdown.

There has been a marked increase in the authorities’ intolerance of dissent and the swift resort to violence since Xi Jinping assumed power late in 2012 as Communist Party leader and China’s president. That is true not only in China, but also against unrest in Beijing’s colonial outpost of Xinjiang, the majority Uigher Muslim territory in the northwest, and the Himalayan territory of Tibet. About 2,000 people died in a string of protests by Uighers last year against the government schemes to import Han Chinese settlers. After large-scale anti-Beijing riots in Tibet in 2009, more than 100 Tibetan monks have killed themselves by self-immolation in protest at what they see as religious persecution.

For the Communist Party, however, labour unrest in China may prove to be the social phenomenon they can’t stop from becoming a national movement. Traditionally, the Communist Party has kept control of labour through its All-China Federation of Trade Unions (ACFTU).

All independent trade unions are illegal and the party-sponsored body is more concerned with ensuring state-controlled enterprises have the work forces they need rather than promoting workers’ rights and wellbeing.

But at the same time in 1989 that students were beginning to gather in Tiananmen Square, a railway worker in Beijing, 26-year-old Han Dongfang, helped set up China’s first independent trade union of the Communist dynasty, the Beijing Workers’ Autonomous Federation.

The BWAF didn’t survive the crackdown on the Tiananmen Square students. Han was detained for 22 months without trial, contracted tuberculosis in prison and was released in 1991. He went to the United States for treatment and tried to return to China in 1993. But he was arrested and expelled to Hong Kong, where he still lives.

In 1994, Han established the China Labour Bulletin. He and his staff not only gather information about labour conditions and labour unrest in China, Han also promotes the organization of workers in the mainland.

Although there are as yet no independent trade unions forming in China, not publicly at any rate, there are many non-governmental organizations performing the same kind of role. The Communist Party and security authorities have launched vigorous campaigns to root them out since Xi came to power, and especially those NGOs that have foreign funding.

At the same time, Xi is demanding the revitalization of the official ACFTU, which is a tottering bureaucratic mountain, totally out of touch with the trials and tribulations faced by Chinese workers.

But labour unrest and the demand by workers for the representation of their interests may yet prove to be the most serious challenge yet to the Communist Party’s monopoly on power.