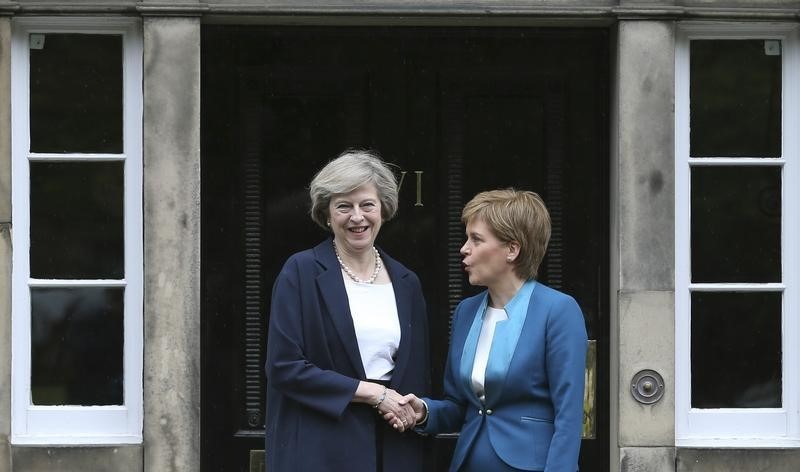 In these times of seething rage, it is increasingly likely that Britain’s divorce from the European Union will lead to the break-up of the United Kingdom itself.

As the parliament in Westminster completes the process of giving Prime Minister, Theresa May, authority to start the process of taking Britain out of the European Union, anger and resentment is intensifying in Scotland and in Northern Ireland.

Voters in both Scotland and Northern Ireland opted decisively to remain in the EU in last June’s referendum, but have been overruled by the dominant population of England. The unhappiness has been compounded as it has become clear that May is not going to try to fiddle some form of associate status with the EU and is heading for a complete separation, known to headline writers as a “hard Brexit.”

These glimpses of the road ahead have prompted the First Minister of Scotland’s regional government, Nicola Sturgeon, to say it is “highly likely” she will seek another referendum on Scottish independence. In the first referendum in 2014, Scottish voters decided by a narrow margin to remain in the United Kingdom, not least because that seemed at the time the best option for Scotland to stay in the EU. That equation collapsed when the overriding majority of disenchanted blue collar English voters chose Brexit in last June’s referendum.

The situation is particularly fraught in Northern Ireland, where Brexit could wreck the 1998 Good Friday Agreement, aimed at ending over 30 years of sectarian violence between British loyalist Protestants and Irish republican Catholics. An essential element in the confidence-building of the 1998 pact is the open border between Ulster and the Irish republic to the south under the umbrella of the EU.

The re-imposition of a “hard” border between Northern Ireland and Eire will affect progress in demolishing community barriers. Northern Ireland’s economy will also be far more adversely affected by Brexit than other parts of Britain because of its dependence on EU agricultural subsidies. And there will be domestic political pressure on the Dublin government to interfere in Northern Irish affairs, thus likely inflaming the passions of Protestant Ulster loyalists.

The peace agreement is already tottering, with the collapse on January 16 of the province’s power-sharing executive joining the loyalist Democratic Unionist Party and the republican Sinn Fein. New elections were held on Friday, March 3, but early returns suggest there will be no clear result, and London may have to impose direct rule. That will set back the development of devolved self-government in Northern Ireland. Prolonged direct rule by London could well see the province stripped of the moderate political actors who have begun to mature during the two decades of peace.

Unlike in Scotland, however, there is no clear path by which Northern Ireland could maintain its desired relationship with the EU by, for example, opting to leave the UK and join the Irish Republic.

Sturgeon will set out her argument for a new Scottish independence referendum when she addresses her party’s annual meeting later this month. From what she has said and written already, it is evident Sturgeon will make at least three arguments.

One is that her Scottish National Party was elected to the provincial government in May last year (before the Brexit vote) on the understanding that it “should have the right to hold another referendum if there is a significant and material change in the circumstances that prevailed in 2014, such as Scotland being taken out of the EU against our will.”

It is unarguable that the June Brexit referendum result was just such a material change in circumstance.

Another argument is that Sturgeon claims Prime Minister May has not fulfilled her promise to only start the process of taking Britain out of the EU once a common approach had been agreed with the British regional governments in Scotland, Wales and Northern Ireland.

Also, her party’s voter mandate includes a clear responsibility to keep Scotland within the EU, Sturgeon has said. “There are various ways in which Scotland’s place in the European Single Market could be maintained,” she wrote in a recent discussion paper.

“One option – in my view, the best option – is to become a full member of the EU as an independent country.”

It will be difficult for Theresa May to refuse to give the Scottish Parliament permission to hold another independence referendum. But the British Prime Minister is likely to insist that no referendum be held before the UK has left the EU. May doesn’t want to be campaigning in Scotland while she is battling out the future with Brussels.

The negotiations to take Britain out of the EU after 45 years as a member will take at least two years. That means no new referendum on Scottish independence will be held before 2019, and probably later than that.

The European world may well be a different place by that time. With anti-Brussels parties gaining significant influence throughout the EU, and conceivably taking power in Holland, France and Italy this year, the union could be a very different beast, and perhaps even a dead one, by the time the Scots get to vote again on independence.

Even if a new referendum were held now, it is touch-and-go whether Scots would opt to leave the UK. While 60 per cent of Scots opted to stay in the EU in the Brexit referendum, polls suggest they are not as committed to leaving the United Kingdom in order to stick with Europe. Recent public opinion surveys suggest there has been little change in public attitude since 2014, when 55 per cent of Scots decided to stay in the UK.

The economic arguments for Scotland to remain in the UK are compelling. But as we know from the Brexit vote itself, and tribal nationalist convulsions that are consuming the United States, Holland, France and elsewhere, measured economic judgements are not always voters’ main consideration.

The Scottish economy is in the doldrums, largely because of the slump in value of its North Sea oil reserves. And EU membership is not as great a direct economic benefit to Scotland as it is for North Ireland. As Scottish writer Alex Massie pointed out recently: “Membership of the UK single market is worth four times as much to Scotland as membership in the EU single market. In these circumstances only a fool would endorse independence.”

First Minister Sturgeon counters this argument by warning that Scotland faces tough economic times anyway, that the fall-out from Brexit will be as damaging to Scotland as the necessary austerities of the first years of independence.

“The case for full self-government ultimately transcends the issues of Brexit, of oil, of national wealth and balance sheets and of passing political fads and trends,” Sturgeon said recently.

And in this age of demagogy and resurgent tribal nationalism who is to say she is wrong?

Scotland Decided: what the experts said in 2014

In its independence referendum, Scotland voted to remain in the United Kingdom by 55 versus 45 per cent. An expert panel looks at what happened, and where it leaves the UK and Scotland.

It is becoming clearer just how wrenching a process it will be for Britain to leave the European Union, and beyond doubt that Britain is headed for a “hard” Brexit.

Brexit will save the European project, by Jonathan Manthorpe

In England’s Mean and Truculent Land, by Jonathan Manthorpe