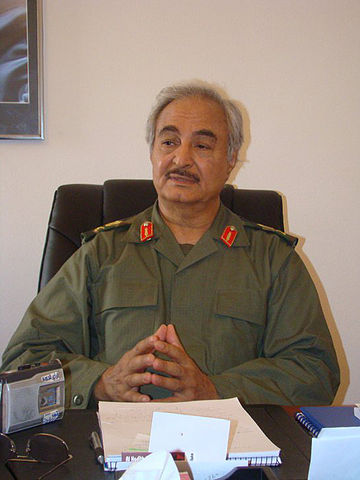 Haftar’s rapid emergence as a potential new dictator comes as a fresh House of Representatives is due to meet in Benghazi on August 4. This is the latest attempt, in a so-far failed series of efforts, to produce a functioning administration after the uprising against Qaddafi and his killing in October, 2011. However, there is little confidence this new parliament will be able to quickly appoint a prime minister and government that can demobilize the clan and tribal militias, restore security, and effectively run the country.

Although the United Nations has a political support mission of 160 people assigned to Libya – they are temporarily in neighbouring Tunisia because of the fighting in Tripoli and Benghazi – the Security Council has been unable to agree on their mandate. But there appears to be no appetite to turn the support mission into a peacekeeping force that could impose security.

In this climate, Haftar could become the new Qaddafi, if his forces can defeat the Islamists. That may not be so easy. The Islamists appear to be gathering reinforcements in preparation for a showdown with Haftar. There have been reports in recent days that the main militant groups, the Libya Shield militias affiliated to Egypt’s Muslim Brotherhood and the al-Qaida-linked Ansar al-Sharia, are recalling their jihadist fighters who were sent to join the uprisings in Syria and Iraq.

Haftar, 71, was a commander in Qaddafi’s army and in 1986 led Libyan forces in the latest of a series of invasions of neighbouring Chad. He was captured by the Chadians in 1987 and defected to the opposition National Salvation Front of Libya. Haftar established himself in the United States in the early 1990s, and settled in Langley, Virginia, site of the headquarters of the CIA. This coincidence has led to allegations that Haftar has and continues to collaborate with the American spy agency.

Haftar returned to Libya in 2011 to join the uprising against Qaddafi and tried to make himself a central figure in the transition after the killing of the dictator. Despite coming from the powerful Ferjan tribe, Haftar had little success in pursuing his political ambitions until this year. In February he issued a video statement to the media, in which he appeared in a general’s uniform and called for the civilian administration to be replaced by a military council to “save the country.”

After the then Prime Minister Ali Zidan called for his arrest, Haftar fled to Benghazi, where he began gathering supporters from among disillusioned military officers and units, the police, and tribal militias. In a recent interview with Egyptian media, Hafta claimed to have 70,000 fighters in what he calls the Libyan National Army. That is undoubtedly an exaggeration. The British-based Jane’s Terrorism and Insurgency Monitor reckons Haftar has about 35,000 troops either directly under his command, or in allied militias.

A major strength of this force is that Hafta is reported to have 12 warplanes from the former Libyan air force. These are said to be four MiG 21 and four MiG 23 fighter jets, and four Mi25 ground attack helicopters.

This air superiority was decisive when Hafta launched his attack on Islamist militia bases in Benghazi on May 16. His main target was the al-Qaida-linked Ansar al-Sharia. This has added to speculation that Hafta has ties to the CIA. Ansar al-Sharia is accused by Washington of launching the September 2012 attack on the U.S. consulate in Benghazi in which the ambassador and three other Americans were killed. Early this year, Washington declared Ansar al-Sharia to be a terrorist organization.

Whether Hafta is the CIA’s man is still unclear. But he certainly is viewed favourably by the Egyptian and Tunisian governments.

While there are many people who see a coup by Hafta and his followers as the best chance of bringing stability and security to Libya, it would not be a long-term solution. It would merely be a step backwards to the Qaddafi era, as has happened in Egypt with the military again taking control after elections produced a Muslim Brotherhood government.

A Hafta coup would do nothing to resolve the political, tribal and religious divisions that have become deeply embedded in Libyan life. But it is the most likely prospect for Libya’s immediate future.