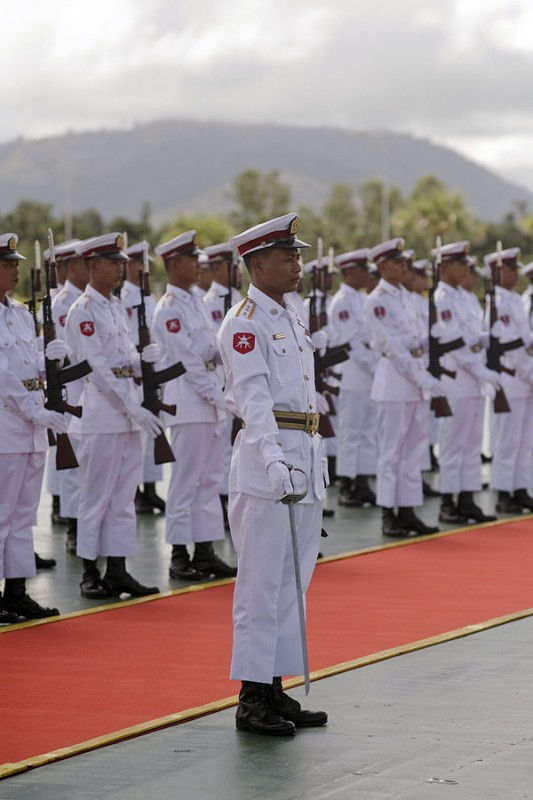 But Burma’s generals are proving to be altogether more addicted to their cans of Brasso than supporters of democracy for the Southeast Asian nation, also known as Myanmar, hoped or expected. With parliamentary and presidential elections due in November, Burma’s transition to some form of genuinely representative and accountable political system appears to be stalled.

The generals maintain the right to nominate a quarter of the members of the 440-seat parliament. This gives them a commanding influence over major policies and legislation. More importantly, it gives the generals a veto over any changes to the constitution, which require the backing of 75 per cent of members of parliament, plus one. A key amendment to the constitution that would advance the cause of democracy, of course, would be removing the military bloc in parliament.

Burma has recently had an altogether too vivid demonstration that while the ruling officers may now be wearing civvies, the leopard has not changed his spots. A flare-up in half a century of wars with ethnic minorities in the border regions led to the over-enthusiastic Burmese military straying into China and killing five farmers.

Meanwhile, the advent of freedom of political expression and the right to demonstrate, that was meant to come with the end of military rule, is proving more theoretical than real. Police, under the control of the Department of Home Affairs, which is one of those ministries reserved for military administration and run by Lieut-Gen U Ko Ko, last month attacked peaceful demonstrations by students in Rangoon and Letpadaung, beating and arresting protesters. The attacks by the police have sparked particularly sharp commentary and debate in Burma because they came only a few months after parliament passed amendments to the Right to peaceful Assembly and Peaceful Procession Law. The amendments were meant to ease restrictions, but international commentators have pointed out the law still gives the military and the police arbitrary and unwarranted power to crackdown on demonstrations. That is exactly what happened, and there is widening concern that Burma is slipping back into de facto military rule.

And another hangover from the five decades of military rule is that the army and senior officers control large segments of the economy. Foreign investors are being cautious about taking advantage of the lifting of sanctions and plunging their money into Burma’s abundant natural resources and plentiful low-cost labour market. But those that do take the plunge find that involving a general or someone close to him in the enterprise is a sensible business model.

So Burma has thus gone from military dictatorship to kleptocracy without drawing breath.

Doubts about whether Burma can get through the road blocks and continue the transition are such that Aung San Suu Kyi is even threatening that she and her National League for Democracy (NLD) will boycott the elections unless there is some real constitutional reform before voting day.

Suu Kyi, 69, of course, is embroiled in her own difficult personal transition from Princess in the Tower to political knife-fighter. To the outside world she remains the embodiment of all that is saintly in human political life. And the NLD is undoubtedly the most popular party among the majority of the 53 million Burmese. In the last fair election in Burma in 1990 the NLD won 85 per cent of the vote. The generals were so outraged they refused to acknowledge the result and embarked on another 20 years of military rule. Also, by-elections in 2012, when Suu Kyi and 43 other NLD members easily won parliamentary by elections, show that popularity continues. But among stalwart pro-democracy activists in Burma, many of whom worked as hard against and suffered as much if not more under military rule, but who have no name recognition outside the country, there are growing questions about Suu Kyi’s political acumen.

There is pointed criticism of her decision to run in the 2012 by-elections and to become, with fellow NLDers, a Member of Parliament. This decision to run was based on the apparent openness to reform by President Thein Sein, a former army general and central member of the junta. It was Suu Kyi’s entry into parliament that gave legitimacy to the “civilian” regime created by the military and persuaded the European Union and others such as the United States and Canada to loosen sanctions.

Given the lack of progress since then, some now think Suu Kyi was hoodwinked by the generals and that she can expect little or nothing in return from the generals in the shape of continued reform.

Suu Kyi disputes this analysis and insists she thinks it was right for her and her fellow NLD members to fight and win the 2012 by elections. She says it was important because it has allowed the previously banned NLD to operate as a political party. Also, even though the 44 NLD members form only a small opposition group in the 440-seat House of Representatives, they have, she says, been “quite effective” in forcing constitutional change onto the political agenda.

That effectiveness was on display at the end of last week when President Thein Sein met with five other leading political figures to discuss political reform. This small-group discussion was something of a victory for Suu Kyi. In the past the generals, both in and out of uniform, have preferred mass discussions on constitutional matters because its easier to control the agenda and more difficult for the assembled throngs to dictate any clear vision for reform.

Suu Kyi’s preference was a constitutional committee of four people, but compromised on six. The members were herself, the President, the speakers of the two houses of parliament, and the chairman of the Arakan National Party, which represented Burma’s 135 ethnic minorities, grouped into eight distinct ethnic groups recognized by the government. As can easily be guessed, the sixth person at Friday’s talks was the Burma Army Commander-in-Chief, Min Aung Hliang.

It appears that the six did discuss the prospects of constitutional change before November’s elections, but came to no conclusions or even a clear idea of the way forward. This was, no doubt, the preferred outcome for President Thein Sein and the military. The group is due to meet again after the Buddhist New Year on April 21.

A central issue is Suu Kyi’s own political fate. During Suu Kyi’s 15 years of on-again-off-again detention and house arrest, the junta attempted to kill her political currency by pointing to a law saying that no-one married to a foreigner could hold public office. Suu Kyi was married to British professor and expert on Himalayan cultures, Michael Aris, who died in 1999. The new constitution put in place by the military as part of its construction of a pseudo civilian administration includes clause 59f, which says no-one with foreign family members can become President of Burma. Although Dr. Aris is dead, Suu Kyi has two “foreign family members,” her sons who are British subjects.

Offending clause 59f is something Suu Kyi and the NLD would like scrapped before the elections. But it is a good bet that the generals will only permit the woman they used to deride as “the lady” to do a Mandela and stride from prison to the presidency if the office is gutted of any real authority. It is well within the generals’ ability to make the presidency into a purely ceremonial position before November and allow Suu Kyi to ascend to an empty office. But these are careful men. They have not preserved their power and wealth by taking unnecessary risks. They will make sure every door to real authority is locked, bolted and nailed shut before they allow Suu Kyi to take the keys to any senior office.