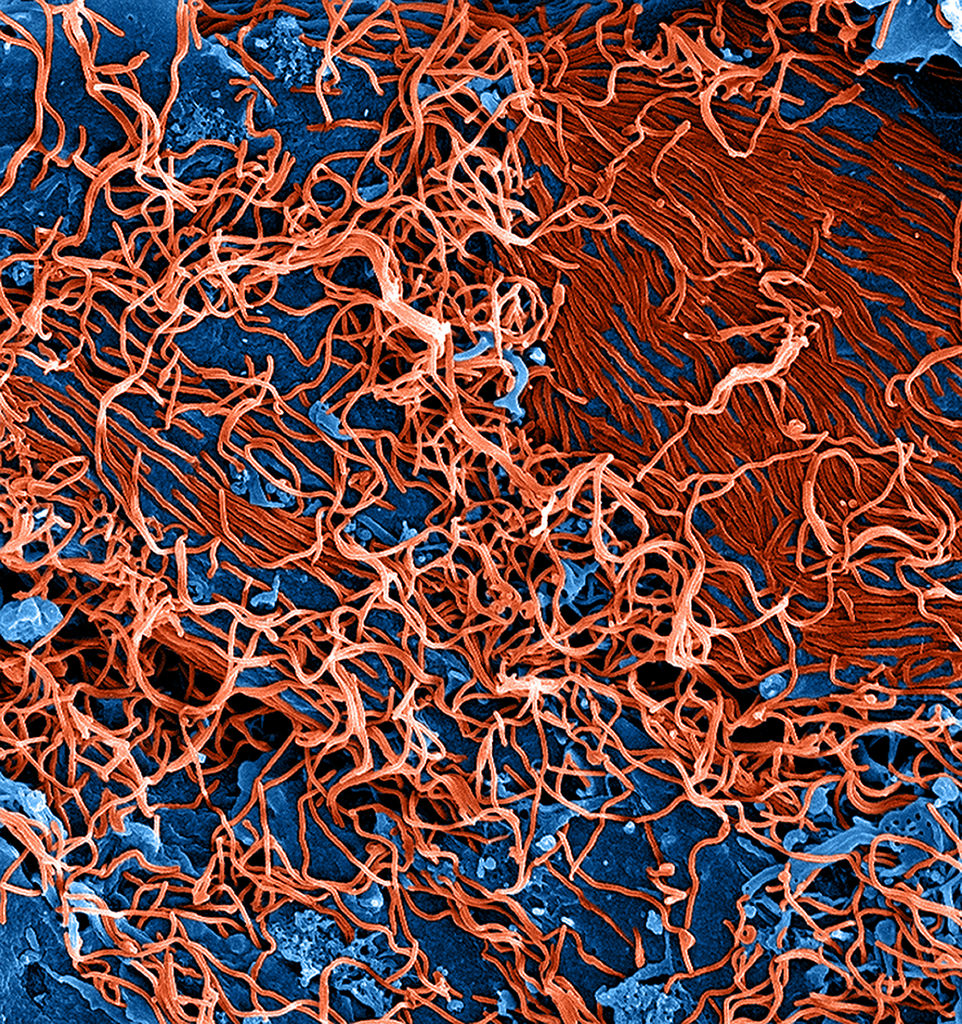 Ebola has tweaked our primal fears of the first Horseman of the Apocalypse, Pestilence  — and perspective is needed, writes Jonathan Manthorpe. Pictured above are filamentous Ebola virus particles, coloured red, budding from a blue-coloured infected VERO E6 cell. Image captured via a scanning electron micrograph at 25,000x magnification. Image by the United States National Institutes of Health, Public Domain

The email message that arrived in my office in Hong Kong throbbed with the near hysteria of the editor who wrote it.

“Jonathan,” it said, “there’s an outbreak of the Black Death in India. Please get there ASAP and file.”

I took another swig of morning coffee and composed a calming reply. “I’ve heard about the outbreak in Gujarat state,” I said. “It’s called Bubonic Plague and it’s endemic in India. Happens all the time, but I’ll happily go. It will be a good opportunity to do other stories.”

It was September, 1994, and this outbreak of the plague had touched some primal, tribal human memory. Flowery, overblown language is the lifeblood of Indian newspapers, and by the time these enhanced reports of the return of the Black Death had reached the London tabloids one could be forgiven for thinking the End of the World was at hand.

My editor, unfortunately, was a London tabloids junky, so there was no alternative but to bow to the inevitable and get on the plane for India. I dutifully filed stories on the outbreak, which quickly died down and soon ran its course. My final story was a round-up of the event in which just over 50 people died, most in Gujarat, but a few in five neighbouring states. I could not resist pointing out in this final story that during the same three weeks that the outbreak of the plague had lasted, over 40,000 people had died in India of tuberculosis. This is a highly infectious disease, often fatal among the poor. TB transmission often thrived on cramped and inadequate living condition, and is associated with immune systems debilitated by HIV infections.

I always find it amazing and bleakly amusing that for an animal whose survival depends to a significant extent on avoiding perils, we are often appalling bad at risk assessment. In recent weeks Ebola has tweaked our primal fears of the first Horseman of the Apocalypse, Pestilence, in the same way as my run in with the Black Death. Politicians, world health officials and the media are near hysteria as they pump out fear-inducing prophecies about the looming pestilential scourge.

Well, sound public health policies and practices are a good idea at all times. But it is also important to keep a sense of proportion: to assess the real risks and not get driven into a state of emotional exhaustion by fear of a danger that may be quite small.

As is to be expected of any human endeavour, the record of public health warnings about and responses to outbreaks of communicable diseases – now able to leap vast distances through the medium of air travel – is spotty.

Here in Canada in early 2003 there was an outbreak of severe acute respiratory syndrome, SARS, which arrived by plane from China’s southern Guangdong. It had been contracted by humans from infected civet cats being prepared for the pot. The SARS outbreak claimed 44 lives in Canada, nearly half of them healthcare workers, and 916 people globally. The incident was an important test of public health responses to infections spread by air travel both in Canada and elsewhere. There were some mistakes, whose remedies are now part of the strategy should Ebola make the leap out from isolation wards to the general public. But, by and large, the system worked well.

Politicians and public health officials do themselves no favours, however, when they exaggerate the risks of epidemics or pandemics. This Chicken Little Syndrome was displayed in full flight following an outbreak in Asia in the late 1990s of — appropriately enough — “chicken flu,” the H5N1 strain of avian influenza. The disease is an affliction of poultry, but people started catching it from their domesticated chickens, which in Asia often live in close proximity to people. The infection started spreading through Asia in the early 2000s, and reached Europe and North America by 2004.

The survival rate among people who caught chicken flu was low, only about 40 per cent, and scores of people died from the disease. But from the start, some international public health officials spread far more fear around the outbreak than was justifiable. They warned that while all known infections had been from chickens to humans, if the H5N1 virus mutated so that there was human-to-human infection, a global pandemic was in the offing. Well, for months there were grossly alarmist reports about H5N1 making the leap and that human-to-human transmission of chicken flu had started. Those reports were all wrong. There has not been a single case of human-to-human transmission of the virus. The only reason the sickness moved around Asia and into the wider world, apparently, is because there is a major business in the illegal and underground smuggling of poultry.

The Ebola virus was identified 40 years ago and there have been several outbreaks of infections in Africa. The latest outbreak started in Guinea in December last year. According to the World Health Organization, it has killed about 4,500 people, mostly in the West African nations of Guinea, Sierra Leone and Liberia. The death rate among those who contract the virus is about 70 per cent and the WHO is warning that within two months there may be up to 10,000 new cases a week.

But since the start of the Ebola outbreak, about 600,000 people in Africa have died of tuberculosis and 300,000 from malaria. Even in the three countries where the Ebola outbreak is most serious – Liberia, Sierra Leone and Guinea – malaria and TB are still by far the most prevalent killer and will be, even if the WHO’s dire predictions come true.