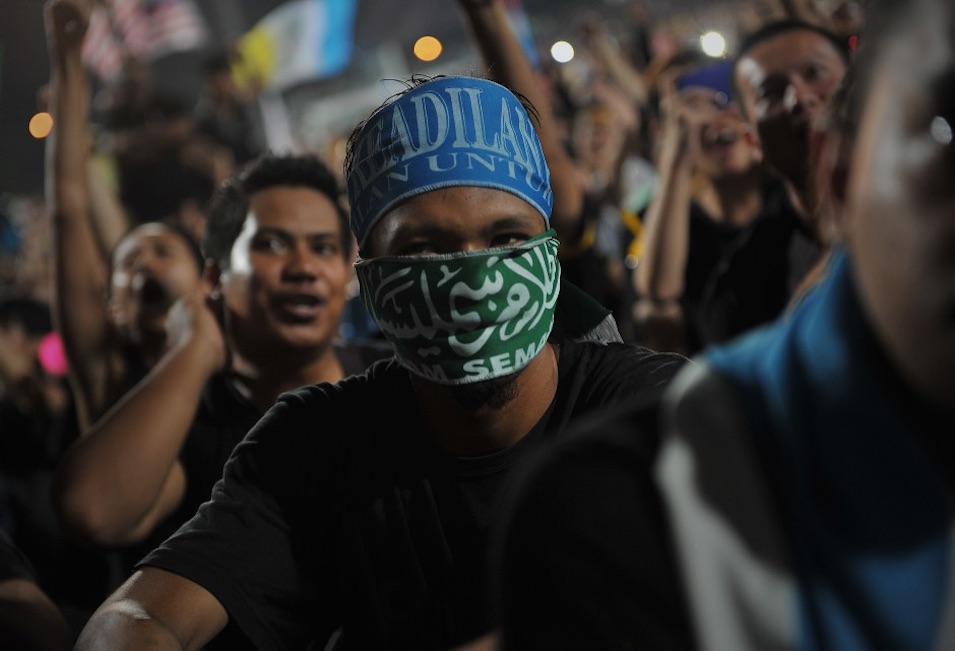 The gathering in Kuala Lumpur on May 8, 2013, of thousands of opponents to the United Malays National Organzation and their denunciation of a national election results demonstrates the potential of the Ibraham sentencing to generate change in Malaysia. FIRDAUS LATIF/Via Wikipedia Commons

In the end, what happens to Strauss-Khan is neither here nor there: a matter of no significant public importance. But the public reaction to the imprisoning of Anwar is another question. For despite the persistent efforts, over more than 15 years, of leading figures within Malaysia’s ruling United Malays National Organzation (UMNO) to smear Anwar’s reputation and kill his political career, his opposition coalition remains a potent and growing force.

But this time the ruling Machiavellis may have succeeded in removing from the political stage the man who represents the greatest threat to the Barisan Nasional coalition, which has been in power since independence from British rule in 1957. Anwar, 67, has no further right of appeal from the verdict or sentence, and the conviction includes a ban on any political activity for five years after his release.

Yet Malaysia’s opposition has survived and thrived before without Anwar at the helm and will probably do so now. The Barisan Nasional may well find that in persecuting Anwar it has created a martyr who will be as dangerous in prison as on the hustings.

The nervousness of the authorities over public reaction is clearly evident as this week they stomp vigorously on any signs of support for Anwar. They even used the country’s draconian 1948 Sedition Act, a relic of Malaysia’s British colonial past, to detain a popular cartoonist, Zunar, who tweeted support for Anwar and criticism of the entire judicial process.

The authorities have reason to worry about the mood of the voters. Support for the Barisan Nasional coalition, led by the ethnic Malay United Malay National Organization (UMNO), has been falling fast in recent elections. The government of Prime Minister Najib Razak has been plagued by allegations of corruption and incompetence. And lurking in the background is the still unexplained murder by his bodyguards in 2006 of a Mongolian model and translator who is alleged to have been Najib’s mistress.

Efforts to soil Anwar’s image in the Muslim-majority country where sodomy is illegal have been singularly ineffective. Anwar’s three-party Pakatan Rakyat (People’s Pact) coalition, led by his Parti Keadilan Rakyat (People’s Justice Party) has made persistent gains in both national and state elections. In 2013 national elections, widely considered to have been tainted by fraud, the Barisan Nasional managed to win only 133 of the 222 seats in parliament, the first time it has failed to get a two-thirds majority since 1957. Anwar’s Pakatan Rakyat won 89 seats, up from 82 in the previous election. The opposition coalition also won control of five of Malaysia’s 13 state assemblies – provincial governments in Canadian terms.

Yet if Anwar had played his cards differently he could by now be heading into a comfortable retirement – instead of a prison cell – after several years as the Barisan Nasional prime minister. That was the agenda and game-plan when, in 1997, economics intervened.

Anwar began his political career in the 1970s as leader in Malaysia’s Islamic youth movement. To the surprise of many, he joined UMNO in 1982 and rapidly rose up the ruling party’s hierarchy. He became the favourite of the then prime minister, Mahathir Mohamad, who in retirement is still a malevolent force in Malaysian politics. In 1991, Anwar was appointed Finance Minister, a role in which he excelled and was admired by his international counterparts, including Canada’s Paul Martin, who counted him a friend.

In 1993 Anwar was appointed Mahathir’s deputy and political heir-apparent. Anwar’s future seemed firmly charted, but then the whole plan fell apart on July 2, 1997. That’s when the grossly over-inflated Thai economy burst, setting off a currency and debt crisis among all the over-extended economies of Asia, including Malaysia.

There were already some tensions between Mahathir and Anwar, who had been publicly critical of corruption and nepotism within UMNO. But the 1997 Asian Financial Crisis caused a headlong clash between the differing visions of the two men. Anwar was in favour of the International Monetary Fund’s remedy for the crash, including austerity measures and dramatic cuts in government spending. Mahathir, in contrast, blamed currency speculators like George Soros for the crisis. He advocated, essentially, pulling up the drawbridge on the Malaysian economy, imposing currency controls and tightening regulations on foreign investment.

The following year, 1998, the first signs of a political campaign to oust Anwar appeared with the publication of a scurrilous book entitled “50 Reasons Why Anwar Cannot Become Prime Minister.” The book, written by the former editor of a government-controlled newspaper, contained allegations of homosexuality, written in purple prose, and charges of corruption. Then one branch of the police charged the author with the “malicious publication of false news,” but other police units received instructions from political masters to investigate the claims.

Early in September, 1998, Mahathir sacked Anwar from the government. Anwar and his supporters responded by forming the Reformasi (Reform) movement, and he began touring the country making firebrand speeches to large crowds about corruption in the Barisan Nasional government. But on September 20, Anwar was arrested and charged with corruption and, early the following year, with sodomy.

The trial, in early 1999, was an extraordinary piece of stage-managed judicial theatre. The main charge of corruption, stemming from allegations that Anwar used his political position to try to interfere with the police investigation into the sodomy charges, swiftly brought a conviction and a six-year prison sentence, to be followed by a ban on political activity for five years. But the sodomy charges were quietly dropped after it was found that even a court most eager to please its political masters could not convict Anwar on the paucity of evidence at hand. But in June, 1999, after mass demonstrations in support of Anwar, he was charged with sodomizing the family driver many years before. This trial, to put it mildly, did not meet international standards. On two occasions the High Court judge allowed the prosecution to amend the charges to fit the testimony given by witnesses. And two male associates of Anwar came forward to say they had been tortured by police into agreeing to give evidence of homosexual relations with Anwar. They said their “confessions” were completely untrue, but the High Court judge decided to believe the police that the confessions had been voluntary, and in mid-2000 convicted Anwar and sentenced him to nine years in prison, to be served after the six-year sentence for corruption.

There were several other irregularities during this trial, including the arrest of Anwar’s defence lawyer for sedition, and evidence that Anwar was being poisoned in prison.

Anwar’s fortunes appeared to change with the retirement of Prime Minister Mahathir in 2003. His successor, Abdullah Badawi, allowed judicial appeals to go forward and in 2004 the sodomy verdict was overturned. Anwar’s sentence for corruption had already been served, and he was released from prison. But his efforts to get the corruption conviction overturned were unsuccessful, and he faced being barred from involvement in Malaysian politics until April 14, 2008.

Anwar’s international stature was unaffected by the judicial campaign against him. He filled in the time before he could return to Malaysian politics as a visiting fellow at St. Anthony’s College, Oxford, senior associate member at Johns Hopkins University, and as visiting professor at Georgetown University.

While Anwar was in limbo, his wife Wan Azizah led the political charge, overseeing the evolution of the Reformosi movement into the Parti Keadilan Nasional and its alliance with the religious Parti Islam Se-Malaysia, and the ethnic Chinese Democratic Action Party.

To forestall Anwar’s return to politics, then Prime Minister Badawi called the 2008 elections for March, a month before Anwar’s exclusion expired. Wan Azizah briefly became the first woman to lead a political party in Malaysia’s parliament. But she resigned and Anwar, on April 29, returned to parliament after winning the resulting by-election.

In truth, Anwar’s management of the opposition was meteoric and unrealistic. Although the ruling Barisan Nasional had done badly in the 2008 election, Anwar clearly thought the government was more vulnerable than was in fact the case. He kept predicting that there would soon be 30 defections from the government benches, which would allow him to form a government. It didn’t happen. Instead, UMNO eased Badawi out the door and brought in Najib and a new broom.

Meanwhile, sodomy charges were again levelled at Anwar. On June 29, 2008, an online news portal said an aide of Anwar’s, Saiful Bukhari Azian, had made a report to the police claiming he had been sodomized by his employer. But the judge in the High Court case heard early in 2012 found the evidence “unreliable,” and dismissed the charges. The prosecution appealed, and March last year the acquittal was overturned. This week, the Federal Court, Anwar’s last recourse, upheld the Appeal Court’s overturning of the acquittal and affirmed his five-year prison sentence.

Not surprisingly given all he has gone through in the last 17 years, Anwar is showing signs of eccentricity and paranoia. It may well be that his time as Malaysia’s prime minister-in-waiting is over. But there is no doubt the movement he has inspired will continue and, at some point, there will be change.