Part three of a three-part series on the War of 1812, in The Yankee Road, an ongoing project by Jim McNiven.

In January, 1813, the locally-raised British 104th Regiment of Foot was ordered to proceed from Fredericton, New Brunswick to Kingston, Upper Canada. Its task was to help defend the town and the shipyard from an anticipated American attack once the ice had left Lake Ontario. Until then, the ‘road’ from the major naval base at Halifax to Quebec City had been little more than a track, used by military messengers, and the road beyond, up the St. Lawrence River, was not a lot better. Now, in the depths of winter, on February 16, a good part of the regiment, 600 soldiers, was expected to make an almost 800-mile march north to the St. Lawrence and then southwestwards and upriver to Kingston.

The soldiers had to brave weather that was sometimes -30 C, and take short shifts breaking a path through the snow so that their comrades could pass through. They sometimes came to small villages where they could access horse-drawn sleighs for a few miles, and then it was back to breaking a path through the snow. Through careful management, there were few casualties from the cold, and no fatalities. The 104th made Kingston in April, proving that forces could be moved overland when the ice on the River and Gulf of St. Lawrence prevented sea traffic. The 104th went on to fight on the Niagara peninsula, through the summer of 1814. 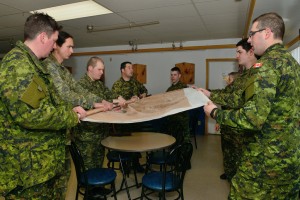 The trek of the 104th symbolized the idea that the widespread and under-populated British colonies in the northern half of North America might share a common destiny, not unlike the westward expansion of the United States. This was not to come to fruition until the combination of the potential of a northern railroad and the pressure from the American Civil War brought about Confederation in 1867, but it was actions like that of the 104th that began people thinking in wider terms than some kind of a Maritime colonial destiny separate from that of a central Canadian one.

The aftermath of the War of 1812 on Upper and Lower Canada led to recriminations between the British colonists and the descendants of the American Loyalist settlers, plus the primarily Yankee settlers who had moved across the Niagara River for free land and light taxation after the Revolution. American politicians and soldiers in 1812 had predicted that these people, who constituted the majority of settlers in Upper Canada, as well as the French Quebecois in Lower Canada, would support affiliation with the American cause, easing the conquest of these British colonies.

This did not happen, primarily because of the undisciplined nature of the American militia who brought theft and fire along with pleas for unity. Stealing household goods and burning farms alienated these settlers, who were not inclined to side with either government at first. The same thing occurred when American privateers in the Revolutionary War had attacked Yankee settlements in Nova Scotia, turning their inhabitants into supporters of the Crown. A few men joined the American forces in 1812, but more tended to join the British Upper Canada militia. In the end, though, most of the serious warfare was conducted on both sides by army regulars.

After the War of 1812 was over the British settlers, who had the better contacts in London, pushed for tighter control over American settlers. Immigration from across the Niagara River was discouraged, while that from Scotland, Wales and England was encouraged. My great-great grandfather emigrated from Scotland to Upper Canada in this period, and his family settled in the Grand River valley northwest of Toronto.

The aftermath of the U.S. Civil War led to attempts to ‘confederate’ the colonies on the Atlantic coast with those on the Lakes and the St. Lawrence. Canada was born out of four colonies, Ontario (Upper Canada), Quebec (Lower Canada), Nova Scotia and New Brunswick in 1867. Gradually, and with British pressure, other ‘provinces’ joined or were created, until, in 1949, Newfoundland and Labrador joined Confederation.

It is an interesting speculation whether Upper Canada, at least, eventually might have joined America as a State in the middle 1800s, had the War of 1812 not taken place. Most likely continuing emigration across the Niagara border, especially as part of the Yankee rush to Michigan in the mid-1830s, made the chances of this happening, I would venture, to be greater than even. The construction of a railroad bridge across the Niagara gorge in the mid-1850s, which helped tie southern and western Ontario trade to Michigan and New York simply adds to this supposition. Were this to have occurred at the time, then it is hard to see a non-American future for the other British parts of the continent.

A Loser and Two Winners

Actually, both sides ‘won’ the war of 1812. Only the Indians lost. With the loss of the Battle of Lake Erie, the possibility, envisioned by General Isaac Brock, that an Indian buffer state might be created between the United States and Upper Canada disappeared. Then, when Tecumseh was killed at Moraviantown, the only leader that might have made it a reality was lost. The tribes sank into passivity and American settlement in Indiana and Michigan moved forward. Many of these native people moved into Canada, away from American treatment. The southern Indians, put down by Jackson, soon found themselves pushed west along the Trail of Tears or shoved southwards through Florida into the Everglades. With the exception of a decade of Sioux resistance after the Civil War, none of the so-called ‘Indian wars’ after 1815 amounted to much. It was over.

Some of my Ojibway ancestors came north into Canada as a result of the War of 1812. Eventually, they were given the uninhabited, and considered ‘holy’, Manitoulin Island in Lake Huron as a reserve (‘reservation’, in Americanese). They moved there around the 1820s. In 1870, the Ontario government took back back half the Island and opened it up to settlement. My Scottish great-grandfather McNiven moved there in 1870 and partnered in a sawmill whose products largely went across the Lake to Alpena MI and then on to Chicago and the Midwest. He had a child with an Ojibway woman, that child being my grandfather.

One of the winners of the War was Canada, which gained an identity, if only a defensive one, and one that characterizes the country to this day. There is a kind of moral superiority feeling in Canada toward the Yankees who threatened the place, even if the actual, biological Yankees both opposed the war and happily made fortunes out of selling their products to both sides. It doesn’t matter as, like the rest of the world, Canadians use the term ‘Yankee’ to mean all Americans.

The other winner was the United States. Politically, not losing the War destroyed the Federalist party as a political force, whose members sat out the conflict or actively supported secession and whose businessmen had profited from it. It established the American right to the enormous land mass Jefferson bought across the Mississippi River. As well, it eliminated the Indian threat of a buffer state to settlement in the Northwest Territory. Not losing the Great Lakes country, with its enormous iron and timber resources, led to the rise of the commercial and manufacturing powerhouse of Chicago and Illinois in general, a major factor in raising both Lincoln and Grant to greatness 50 years later.

Part 1: The Incompetent vs The Distracted

Warfare between Great Britain and America came to its legal end 200 years ago, with the ratification of the The Treaty of Ghent on February 16, 1815. Public and official interest in the bicentennial of the War of 1812 in Canada, the United Kingdom and the United States, has been mostly muted, despite an official effort to play up the War in Canada. Yet big things came out of this standoff. One was the eventual creation of Canada as a country separate from America. The second was the destiny of the Yankee exodus westward and the outcome of the Civil War.

America did not need control over the lower Great Lakes to access their communities to the extent that the British did, except for two spots. The first was the Niagara area, where inconclusive battles were fought mostly on the British side. The second was the western end of Lake Erie and its feeder, the Detroit River. British control over Lake Erie meant that American troops and supplies could not be brought far enough north on land from Indiana to allow them to support Detroit and control the Upper Lakes. As well, the British Fort Malden at Amherstburg controlled the shipping channel in the Detroit River.