The Yankee Origins of Baseball

My wife and I have visited Cooperstown, New York, at least four times, primarily to view America’s Baseball Hall of Fame. The “downtown” of today’s village of two thousand people is a standard tourist trap: an attraction surrounded by a large number of related souvenir shops and restaurants. In the 1930s, the baseball establishment accepted Cooperstown as the place where Abner Doubleday supposedly devised the rules of the game in 1839. The attribution of Doubleday as baseball’s inventor was made on very improbable evidence, however. The Abner Doubleday — and there could have been more than one living in upstate New York at the time — was a noted Civil War general, but in 1839 had been a cadet at West Point and unable to leave its grounds. 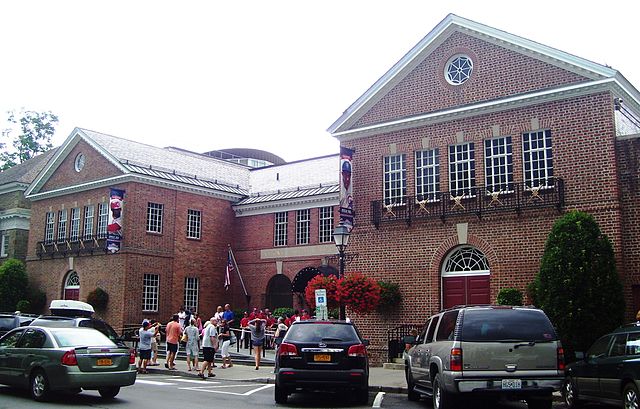 National Baseball Hall of Fame and Museum, in 2012. Photo by Beyond My Ken via Wikipedia, Creative Commons

The National Baseball Hall of Fame and Museum was a child of circumstance. The 1939 decision to locate it in Cooperstown rested on a letter sent more than thirty years earlier to a committee investigating the history of the game. Reacting to baseball critic Henry Chadwick’s 1903 claim that baseball was descended from the British game of cricket, A.G. Spalding, who had developed a prosperous baseball-related business, was determined to Americanize the origins of the game. As Zev Chafets puts it, “[w]hat Spalding needed was an alternative creation myth, one backed up by evidence.” Spalding accordingly asked Abraham G. Mills, a former president of the National League and a political ally, to lead a hand-picked group of five other prominent former players and sports administrators to investigate the origins of baseball. Spalding produced a letter from a supposed old friend of Doubleday’s, a retired mining engineer who claimed to have been there when Doubleday gave the boys of Cooperstown a set of rules that prefigured the eventual game as it was played. Yet Doubleday, who was deceased by the time of the Mills Commission, had made no mention of baseball in his writings. Moreover, his “friend” had been just five years old in 1839. The friend’s claim, however, was enough to give Cooperstown its mythic importance, and at the end of 1907, the Mills Commission reported that it was satisfied that Doubleday had created the modern game in Cooperstown in 1839.

Much evidence of the game’s standardization in fact points to the son of a relocated Nantucket Yankee sea captain, Alexander Cartwright, and a Yankee medical doctor, Daniel L. Adams. In 1845, two years after he and other young Manhattanites had come together to form the New York (City) Knickerbockers ball club, Cartwright devised a constitution for the club and set down the rules for how his club should play the game. These rules then spread across the country until, by 1860, they constituted the standard for play. Cartwright eventually was inducted into the Hall of Fame. More recent research also points to Daniel Adams, the president of the Knickerbocker club, as having had a significant role in the development of the rules and standardization of the game, since Cartwright left for California during the 1849 gold rush. The controversy that began in 1906 over Doubleday and Cooperstown seemed to have been put to rest in 1953, when the US Congress, no less, resolved that Cartwright was the first to put down the rules.

In 1857, the teams that adopted the Knickerbocker rules organized the National Association of Base Ball Players. At first, most of its members were from the New York area, but gradually it expanded to cover most of the area north of the Ohio River and east of the Mississippi. By 1869, the Association, originally devoted to promoting amateur sport, gave in and allowed professional play. The Cincinnati Red Stockings began a string of consecutive victories that gained baseball a large following, and in 1870 the first professional league, the National Association, was formed.

Commercialism, indeed, was already a part of the scene. In 1862, Brooklynite William Commeyer built an enclosed field for baseball games and a clubhouse, graded the diamond, and charged admission. With the Civil War raging, he had “The Star Spangled Banner” played before every game, though it would not become the official national anthem until sixty-nine years after baseball had adopted it. Sporting events, including baseball, still acknowledge Commeyer’s patriotic gesture.

By the time of the Great Depression, and as concerns about mass immigration faded, Spalding’s venture to Americanize baseball had been largely ignored for almost three decades. The federal government then was prevailed upon to develop a ball field on the site where Doubleday was supposed to have invented the game. The Works Progress Administration (WPA), an agency of Franklin Roosevelt’s New Deal, put a number of unemployed locals to work constructing what became known as “Doubleday Field,” and in 1935, Baseball Commissioner Kennesaw Mountain Landis laid out a program for a Hall of Fame and museum next to Doubleday Field, along with a process for naming players, coaches, and others to the Hall. In 1937, the Clark family offered to build a permanent Hall and museum for the sport. This would prove to be of commercial help to the village and surrounding area, through not only its construction, but also the continuing benefits of a tourist attraction.

The relationship of the site of the Hall of Fame to baseball’s origins might be mythical, but its location in a small town, rather than at, say, the Knickerbockers’ old playing field across the Hudson River in urban New Jersey, somehow evokes a sense of appropriateness. Baseball should have been invented in a small town only a generation or so past its frontier days, with the accompanying nostalgia of long summer days in a pastoral atmosphere. Let’s give the final comment to Frenchman Bernard Henri-Levy, who visited America and the Baseball Hall of Fame 150 years and more after Alexis de Tocqueville passed nearby:

This is not a museum; it’s a church. These are not rooms; they’re chapels. The visitors themselves aren’t really visitors but devotees, meditative and fervent. I hear one of them asking, in a low voice, if it’s true that the greatest champions are buried here — beneath our feet, as if we were at Westminster Abbey or in the Imperial Crypt beneath the Kapuziner Church in Vienna. And every effort is made to sanctify Cooperstown itself, this cradle of the national religion, this new Nazareth, this simple little town that nothing prepared for its election and yet which was present at the birth of the thing….The only problem is that [its] history is a myth, and every year millions of men and women come, like me, to visit a town devoted entirely to the celebration of a myth.

Today, none of this really matters to the stream of pilgrims coming to baseball’s historic Hall of Fame. For them, the rules are eternal and the myth is real.