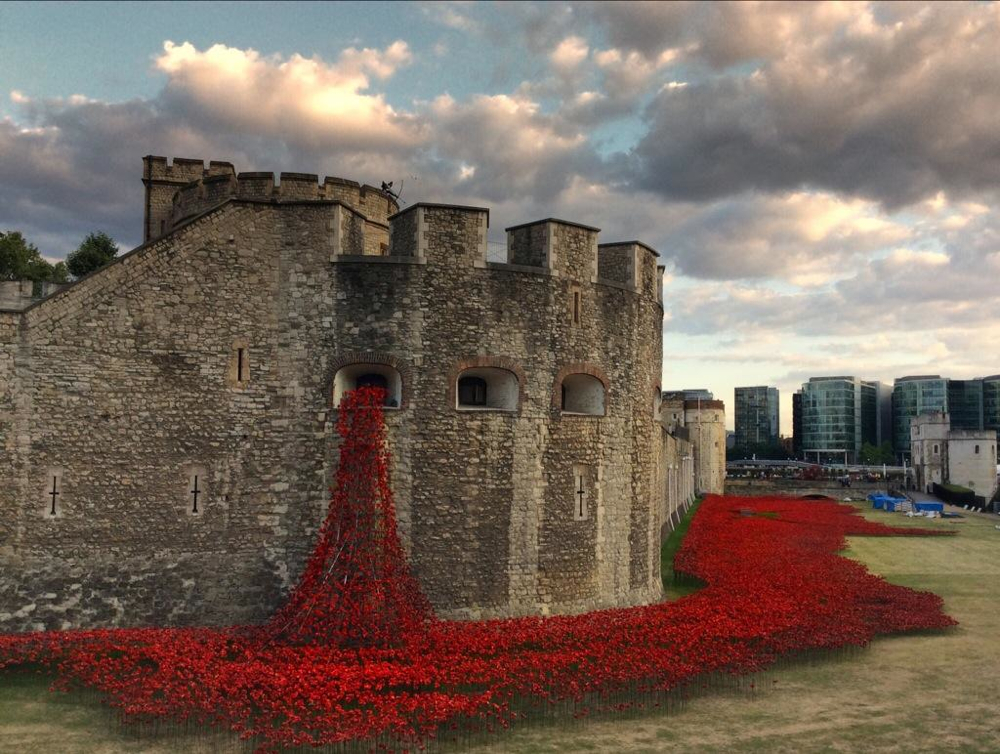 LONDON — Poppies spill out of the Tower of London in the installation Blood Swept Lands and Seas of Red, officially opening August 5. The project, by British ceramic artist Paul Cummins and stage designer Tom Piper, will fill the tower’s dry moat with 888,246 ceramic poppies, each representing a British or Colonial military fatality during WWI. The last poppy will symbolically be planted 11 November 2014. (Photo handout)

Every person who fought in World War I is now dead – and yet no one alive today is unaffected. The war consumed much of the globe for, arguably, decades. Many contend that the unresolved conflicts of the “Great War” re-ignited to become the conflagration we call World War II, then set in motion events from the Cold War to today’s Middle Eastern conflicts.

A century after it began, I am most astonished at the hubris. “Although there are many myths about the Great War, in August 1914 the soldiers did indeed tell their families that they would be home for Christmas,” wrote Margaret MacMillan in her epic tome about WWI, The War that Ended Peace. Many have described the  exhilaration, and a sense of release from years of political tension, of what Theodore Roosevelt called the “great black tornado” that smote Europe on August 4, 1914.

This month, for the centenary, we are asked to bear witness to the carnage.

It would be so much more comfortable to simply avoid, for to confront such horror is to risk despair. Wrote MacMillan in her epilogue, “The Great War marked a break in Europe’s history. Before 1914, Europe for all its problems had hope that the world was becoming a better place and that human civilization was advancing. After 1918 that faith was no longer possible for Europeans. As they looked back at their lost world before the war, they could feel only a sense of loss and waste.”

I am willing to risk despair because I am interested in the future. I am driven by questions: What have we learned? What next conflagration looms? And, most of all, What can we do?

We might start by asking, as MacMillan asked, who to blame. Here is her response:

There are so many questions and as many answers again. Perhaps the most we can hope for is to understand as best we can those individuals, who had to make the choices between war and peace, and their strengths and weaknesses, their loves, hatreds and biases. To do that we must also understand their world, with its assumptions. We must remember, as the decision makers did, what had happened before that last crisis of 1914 and what they had learned from the Moroccan crisis, the Bosnian one, or the events of the First Balkan Wars. Europe’s very success in surviving those earlier crises paradoxically led to a dangerous complacency in the summer of 1914 that, yet again, solutions would be found at the last moment and the peace would be maintained. And if we want to point fingers from the twenty-first century we can accuse those who took Europe into war of two things. First, a failure of imagination in not seeing how destructive such a conflict would be and second, their lack of courage to stand up to those who said there was no choice left but to go to war. There are always choices.

I am less interested in rehashing intricate details of who said what, where, 100 years ago than I am interested in asking what, today, are we failing to imagine? To whom are we today failing to stand up against? What choices are we missing?

Answers to such questions, I believe, are found only in memory, analysis and judgement. But those can be especially hard when too many warriors, and too many of us who came after, refuse to acknowledge the hell that happened. Whole families were and remain gripped in a vise of horrified silence around what we lightly call the “Great War.” Survivors refused to talk about it, others refused to ask. My own family was too typical: both my grandfathers sustained wounds that ironically saved their lives by forcing their return home, mangled in mind and body, where their suffering mutely infected their families and communities.

How much easier it is for everyone to shy away and try to forget such things. But I do believe this: “Those who cannot remember the past are condemned to repeat it,” as George Santayana famously said.

Our predecessors followed the passionately intense ideologues and imperialists of the late 19th and very early 20th centuries, all the way into a world war.  Our predecessors believed the soldiers of 1914 would be home for Christmas.

A century later, what can we learn from such hubris? What are today’s failures of imagination? Which ideologues and imperialists are we are failing to stand against? I ask because, I also believe, we have choices.

Further reading:
The World Remembers is an ambitious, global memory project that aims to  display the names of all known military war dead from both sides in nations around the world for the first time in history. “We will not only remember but we will also honour shared histories,” states the web site of the project by playwright, producer and director R.H. Thomson and lighting designer Martin Conboy. The project, funded by donors and governments, is scheduled to launch this fall. Over four years, in the chronological order in which they died, it aims to name soldiers on web sites, and project them on public buildings, in participating countries.