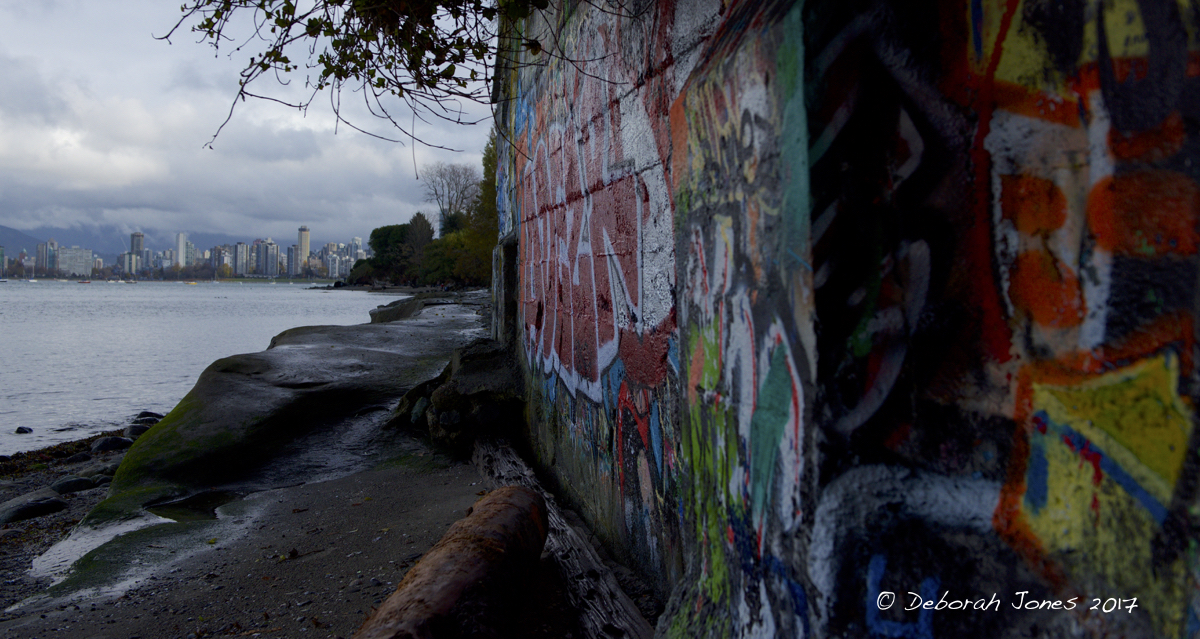 Graffiti hidden on the beach of English Bay in Vancouver’s tony West Side. © Deborah Jones 2017

The very first time he tried writing graffiti, Robbie, a talented teenager whose art has sold in galleries, blundered into Vancouver’s war on graffiti.

As he and another high-school student spray-painted images on a seaside retaining wall, an undercover police officer in Canada’s first designated graffiti squad nabbed the pair. Detective Valerie Spicer gave them a choice between a $500 ticket or community service with a peculiar Vancouver twist.

The teens chose service, in which offenders are teamed with established mural artists to produce sketches, given unlimited costly spray paint, then sent up for hard labour: creating murals under Vancouver bridges.

Robbie, who didn’t want his real name used lest he be linked with the despised “bomber” faction in the graffiti war, says being mentored by artist Milan Basic was an education and a privilege, but he is upset about being treated like a common criminal. “It’s a known free wall. It had been given to the graffiti people,” Robbie said indignantly.

The fact is, since 2002 there have been no free walls for “graffiti,” ”tagging” or “bombing” in Vancouver. A few writers, like Robbie, may have artistic talent to express, but officials say graffiti has been taken over by bombers who compete to quickly scrawl crude initials, or tags, in as many places as possible.

Respected bombers only use stolen paint and tag illegal places — the riskier, the better, said Mr. Basic, 34, an illegal writer in his youth. Outside the subculture, their work has few fans.

Vancouver police consider bombings so addictive, crime-ridden and expensive that it set up Canada’s first graffiti unit. “There have been stabbings and fights,” Det. Spicer said.

Police aim to divert as many as 200 young taggers from illegal graffiti to legal artistic expression.

Graffiti police officers co-operate with the municipal graffiti management program, which employs bylaws, public education and city cleaning crews to wipe out illegal graffiti within 14 days. For the offenders, there’s a carrot-and-stick approach.

The carrot is encouragement to create approved public art, and to date it’s resulted in 100 murals splashed on city bridges and underpasses.

Some of these, expressing hip-hop, transportation or animal themes, are created by the offenders. Others are by established commercial artists, and are increasingly sophisticated.

Last Saturday, Vancouver held a graffiti competition with 30 top writers, handing out prizes of $1,000 to the top four and an honorarium of $100 each for the rest. The murals, all created in six hours from sketches, are blazes of colour and shape that catch the attention of motorists on the Seymour Street off-ramp from the Granville Street Bridge.

The rationale behind the murals, said Jag Senghera of the city graffiti program, is the criminological theory that curbing small offences deters offenders from progressing to bigger crimes, and fixing broken windows and cleaning graffiti deters vandalism by improving civic pride.

Mr. Senghera said thatVancouver’s visible graffiti has declined by nearly 90 per cent, with about 68 of 5,138 buildings currently tagged, compared to 450 in 2001.

Debate rages in many cities over the artistic value of graffiti. Mr. Basic, who won $1,000 on Saturday, said he finds almost all graffiti pleasing. He now has a career painting film sets, which started with the now-cancelled TV series Dark Angel. The father of two young children, Mr. Basic uses his graffiti art to support his family and, on the side, still splashes his trademark nature images throughout Vancouver.

“Sometimes I paint commission pieces,” he says, “or I approach a store owner who’s got a graffiti problem, say I’ll paint a wall for free or sometimes for money.”

While graffiti has a venerable history in North American art, starting with highly stylized images in New York in the 1970s, style has been replaced by straight vandalism, Det. Spicer said.

She said the public, especially parents of teenage boys, should consider tagging illegal vandalism in an increasingly dangerous subculture, where teenagers rub shoulders with taggers who also commit serious crimes, like stabbing.

“Graffiti is extremely addictive,” she said, because taggers become hooked on fumes from solvent-based paints as well as the thrill of risk-taking. “They’ve fallen off buildings and been hit by trains. They’re usually piss-drunk.”

With increasing publicity and official attention, graffiti seems to be subject to massive cultural confusion. While cities and business owners call it vandalism, others respect it as edgy art. Its death knell as a subculture, however, may be its evolution into a mainstream marketing tool, with graffiti increasingly used in wallpaper and fabric design and even billboard advertising.

Robbie, who disparagingly calls the bombers “stoned bums,” still insists that he was exercising legitimate artistic expression by spray-painting an obscure retaining wall. “It’s not what I would consider to be a crime to do it.”

This story originally appeared in the Toronto Globe and Mail on July 11, 2005.