On the death of Cuba’s Fidel Castro 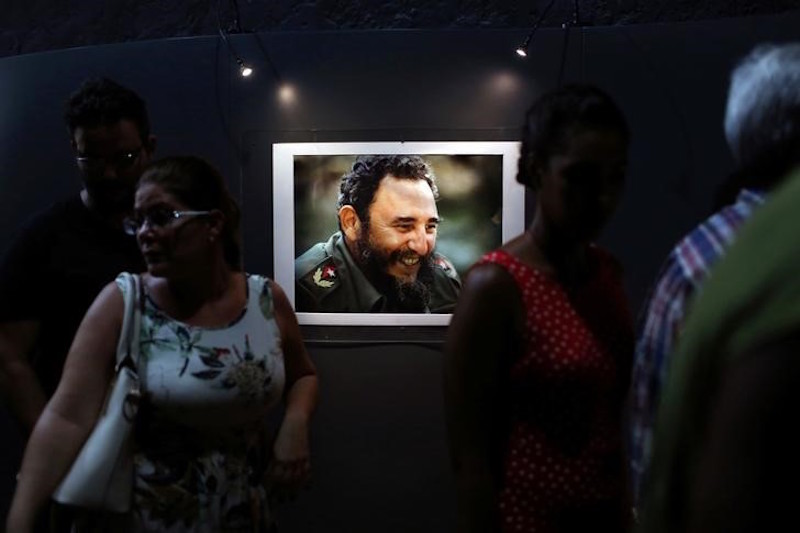 Fidel Castro died, age 90, in November, 2016. Above, People look at a picture of Cuba’s former President Fidel Castro during the opening of the exhibition “Fidel” in Havana, Cuba, August 12, 2016. REUTERS/Alexandre Meneghini

I first went to Cuba in 1995, on a magazine assignment. Before I left a good friend, who travelled widely on government business, said it was the only Latin American country she knew where no children begged in the streets. I kept her comment in mind as I read up on the criticism of Cuba’s human rights and economic record.

At the airport at Holguin I encountered armed guards, enforcing Cuba’s then-rule against bringing in magazines, books or newspapers. Buildings everywhere were riddled with bullet holes, mementoes of the revolution. People were thin and food –- which mostly consisted of rice and beans — was scant, following the collapse of its ally the U.S.S.R. Cuba’s air roiled with black oily exhaust belching from ancient vehicles; taking public transit required clambering into the back of a dump truck.  Once in Santiago, a tour guide noted matter-of-factly that Cuba used firing squads for capital punishment.

But my friend was right: there was not a beggar to be seen. Children dressed in sparkling white walked to school in lines. Almost all of the adults I met had post-secondary education; my assigned driver had a PhD in anthropology and was married to a physician. Everyone had health care. Though Cubans were poor, no one I saw was downcast to the point of being broken. I still can’t say the same of other places I’ve been in the Americas — including the U.S.

Fidel Castro’s 1959 revolution has had mixed results. But as with most things in life, it’s not all good nor all bad. Cuba ranks 67th in the UN Human Development Index. Had Castro not revolted against the American corporate pirates who were then raping and ransacking the country, would it now rival perhaps Haiti (163), Nicaragua (125) or Honduras (131)?

My driver in 1995 said he hoped Cuba would change, open up to the world, allow him to travel. He was tired of being poor and hungry, he said. Then he frowned, and added, “But we have to be careful. We don’t want to lose what we’ve gained.”

Those gains — by a small, isolated, and impoverished country — are revealed in an adult literacy rate of 99.8 %, and statistics that put the far wealthier United States to shame in areas like infant mortality (Cuba’s rate of 4, compared to 6 in the US); life expectancy (Cubans live to 79.1 years, Americans 78.8 years. Sources: UNICEF Cuba; UNICEF U.S.)

Such are the things I’ve kept in mind, in the aftermath of Fidel Castro’s death this month, while listening to modern critics of Cuba’s human rights and economic record.