Halifax, NS, Canada —  In Halifax today, what used to be Africville , with all the rich and negative connotations of that name, is a little-used park on the windswept edge of Halifax harbor. From a stark concrete building nearby emanates the clamor and stench of the city’s garbage transfer station, which replaced the dump where many Africville residents once scavenged a living. Nearby, cars speed past on a busy artery. 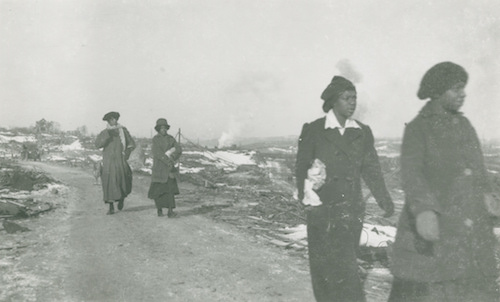 Little is left here of the vibrant and controversial community of about 400 black people who had to leave the area in the mid-sixties because it was thought to be unfit for human habitation. The exiles continue to feel their loss.

The dispersion of residents from Africville, mostly into public housing, remains a sore point for Nova Scotia blacks. Africville is bitterly and romantically remembered as an impoverished but solid community wiped out by discrimination.

At the time, the government-organized move was supported by black leaders outside the community. Critics now charge that they considered Africville only as a blight affecting the stature of the rest of Nova Scotia’s blacks.

Linda Mantley, whose family roots in Africville went back to the last century, was a teen-ager when her family was moved into public housing in the North End of Halifax.

“I only wish I had been older at the time,” she said ruefully. The objectors to the move, mostly young people, were hushed by others who did not want anyone branded as a troublemaker, she said.

“If we had been older . . . if we knew what we know now, we would have fought it. We would have asked for money to fix up the houses and install city sewers and water.

“Now a lot of people got a lot of heartaches.”

“I really think it was just incredible naivete – you don’t solve a community problem by eliminating the community.” — Alexa McDonough

Despite being a distinct community for about a century, Africville did lack public services such as sewers and drinking water. Houses were condemned in several reports as woefully inadequate. And as government officials investigated ownership of the land before the relocation, they found only a few deeds and some claims of squatter’s rights. The ownership of some land was simply untraceable.

“The community was independent; it functioned on its own without the help of the city, with its own school, hall, church, a number of stores and a post office,” Ms Mantley said. “A lot of people, if it was possible to get their land back somehow, would live back there again. I don’t blame them. Home is home is home.”

In 1981, the Africville Geneology Society was formed by a group of ex- residents to bring people from the neighborhood together each year “and to deal with past, present and future fears that involve Africville,” said Ms Mantley, a founding member. More than 3,000 are expected to gather in what is now Seaview Park for a reunion July 28 to 31. Mr. Carvery says they will come from throughout Canada and the United States.

“The word Africville continues to have powerful meaning for many of the former residents, and indeed for Nova Scotian blacks in general,” said Donald Clairmont, a sociology professor at Dalhousie University. Last year, he and Dennis Magill of the University of Toronto published the second edition of the Life and Death of a Canadian Black Community.

“Gone are the people, their community, their – and especially others’ – debris. Yet Africville still generates warm memories and purposive identity for its relocated people and their children and is still a rallying symbol in the black subculture,” they wrote. “Subsequent to the relocation, Africville became a kind of red alert, signalling danger to black community and traditions in the guise of city development projects, area upgrading and gentrification . . .”

Africville life was not sanitized or homogeneous, but offered a rich texture, Prof. Clairmont said. “And the fact that the community was taken away from them rather than they themselves migrating from it adds a profundity to their grievance.”

Ms Mantley now lives with her family in Uniacke Square, a dilapidated public housing project in Halifax’s rough North End which the provincial and federal governments are renovating. Elderly people who were moved from Africville found the change especially difficult, and are still struggling, she said. When the restoration of Uniacke Square was announced in 1986, for example, many feared it would mean another relocation.

One main reason why the memory of Africville remains a bitter one, observers say, is that promises of better housing and job training made at the time were not kept.

People “never did get the new start promised them in the relocation rhetoric. Many indeed are still suffering from socio-economic disadvantages, and live in more crowded and bureaucratic public housing,” Prof. Clairmont said.

“Very little groundwork had been done to really help people deal with what was an absolutely massive transition,” recalled Alexa McDonough, whose first job as a young city social worker was to help with the relocation, and who says she had doubts about it even then.

“People had rent and other expenses to pay all of a sudden. There was no really coming to terms with the amount of disruption, massive transition. There was a community support and way of life in Africville that was devastated in the relocation,” said Mrs. McDonough, who is now leader of the Nova Scotia New Democratic Party.

“Although I think it’s not entirely accurate to have romantic notions about how idyllic existence was in Africville . . . what they gave up was not compensated for.”

She noted that many “have taken advantage of new opportunities . . . but there is also an overwhelming sense of loss of cultural identity.”

Critics of the relocation have charged that the city simply wanted the land. Mrs. McDonough has another explanation.

“I really think it was just incredible naivete – you don’t solve a community problem by eliminating the community.”

“People did feel then you could solve all the problems,” Prof. Clairmont said. “Put a social worker in there and he would look after their interests. When I (later) went to the human rights group and asked them what happened, most of them were surprised to learn there never was any employment program. Yet they were the ones who were supposed to be the watchdogs . . . Many of them were naive. They felt the relocation had been successful.”

“Nova Scotia blacks remember Africville . . . also because of what has happened to the rank and file of Nova Scotia blacks,” added historian Bridglal Pachai, director of the provincial Black Cultural Centre. “A few black professionals are in good places . . . but for as long as some 50 to 70 per cent unemployment rates apply to many of the predominantly black settlements of Nova Scotia, Africville will also be a symbol of the difficulties facing blacks in Nova Scotia.”

Most former residents admit Africville will never spring back to life. But Ms Mantley, for one, wants more information about it to be available in libraries and schools, and for its story to be told in history classes.

To no avail, Mr. Carvery petitioned the city last year to review the lot of Africville residents, and make good on promises of housing, job training and job opportunities.

This story was originally published in the Globe and Mail FOCUS section, on Saturday, July 02, 1988

If you value this story, the author would appreciate a contribution of .27 Canadian to help fund her ongoing work and pay for this site. Click on paypal.me/deborahjones to be taken to Deborah Jones’s personal PayPal page.

The United Nations Working Group of Experts on People of African Descent criticized the destruction of Africville in a report on Sept. 25, 2017.  See the Canadian Press report here.

A video made 50 years after the relocation of Africville and the razing of its church:

Deborah Jones is a partner in and founder of Facts and Opinions.