Who Are the Hypocrites on Lima’s Carbon Footprint? 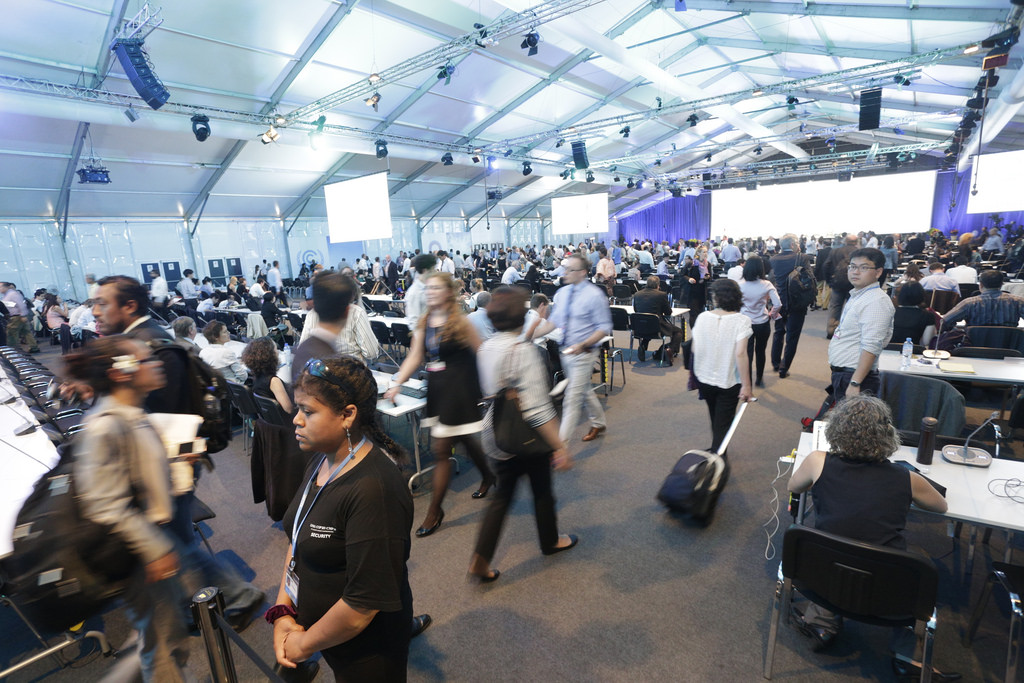 The flights climate summiteers took to and from Lima will amount to 0.0006 of a per cent of this year’s global air travel, and an even more infinitesimal share of global greenhouse gas releases, notes Chris Wood. Above, participants at COP20 at Plenaria-de-Cierre, Lima. Photo by H. Berninzon, © COP20

The charge of hypocrisy, let’s be clear about it, is deeply hypocritical.

The argument turns up regularly. To paraphrase this week’s example: the people who released all those greenhouse gasses to get together in Peru for the 20th Conference of the Parties (COP) to the United Nations Framework Convention on Climate Change, have no right to lecture the rest of the world about carbon. The same argument was trotted out here in Canada recently, to scold activists for driving to a demonstration against a bitumen-tar pipeline.

This is one of those many supple and seductive but wrong aphorisms that emerge regularly, cunningly honed, from the political right’s constellation of propaganda-research institutes. Like ‘If guns are outlawed, only outlaws will have guns,’ ‘Job creators’ and the ‘freedom to choose’ (applied to some things, like charter schools, not to others, like marriage partner), these are designed to short-circuit reason and induce a visceral, pre-cognitive, jerk of the judgmental knee.

They are designed, in short, to con us. Let’s take the case at hand.

The charge that climate activists, scientists and policy-makers are hypocrites because their travel to Lima, mainly by air, released greenhouse gasses, has a clear intent. It is meant to invalidate not only the individuals but their entire purpose in travelling. Which was, let’s remember, to try to find a way for humanity to avoid destabilizing our climate to the point that hundreds of millions of us, perhaps billions of us, die.

Hypocrites are not to be trusted, the charge implies. Their actions betray their words. Ignore them.

This would be dangerous counsel even if the premise were true. Let’s accept for the moment that all 9,000 of the diplomatic, political and NGO delegates crowding Lima’s hotels are hypocrites; that in their private lives they scarf down beef, commute by SUV, and ooze every other carbon-heavy habit. The climate is unmoved. It does not respond to moral logic. It is impervious to ethics. It counts only the energy in molecules — in air’s native oxygen and nitrogen, in its carbon dioxide and its many carbon cousins, in the liquid, solid or gaseous hydrogen dioxide molecules that most of us know better as water.

Climate overload is a zero-sum game. So yes, every greenhouse molecule those ‘hypocrites’ release on their way to and from Peru, (not to mention all the other ecological impacts of their wining and dining in Lima’s hotels and restaurants), eats up some more of the limited carbon ‘budget’ we can afford to release without (we think) tipping the world’s weather patterns into unpredictably inhospitable states of thermal adaptation.

In the scale of global releases however, those are miniscule. The flights the summiteers took to and from Lima will amount to 0.0006 of a per cent of this year’s global air travel, and an even more infinitesimal share of global greenhouse gas releases. (The contribution of the handful of demonstrators who drive gas-burning vehicles to local protests, is even more vanishingly marginal.)

If the men and women meeting in Peru succeed however, they may be able to preserve the climate that created us. That would entail agreeing on a disciplined plan to bring the world’s fossil fuel use down fast enough to reach zero by around the middle of the century. I have already said that I’m not optimist on their chances. But if they pull it off, it would be a pretty good return on the greenhouse gasses invested to accomplish it.

Irrelevant from the standpoint of climate chemistry and in the event of the meeting’s success, the charge of hypocrisy against the Lima attendees reveals its own hypocrisy if we ask the accusers, “Well then, what were the men and women from 195 countries all over the globe to do that would not have been hypocritical?”

Not release any greenhouse gasses while getting together somewhere? By that logic, only those in a position to walk, take a horse-drawn carriage or a sailing ship to their common destination would be in a position to speak collectively on the climate without being accused of hypocrisy. That this is ludicrous does not mean it is not part of the non-rational conclusion the charge is intended to induce us to reach.

But often the charge of hypocrisy is accompanied by a more reasonable sounding alternative. Clearly a great deal of preparatory work for the COP 20 meeting was conducted successfully by email and document exchange and Facetime or Skype. Couldn’t the global meeting have been a similarly virtual event?

This is another of those initially plausible objections that doesn’t stand the test of experience in the real world. No-one who has ever ‘attended’ a virtual meeting, either as the remote call-in sitting at home with the cat on their lap trying to keep names and voices straight, or straining with others in the room to hear what that distant voice is saying, will for a moment confuse the experience with the full-bandwidth communication that occurs face to face.

The negotiators facing each other in Lima are wrestling with large and delicate subjects. Whatever outcome they reach there and thereafter, leading up to a global leaders’ summit on the climate next year, will be assaulted by the fossil-fuel industry’s proxy army of media and academic mercenaries, and minutely examined by their national audiences for every apparent concession.

Doing a deal, and reaching a critical mass of mutual confidence that its commitments can be sold back home, will require every picogram of trust that can be distilled from tone of voice, from eye contact and body language, and from casual remarks and chance encounters at the edge of the formal dialogues.

You don’t do that by email.

(As, in this media age, one youtube video of polite demonstrators blocking an oil crew is worth a thousand e-mails.)

The accusation that climate negotiators are hypocrites for taking airplanes to look each other in the eye and try to save a human-friendly climate, is revealed in all its carefully crafted duplicity. It is a trumped-up charge, cunningly laid so that the only way to avoid it would be to cripple or abandon that effort entirely.

I hope the men and women meeting in Peru prove my pessimism wrong. Are there some hypocrites sipping pisco sours? I’m quite sure there are — especially among the layers of industry and environmental lobbyists. I also don’t give a damn.

They’re not the only ones.