Isn’t It Hysterical? The cliff is ahead. We have the tools to see it 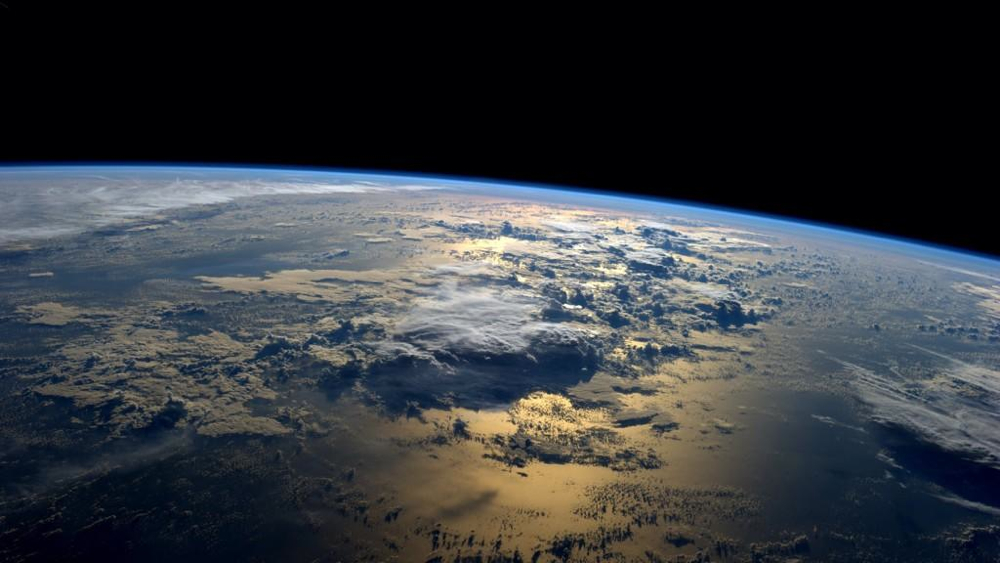 The single most useful thing that many national governments could do for their natural security today is to start by taking a good long look at it.

How does this come up? Funny story. I learned a new word recently. This doesn’t happen as often as it used to in my line of work, so I enjoyed it. The word? ‘Hysteresis.’

The term seems to have a range of definitions, some more negative than others: it can mean a deficiency or lack, for example. But its dominant meaning is of a lagging effect: when something in a system’s past influences how it responds to the present. All of human history, it turns out, really has been as hysterical as some of our darker comics suggest.

But so are ecosystems at scales all the way up to the global. That is: incremental damage can accumulate over time, rendering an ecosystem imperceptibly less robust until a critical threshold tips it, usually irreversibly, into a new state.

Another example is the hysteresis in the climate system. As worrisome as the climate disruptions we are enjoying now may be, they are bound to become more violent for another 30 to 40 years regardless of what we do about emissions in the meantime. That is because of the hysteresis in the ocean-atmosphere system, as greenhouse gasses from car exhausts and power plants slowly accumulate in the air, rise to upper atmospheric layers, and then trap more heat in the planet, which in turn incrementally amps up the forces that drive all the dynamic processes that we call weather: winds, storms, rainfall (and snowfall), drought — even cold snaps.

This may be hysterical, but it’s no laughing matter. Because what this funny word really means for us in the present, is that we are walking in the dark toward a 1,000-ft precipice. As Anthony Barnosky and 21 collaborators write in a paper for Nature, the critical threshold, the edge of the cliff, “is generally not known in advance.”

Barnosky and his collaborators — mainly biological scientists from several countries — present evidence that “such planetary-scale critical transitions have occurred previously in the biosphere, albeit rarely, and that humans are now forcing another such transition, with the potential to transform Earth rapidly and irreversibly into a state unknown in human experience.”

(Let’s take a moment here to contemplate that last phrase: “rapidly and irreversibly into a state unknown in human experience.” Think Kirk and Spock beaming down to a planet that might be boiling hot or crawling with carnivorous vegetation.) 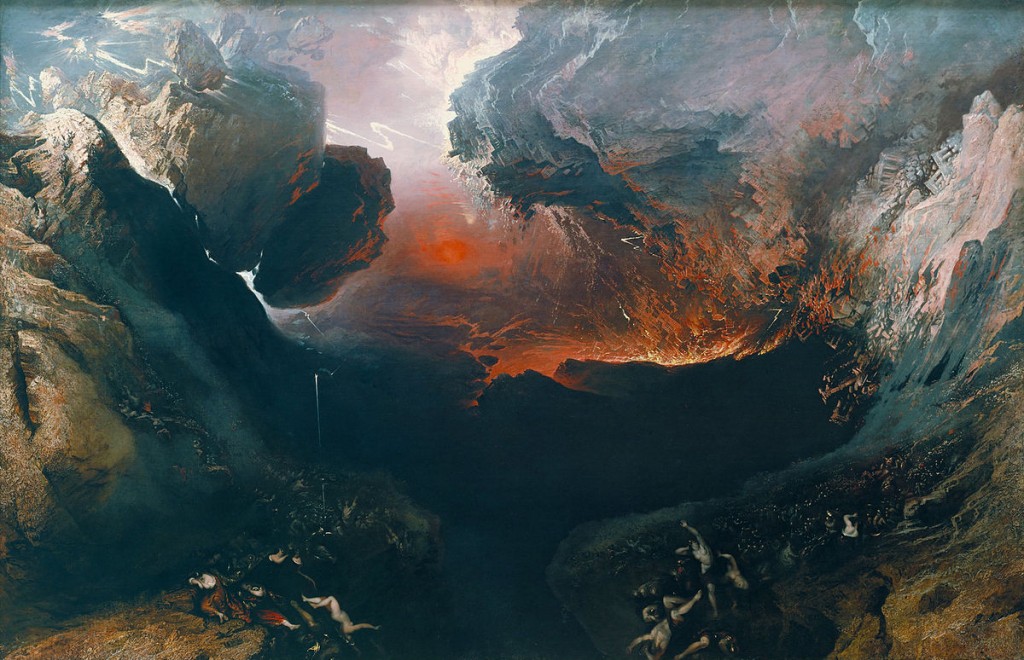 Governments, writes Chris Wood, need to invest equally in the “environmental intelligence systems that will warn us before we bring on eco-geddon.” Painting by John Martin – The Great Day of His Wrath, c 1853. Public domain via Wikipedia

When this has happened before, everything has changed. Species were exterminated. Old species that once dominated became vulnerable and diminished prey for brand new evolutionary expressions. Entire biomes disappeared, or changed, or moved.

The combination of ecosystem fragmentation and repurposing for human use, urbanization, resource extraction pursued to the deepest oceans and most remote mountain valleys, and climate change, Barnosky et al add, “far exceed, in both rate and magnitude,” the known “forcings” that tipped the planet over earlier thresholds.

An illustration they offer is that humanity has transformed roughly 43% — nearly half — of the Earth’s land surface from wild vegetation to farmland or cityscape. That is more than was transformed by the last great natural state-change, when glaciers retreating over a much longer period of time exposed about 30% of the Earth’s surface to the light for the first time in a few thousand years.

Over the space of three centuries, human industry will produce by 2070 or sooner a global average temperature “higher than it has been since the human species evolved.” Actual summer highs wherever the teenagers of 2014 are (maybe) retiring into senior-hood, will likely be much hotter still.

Those are the kinds of changes, on global scale, that have persuaded these leading biologists that, “the plausibility of a future planetary state shift seems high, even though considerable uncertainty remains about whether it is inevitable and, if so, how far in the future it may be.”

The cliff is out there. If we walk over it, all bets are off for humanity. We’re just not sure exactly how far away it is in the dark, or even whether our next step will take us over the edge.

But — and here’s the point — we can find out. We have the tools and the analysts, if we choose, to shed some powerful light on our ecological surroundings, perhaps enough to penetrate the darkness, locate the edge of the cliff, and turn back.

As Barnosky and pals point out, sometimes thresholds give advance warning. Systems approaching the brink display some common features. They recover more slowly from disruption (think Atlantic cod, still scarce two decades after Canada put a moratorium on fishing them). “In-state fluctuations” become wilder and less predictable (the worldwide increase in extreme wind and rain storms; eastern North America’s aberrant ‘polar vortex’ winter of 2013-14). Conditions “flicker” rapidly from one state to another (those rapid swings from summery to wintery to summery that are increasingly seen in temperate zones).

The international authors suggest that by opening our eyes to these and other signs, we may be able to determine where some of the riskiest thresholds lie — and how to push them back. In particular, they urge intensive research on three dimensions.

Experience at regional scales suggests that state shifts become increasingly inevitable when incremental changes affect about half of any given ecosystem’s extent. We’re up to 43% now on land; we don’t know how much of the ocean we’ve transformed, what with dead zones and floating plastics and acidification. To find out we need a much ramped-up global monitoring and measuring capacity, at sea and on the land and in space, to develop a clear, accurate and real-time picture of what’s up with these major planetary systems.

That needs to be matched by equally close ongoing inventories at local scales, “tracking changes within many different ecosystems in a parallel fashion,” paying particular attention to how global changes are impacting local ecosystems and how local changes are accumulating into planetary-scale impacts — death by a thousand million cuts.

Then the local and the global need to be examined for feedback loops and mutually reinforcing change multipliers.

Then maybe we’ll see the brink coming, and know which way to turn to avoid it.

In the analogy of national security to natural security, Barnosky and his fellow-authors are describing the nuclear finish: the end-game for the industrial evolutionary experiment and possibly all of humanity.

Just as national governments have invested in a wide array of intelligence assets — land and air-based radar systems, satellites and spies — to watch for incoming ICBMs, they now need to invest equally in the environmental intelligence systems that will warn us before we bring on eco-geddon.

We need more biologists. More earth scientists. More oceanographers and population geneticists. We need to give them both more tools and more data, taking advantage of plummeting technology costs to ‘wire the world’ for real-time monitoring of as many natural systems as we can identify. And we need more stand-off capacity: experts and big-data-crunching computers to integrate the global with the local into as complete a picture as our considerable skills can generate of what’s ahead.

Otherwise, we’ll be laughing in the dark until that last long scream.