A Reflection On Easter, Math and Judas 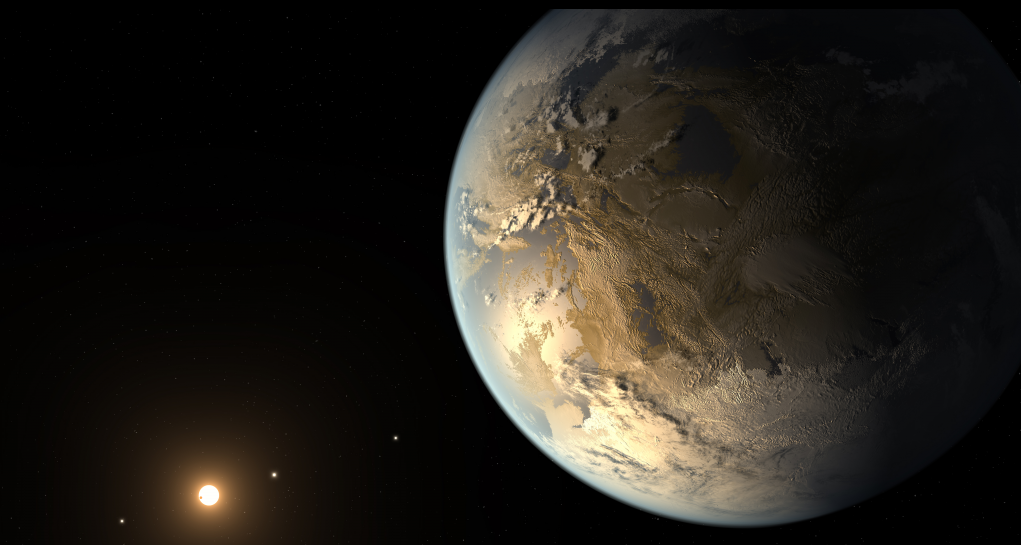 The Goldilock World in Cygnus, Kepler-186f. In April astronomers reported the discovery of the first validated Earth-size planet to orbit a distant star in a zone habitable for life: not too hot, not too cold, just right. It’s 500 light years away from Earth. Image courtesy of NASA Ames/SETI Institute/JPL-Caltech

It is Good Friday where I live, in the most Catholic part of old Mexico. The entire week and weekend to come are turned over to a passionate mix of Christian and not-so-Christian rituals: an overnight pilgrimage of the faithful in their hundreds bearing a life-size effigy of a suffering Christ, an entire afternoon devoted to the satisfaction of blowing up life-size paper Judases (although some bear a suspiciously strong likeness to certain political figures — see videos, below).

It is Easter. Which turns out, internet memes notwithstanding, to have nothing to do with Ishtar, a Canaanite goddess of war, fertility and something called “sacred prostitution.” What it does have to do with is the hope that comes with spring time, with the return of life after the little death of winter, that is celebrated by different names in different ways everywhere we are on the planet.

I am not a Christian, but we need that hope just now. There are seven billion reasons afoot on Earth to fear that our savagely brilliant species is on the bloom-and-bust track of the most insentient algae that periodically blossom across hundreds of miles of ocean until they exhaust its oxygen, collapse and die.

No-one who monitors observations of things like marine productivity and the vulnerability of food crops to heat, can reasonably feel very optimistic. There is simply not enough planet to go around, as we are now treating it, our selves and each other.

Most human beings, even if this thought occurs to them, shove it immediately aside in favour of more urgent ones: the demands of occupation, of family, of securing food, of staying alive today. Yet their understandable inattention does not change the track we are all riding on; it simply allows us to dig our shared ecological grave a little deeper.

Others fantasize. The knight on the white horse in this fantasy, the cavalry cresting the ridge to rescue the embattled settlers, is escape to a new and as-yet-unplundered planet. This is Stephen Hawking’s dream (perhaps more forgivable in a man whose physical condition constrains much else). And it recently got a shiny new fantasy object: Kepler-186f. Not the snappiest name in the real-estate game, but it has the advantage of being, so far, completely unsettled by people.

Kepler-186f is the latest discovery by astronomers engaged in the flourishing new field of exo-planet exploration: that is, the search for planets circling other stars than our own sun. The Holy Grail of this pursuit is the planet just like ours: a blue planet, one circling a star at that Goldilocks distance where the heat and light it receives are just enough to keep its surface temperature within the range of not too far below zero Celsius and somewhere under 100 Celsius — the range in which water can persist as a liquid without freezing into a permanent ball of ice or boiling off, as appears to have happened to our neighbouring planet, Mars.

Kepler-186f is that Goldilocks planet. Described by its discoverers as “an Earth twin — an Earth-sized planet in the habitable zone of a sunlike star,” Kep (may I call you Kep?) is a bit larger than our home planet, and it circles a so-called red dwarf star, with less wattage than our own sun. Nonetheless, astronomers’ calculations put it in the sweet spot for life, not too hot, not too cold, not so big that gravity drags everything down.

You can see where this is going. Star Trek childhoods and a present of holodeck-quality technology inspire dreams of the ultimate geographic cure. We’ve raped this planet to a fare-thee-well? No prob. On to the next. More than 200,000 humans have apparently applied for the first test mission: a private colony on Mars’ very non-Goldilocks surface.

Surely if that works out there’s no reason why humanity can’t bail on the ravaged Earth and colonize Kep, only 450 light years away.

Well, yes. Inspired by Mr. Hawkings, I did some math. It may not be up to his level but it will do. Given the time it now takes one of our spacecraft to reach Mars, and what a ‘light year’ really means (the distance a particle of light travels in a year’s time) it would take those hypothetical colonists roughly 44 million years to reach their fresh-off-the-assembly-line new planet.

Let’s put that in perspective. Forty-four million years ago, what we now call Europe had only recently parted ways from what’s now the Americas. It was warm enough to grow swamp cedar and redwoods on Ellesmere Island, even then close to the North Pole. New kinds of post-reptilian, warm-blooded, live-young-bearing creatures — later to be named ‘mammals’ by some of their very distant descendants — were running around the planet for the first time. The first humanish primate wouldn’t show up for another 43 million years. Anatomical humans, half a million years after that.

Put it another way: reaching Kep would take more than 100 times longer than the entire existence of humanity on Earth so far. Even imagining we could engineer the ride, the odds are that whatever stepped out of it at the other end wouldn’t be one of us, but some newly evolved post-human being.

Of course, even in the escape fantasy, most of us get left behind to die. And that part may not be fantasy at all. The math of providing the consumer lifestyle for all seven billion of us is as realistic as the math of travelling to Kepler. The odds that our species will escape the next century, let alone 44 million years, without a great deal of untimely human death, look longer every day.

But life is hard to extinguish. The life that we are a part of here on Earth has fought back from half a dozen catastrophic waves of mass extinction before the one we are now visiting on the planet. In each, of course, many species died out, some adapted. Humans are pretty good adaptors.

Death is the ever-present subtext of the bunnies and coloured eggs. The primal celebration embodied in the Christian account of resurrection and rebranded as Easter, is that life returns. And even if we’re not all going to participate in it, that’s something we might all take heart in. (Although blowing up a politician or two in effigy also presents some attraction.)

Further reading and watching:
NASA press release on Kep: http://www.nasa.gov/ames/kepler/nasas-kepler-discovers-first-earth-size-planet-in-the-habitable-zone-of-another-star/
Paper on the finding of the planet in the journal Science, published by the American Association for the Advancement of Science (Paywall): http://www.sciencemag.org/content/344/6181/277
Easter is not Ishtar, the Belle Jar: http://bellejar.ca/2013/03/28/easter-is-not-named-after-ishtar-and-other-truths-i-have-to-tell-you/
Mars colonists: http://www.space.com/24112-private-mars-colony-1058-martian-volunteers.html