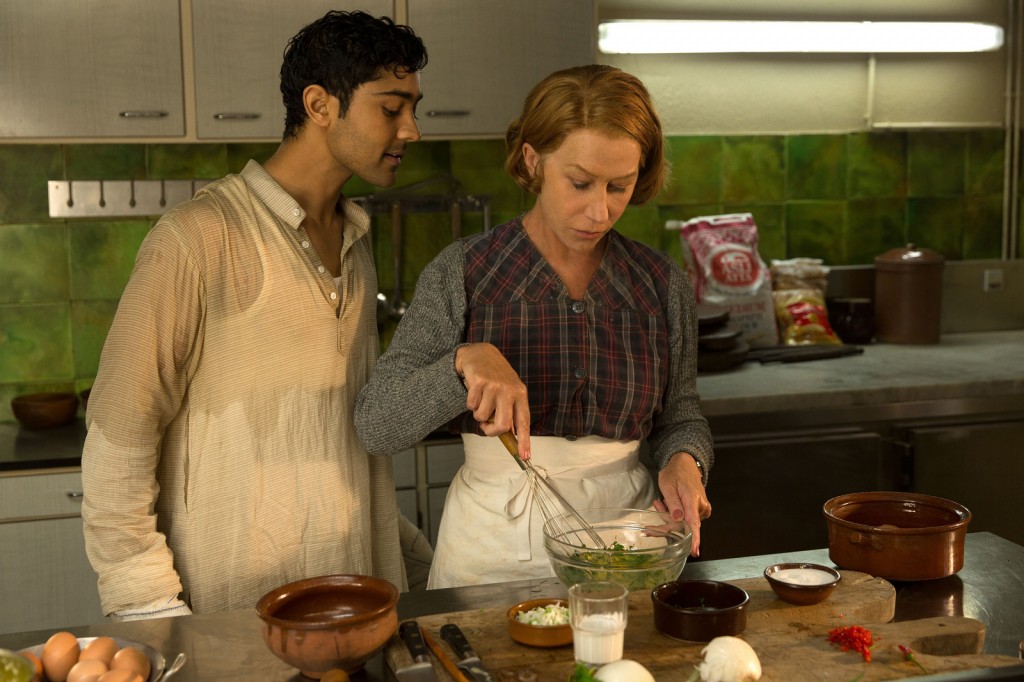 Manish Dayal and Helen Mirren in The Hundred-Foot Journey, based on the book of the same name by Richard C. Morais. Photo by François Duhamel © Dreamworks and Walt Disney Pictures 2014

The film The Hundred-Foot Journey is delicious, an amuse-gueule — no more, no less.

If you’re going to venture into a cinema for a summer movie about French food, is not delicious light fare what you’d expect? Especially when delivered by Chocolat director Lasse Hallstrom (with Steven Spielberg and Oprah Winfrey lending their names as producers)? Especially given lead actors Helen Mirren and Om Puri, with the fresh-faced Manish Dayal and Charlotte Le Bon? Is delicious not the forte of Hollywood/Bollywood?

On the menu: a family of foodies is forced by some unexplained political violence to abandon their well-established restaurant, somewhere in India. They flee to Europe. They end up in the South of France, and open an Indian restaurant. They clash with the classical French establishment located 100 feet across the street  — get it?  — owned by the formidable Madame Mallory (Helen Mirren).

If you want edgy, instead of “delicious,” this is most definitely not the film for you. If you want nutrition or at least substance, run, don’t walk, someplace else. Entering the wrong establishment in the first place was the mistake made by the anointed reviewers, those who would dictate our taste in film.

Reviewer Christy Lemire at the site of the Grand Old Man, Roger Ebert, delivered a stentorian verdict: “… a film that demands that you take it seriously. With its feel-good themes of multicultural understanding, it is about Something Important.” Nose in the air, she took a few bites, sent it back to the kitchen, then stomped out the door.

Critics cited by Rotten Tomatoes found the fare lukewarm if not entirely disgusting: their average rating is in the mid-60s. The audience, on the other hand, lapped it up — they’re in the mid 80s at the time of this post. I’m with the audience. The sour reviewers need their taste buds sweetened.

You’re supposed to slurp it up, not analyze it under a microscope or count its calories. Seen in a cool cinema on a hot day, The Hundred-Foot Journey is an ice cream cone for our summer-heated senses. No more, no less. Yum.