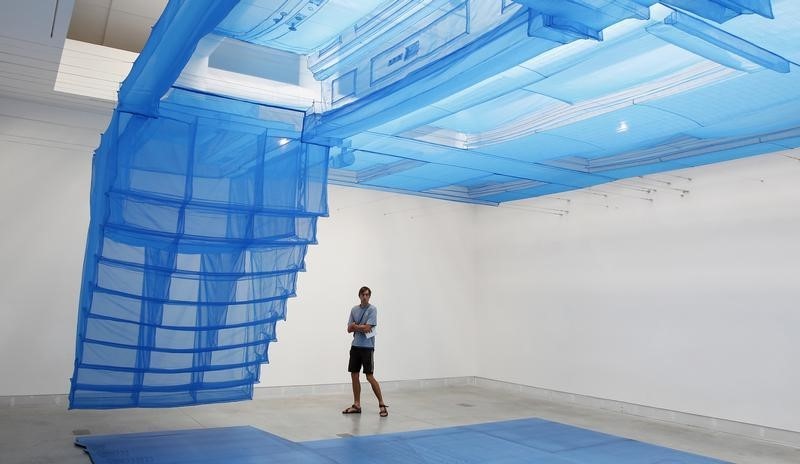 A visitor looks at an installation by Do Ho Suh + Suh architects during the Architecture Biennale Exhibition in Venice August 31, 2010. REUTERS/Tony Gentile

VENICE, Italy (Thomson Reuters Foundation) – The Venice Architecture Biennale is usually a showcase of prestigious architecture projects from around the world, but Germany’s entry this year has taken a different angle, focusing instead on simple shelters used to house asylum seekers.

The structures, designed and developed to deal with the influx of migrants into Europe from Africa and the Middle East, provide a direct contrast to Germany’s 2014 submission – a scale replica of the former German Chancellor’s residence.

The curators said they hoped the exhibition would inspire a revival of well-designed social housing across Europe. Rather than temporary shelters, governments should build large-scale quality homes for both refugees and citizens alike, they said.

“We don’t have a refugee crisis, we have a housing crisis,” said Peter Cachola Schmal, the pavilion’s commissioner and director of the Deutsches Architekturmuseum.

The decline of interest rates to historic lows has prompted many foreigners and investment funds to move into real estate.

“That means that prices in most cities are rising incredibly. The consequence will be a tremendous competition between refugees and all those looking for affordable housing,” he said.

“If nothing is done, the right wing will grow, and (public) opinion against refugees will grow. The first thing to do is build more affordable housing.”

This reflected governments’ desire to reduce the visibility and permanency of the projects, he said.

“The political will is not there to create normal housing for refugees,” Elser said.

“There are cases where it would be possible to build a normal four or five floor apartment building, instead of low-profile barracks. But they (governments) don’t want to draw attention to the buildings.”

Originally designed to be low cost, temporary solutions, in the long run such structures tended to be neither, he added.

The German pavilion also displays examples of buildings from earlier migration waves which are still in use today.

These include the Praunheim Estate in Frankfurt, built in the 1920s to house refugees from the central European region of Silesia. The houses, built over two or three floors, were partially constructed by the refugees, and have been modified and extended by the communities over many years.

Elser said housing officials should invest in modular multi-functional buildings designed for long-term use and adaptation – which are only marginally more expensive than the container villages now being erected in Germany and many parts of Europe.

The exhibition, ‘Making Heimat. Germany, Arrival Country,’ borrows its title and theme from the 2010 book ‘Arrival City’ by Doug Saunders, which argued that new migration zones can also be vibrant hotspots of cultural and economic activity.

To demonstrate the potential of immigrant communities, the exhibition also includes photographic displays and reportage from flourishing migrant districts in several European cities, including the city of Offenbach, near Frankfurt, where about 79 percent of residents have at least one migrant parent.

As well as showcasing refugee shelters, the curators have presented a series of policy proposals to governments which they believe will encourage the creation of livable, efficient and workable “arrival cities” for refugees.

The papers argue the extraordinary circumstances created by the most recent wave of refugee arrivals warrants the relaxation of planning restrictions to allow faster construction and development and residents should be allowed and encouraged to build extensions and improvements to their housing as needed.

Cachola told the Thomson Reuters Foundation that in Germany, well-intentioned, stringent building codes and energy efficiency standards are slowing down construction at a time in history when fast and efficient development is urgent and necessary.

The 15th International Architecture Biennale, which opened on May 28, is open until Nov. 27 and the German exhibit will tour and be shown in Frankfurt next year.