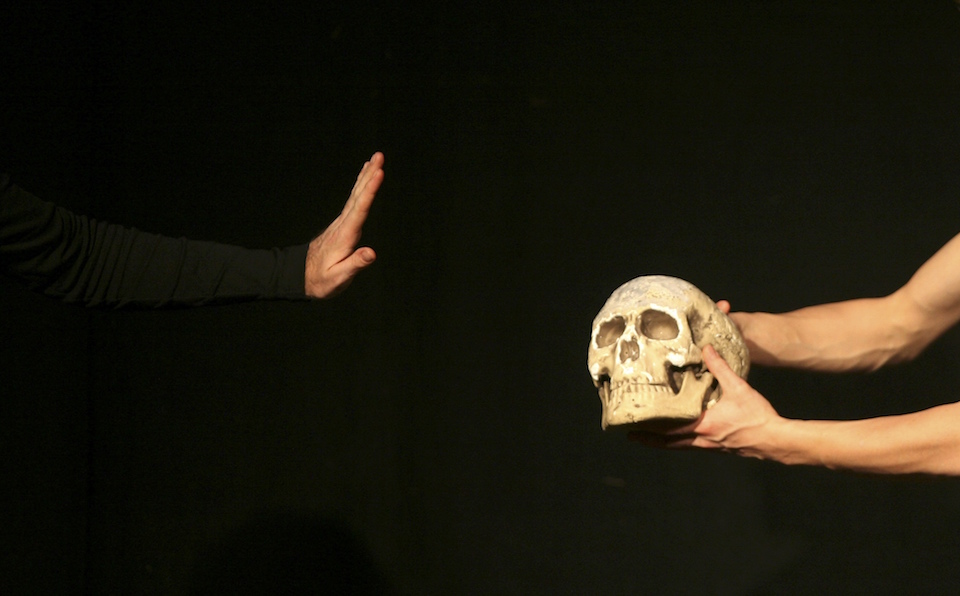 An actor performs during William Shakespeare’s theatre play “Hamlet” at the Jerusalem Centre for the Performing Arts in this file photograph dated December 11, 2008. REUTERS/ Eliana Aponte/files

LONDON (Reuters) – Shakespeare’s skull is likely missing from his grave, an archaeologist has concluded, confirming rumors which have swirled for years about grave-robbers and adding to the mystery surrounding the Bard’s remains.

Four hundred years after his death and burial at the Church of the Holy Trinity in Stratford-upon-Avon, central England, researchers were allowed to scan the grave of England’s greatest playwright with ground-penetrating radar.

But in the area under the church floor where the Bard’s skull was expected to be, they found signs of interference.

“We have Shakespeare’s burial with an odd disturbance at the head end and we have a story that suggests that at some point in history someone’s come in and taken the skull of Shakespeare,” said archaeologist Kevin Colls from Staffordshire University.

“It’s very very convincing to me that his skull isn’t at Holy Trinity at all.”

The findings deepen the mystery around Shakespeare’s last resting place.

The grave does not bear his name, merely this warning rhyme: “Good friend, for Jesus’ sake forbear, to dig the dust enclosed here. Blessed be the man that spares these stones, And cursed be he that moves my bones.”

In their quest to find Shakespeare’s skull, Colls’s team also investigated a long-standing tale that it was hidden in a sealed crypt in another church 15 miles (24 km) across the English countryside in Worcestershire.

But analysis of that skull showed it to be that of a woman who had been in her 70s when she died.

The story of Shakespeare’s missing skull appeared in The Argosy magazine in 1879, which blamed the removal on trophy hunters from the previous century when grave-robbing was common.

Skulls were worth collecting because genius, thought some at that time, would be evident in the remains of a man like Shakespeare, whose character Hamlet famously holds a skull while musing on death.

The scan of the grave where Shakespeare’s remains rest next to those of his wife Anne Hathaway was conducted in a non-intrusive way, said the team, who will present the results in a Channel 4 television documentary due to air in Britain on Saturday.

“There are so many contradictory myths and legends about the tomb of the Bard,” said Colls in a statement.

“These results will undoubtedly spark discussion, scholarly debate and controversial theories for years to come. Even now, thinking of the findings sends shivers down my spine.”