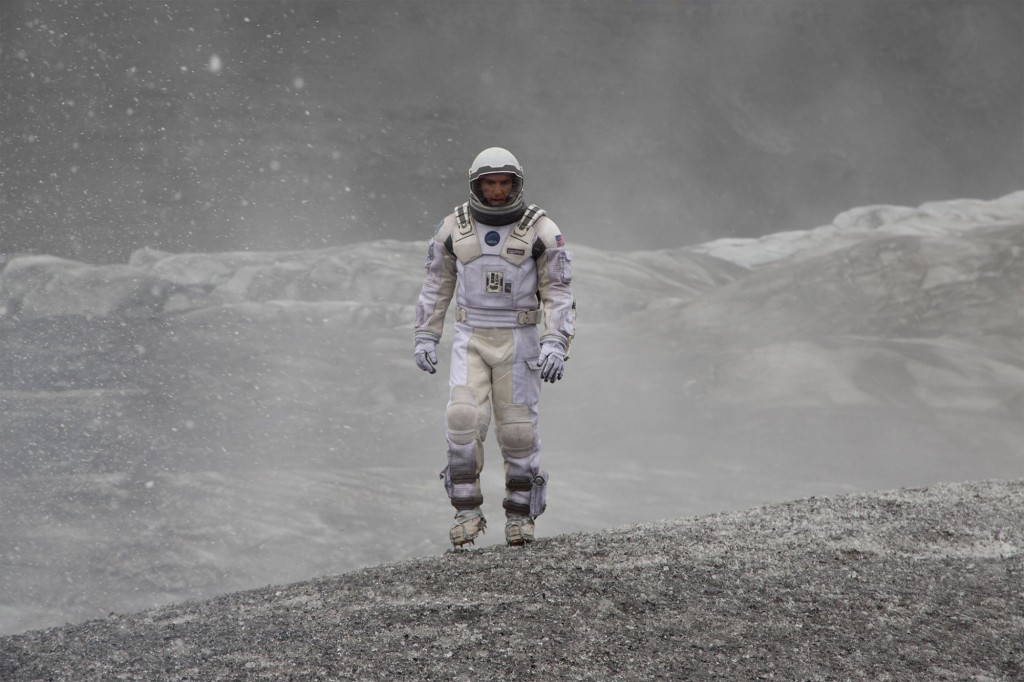 Note: this article has spoilers.

In Interstellar’s near-ish future, our climate has failed catastrophically, crops die in vast blights and America is a barely-habitable dustbowl. Little education beyond farming methods is tolerated and students are taught that the Apollo landings were Cold War propaganda hoaxes.

Worlds galactic distances away have been discovered via the wormhole, some of them apparently habitable and apt for colonisation. A small expedition traverses the wormhole and visits several planets, some near a giant black hole. Peril, conflict and soul-searching ensue.

Science and science fiction are uneasy relatives, and classic sci-fi often folds under scientific scrutiny. HG Wells wrote great and prophetic sci-fi, but the great (such as The War of the Worlds) wasn’t prophetic and the prophetic (such as The Argonauts of the Air) wasn’t great. Science fiction usually uses scientifically derived fictional concepts to pit humanity against a hostile universe.

Worthwhile sci-fi can be downright inaccurate. Wells’s rampaging Martian tripods survive in the public imagination while more realistic predictions of mechanised warfare fade. Orwell’s Nineteen Eighty-Four remains the relevant parable about totalitarian mind-control for all that its titular year came and went without copying its namesake. However, so-called Hard Science Fiction takes its science seriously, only adopting as premises real theoretical possibilities recognised by current science.

Hard sci-fi gives writers interesting constraints, but the results can date quickly and narrative needs can tempt even the “hardest” writers to fudge facts. That is the case with Christopher Nolan’s Interstellar. It might appear to be very “hard” – dealing with concepts rooted in actual science, but it only aspires to those ideals. The story plot fudges many scientific aspects.

Of course, there are science-fiction treats on offer: gnarly space-flight vessels spinning to produce centrifugal pseudo-gravity, hibernation in eerie-looking pods, a planet with icy clouds, familial relations strained by time dilation and witty robots that initially annoy but end up more sympathetic than most humans.

And it shows this with stunning imagery. There are beautiful depictions of gravitational-lensing by wormhole, distorted starscapes during wormhole transit and faux Earth interiors on a giant, revolving space-habitat. Wormhole mouths and black holes are depicted as genuinely three-dimensional holes, while the high-energy colliding matter in the accretion disc around a black hole’s equator is vividly portrayed. So impressively does Interstellar render these phenomena that if we ever see such things close-up, reality may suffer by comparison.

Nolan tries to get the science right most of the time. Just as one harrumphs: “genetic diversity?” when there is a mention of seeding other worlds, Anne Hathaway’s character neatly addresses the problem. Relativity does allow gravitation and motion to produce time dilation, which means that time plays out at different speeds for different people. Wormholes could theoretically connect otherwise distant space-time points. And, yes, “Hawking Radiation” means black holes aren’t strictly “black”.

But where it might annoy Hard sci-fi fans is that some essentials get fluffed. Visits to a planet’s surface could produce temporal discrepancies – an hour-long jaunt on the surface might seem to take years from the point of view of an observer in orbit – but only if the surface gravity is thousands of times stronger than that of Earth. Wormholes traversable by crewed spacecraft require unfeasible quantities of gravitationally repulsive “exotic matter”, which theoretically has negative energy density and breaks just about every energy condition we know.

Sneaking past a black hole’s event horizon, scanning the hole’s singularity and retrieving gravity-mastering data is impossible. As for falling into a black hole and seeing tidal forces disintegrate your vessel without making you into spaghetti, then entering a region prepared by your future self only to re-emerge into normal space-time via wormhole… well, criticism seems superfluous.

And, yet, this is a film worth watching. Interstellar offers much besides visuals to commend. It takes climate change seriously, is realistically cynical about political and educational preparedness for the future, doesn’t soften ethical dilemmas in saving humanity and suggests climate solutions will owe everything to scientific imagination and initiative.

Alasdair Richmond, Senior Lecturer in Philosophy at University of Edinburgh, does not work for, consult to, own shares in or receive funding from any company or organisation that would benefit from this article, and has no relevant affiliations.