A Crowbar In The Buddhist Garden: Writing From Prison 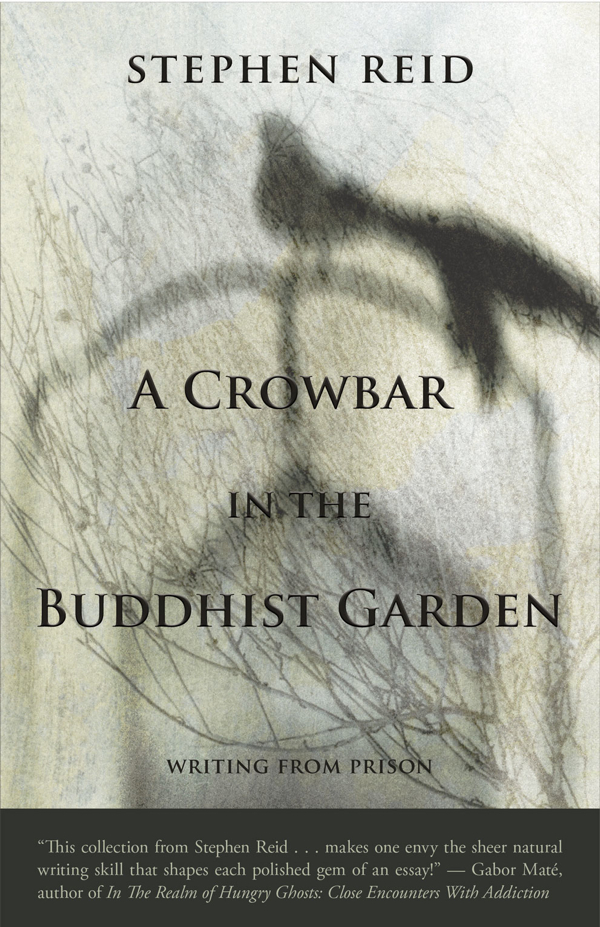 A Crowbar In The Buddhist Garden: Writing From Prison by Stephen Reid

I first interviewed Reid in 1988 when I was in my final year at the University of Victoria, in Victoria, Canada. Reid had only been granted full parole one year earlier. He was the poster boy for redemption, having spent years on the FBI’s Most Wanted List. He had served 20 years in 20 prisons for being involved in over 100 bank robberies and three prison escapes. In 1986, his semi-autobiographical novel, Jackrabbit Parole, written and published while he was still in prison, became a Canadian bestseller. The woman who helped him edit his manuscript was poet and writer Susan Musgrave. They married the year the novel was published.

By the late 1980s, Reid looked like he had it all. He was a free man surrounded by loving family and friends. His life was filled with writing and teaching, and he was a well-known advocate for literacy and prison reform. He turned up for our interview dressed all in black, like Johnny Cash and just as magnetic. The next hour was filled with animated and often intense conversation. Each question resulted in a riveting story about prisons, writing, and his time as a member of the Stopwatch Gang, three Canadian men famous for their under-90-second bank robberies. (This robbery style inspired scenes in director Kathryn Bigelow’s film, Point Blank.) Reid was occasionally impatient with the questions. He was not a man who suffered fools — or questions he’d been asked many times before — gladly. He had opinions about the police, drug laws, and the inhumane state of most prisons. His explanation that the only people who made it to death row were poor, black, or native was so impassioned, and laden with statistics, that I changed my opinion about the death penalty that day.

Flashforward to 1999. After 13 years of a “publicly redeemed life,” his addiction dragon returned to haunt him. He explains how it happened in The Last Score, the opening story in A Crowbar in the Buddhist Garden. An unexpected meeting with an old prison buddy flips his life upside down with one knock on a nearby apartment door: “two haircuts and a shave, and we entered a small airless junkie apartment smelling of toadstools and cat urine … It seemed the perfect place to unmake my life, just for this afternoon. Just for today.” Soon desperate to pay off a $90,000 debt, he staged an unsuccessful bank robbery in Victoria’s Cook Street Village neighbourhood, which led to a quick arrest and a new 18-year sentence.

Like Jackrabbit Parole, these essays were also written in prison. It is not always an easy book to read. Reid is a sensory writer, using vivid language to portray a variety of experiences: the horror of the nurse who looked down at his skinny, 14 year-old, addict-marked arms; the smell of urine in solitary; the screaming and howling of the angry and crazy in the next cell. In Without My Daughter, he expresses grateful awareness of his young daughter’s love, describing her as an “enduring victim” whose “love is relentless: it jumps over the razor wire.”

The 19 narrative, non-fiction essays in this collection ensure no one closes the book with any romantic notions about addiction or life in the re-named Correctional System. That these two worlds are unfamiliar to many became obvious to Reid when he won a poetry contest. He received a cheque in prison for $60, along with a note from the editor: “As a fellow writer I envy you the peace and solitude to pursue your chosen craft.” Although one can imagine Reid’s colourful response in that moment, in Born to Loose he writes: “Give me a break! Writing in prison is like trying to juggle chainsaws during Chinese rush hour.”

Released on day parole in 2008, Reid spent time in a half-way house. But nothing is ever simple in Reid’s life. His day parole was revoked two years later after he was caught in an uninsured vehicle filled with 18 bags of contraband American cigarettes. He remains in the area William Head Institution  today.

Alan DiFiore, co-executive producer and writer of the television series Grimm, adapted Reid’s first book, Jackrabbit Parole, into a script years ago, but the film was never made. There may now be renewed interest in this project because of Reid’s recent book award.

A Crowbar in the Buddhist Garden is an astonishing piece of work. That Reid’s prison memoir won the $5,000 City of Victoria’s Butler Book Prize in October, 2013,  has had a polarizing effect on readers and critics. Not everyone is happy that a convicted criminal has been given both an award and money for writing his version of his life and crimes. On one side are enthusiastic readers. On the other are people who have not forgotten Reid’s dramatic Beacon Hill Park shooting and car chase resulting from his botched 1999 bank robbery. The Victoria Times Colonist brought the issue into the open in an editorial headlined “Judge Writing, Not the Writer.” Said the newspaper: “These are not awards for personal development, community service or celebrity; they are for writing that transcends the ordinary. Reid’s crimes are contemptible and he must pay for them in prison, but censorship has no place in the Victoria Book Prizes.”

It’s hard to think of these tales as “essays.” This word is too academic for stories that draw the reader into Reid’s reality, a world of child sexual abuse, addicts, and criminals. His stories fluctuate between funny and jaw-dropping and although not all of the characters are sympathetic, they are complex and engaging personalities. In Born to Loose, Reid provides a love poem for Meat, an inmate who wants his girlfriend to visit: “Dear Mona, Roses are dead, Violets are doomed, As will be you, If you don’t visit soon.” Apparently Meat was happy with the result, “but wanted to add ‘and bring lots of drugs.’”

This beautifully-written book is filled with poignant and shocking stories, and yes, even occasional celebrations, all written without a whine in sight.