Battling the Brit Invasion: the fight for American pop independence 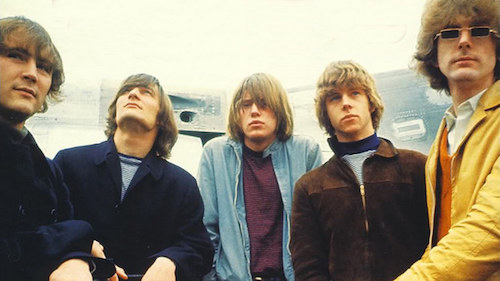 The Byrds in 1965. Sony Music Entertainment

Fifty years ago, in the first half of 1965, the British invasion was officially under way – at least, in music.

It seemed like all the biggest hits on the American pop charts came from British bands. Ever since The Beatles’ pivotal first appearance on the Ed Sullivan show in February 1964, the American shores had been flooded by a steady stream of English bands with matching suits, moptop haircuts, endearing accents and catchy tunes.

The UK acts didn’t completely eclipse the Americans during the height of the moptop mania. The Supremes, for instance, had hit the top of the US charts with five consecutive singles by the summer of 1965, and the Righteous Brothers’ You’ve Lost That Lovin’ Feelin’ topped the charts in early 1965.

The British success was significant enough, however, to force the American music business to recalibrate. By the summer of 1965, an American pop music revolution was underway.

This rebuttal to the British invasion was headlined by The Byrds’ hit single, Mr Tambourine Man. Recorded in Hollywood in January 1965, the story of this song, its influences and its wild success, is the story of America’s return salvo in a transatlantic fight for pop domination.

Mr Tambourine Man came to the Byrds via their manager, Jim Dickson, who was also active in music publishing.

In 1964, Bob Dylan was mostly known as a songwriter, and Dickson was able to obtain an unreleased recording of Dylan performing his song. Recorded during a June 1964 session for the album Another Side of Bob Dylan, Dylan was dissatisfied with this version and it was nixed (another version would appear on his next album). Dylan also performed Mr Tambourine Man at the Newport Folk Festival that summer.

Dickson was a believer in Dylan’s music, and was convinced that this was just the song his fledgling group needed.

The Byrds (then going by the name Jet Set) began working on Mr Tambourine Man in the fall of 1964, though the band was a bit more skeptical of the song. The first arrangement featured harmony vocals, percussion and acoustic guitars, very much in a folk style.

Missing was the band’s trademark jingle-jangle of the Rickenbacker electric 12-string guitar, which would not become a part of their sonic signature until members Roger McGuinn, David Crosby, Gene Clark and probably Chris Hillman watched A Hard Day’s Night, in which George Harrison plays the Ric 12 string throughout the film. (McGuinn claims to have been so inspired by the sound that he immediately traded a couple of instruments to get his own Rickenbacker.)

The trademark opening guitar lick of Mr Tambourine Man was crafted by Roger McGuinn, who had significant experience as an arranger; in the past, he’d worked for artists such as the Limelighters, the Chad Mitchell Trio and Bobby Darin, while arranging for Judy Collins.

McGuinn had been playing an adaptation of J S Bach’s Jesu, Joy of Man’s Desiring on the acoustic 12-string during live shows. He based the distinctive opening lick for Mr Tambourine Man on his Bach arrangement. When he played that lick on the electric 12-string, the classic jingle jangle of folk rock was born. (Bach’s Jesu melody makes another appearance in She Don’t Care About Time from the band’s second album.)

The Byrds were signed to Columbia Records in November 1964, in part on the recommendation of jazz musician Miles Davis. The label, however, didn’t believe in the young musicians’ ability to deliver a suitably professional recording in the required studio time.

So the producers turned to the best studio musicians in Los Angeles, a group of skilled players popularly known as the Wrecking Crew. (At the time, it was common practice for groups to use studio musicians on their recordings.) In fact, McGuinn is the only member of The Byrds to play on Mr Tambourine Man, though he, Crosby and Clark perform all the vocals.’

The members of the Wrecking Crew had played on many of the girl-group hits that came out of Los Angeles in the 1960s. These musicians also played on Beach Boys sessions and, according to Roger McGuinn, some of the players on the Mr Tambourine Man session had played on the Beach Boys’ Don’t Worry Baby.

Whether or not this is accurate (the union contracts suggest Wrecking Crew member Bill Pitman played on both sessions), it’s at least apparent that the studio players at the Byrds session were asked to re-create the groove of that Beach Boys single.

They succeeded: if you listen to the two records back to back, the similarity in feel is unmistakable, especially in the respective rhythm guitar parts.

Mr Tambourine Man marked the beginning of the American folk-rock response to the British invasion. Columbia delayed the single’s release to avoid competition with the label’s other records, so Mr Tambourine Man appeared in the spring of 1965, entering the Billboard Top 40 on June 5.

By the end of the month it was in the number one slot, where it remained over the Fourth of July weekend. The Byrds’ single displaced The Four Tops’ I Can’t Help Myself at the top of the charts, so its success was not a direct victory over the British groups. The Byrds’ platter, however, was then ousted from the top slot by the Rolling Stones’ (I Can’t Get No) Satisfaction, as the competition for chart supremacy with the Brits began heating up.

To recap: the Byrds set a Dylan song to a Beach Boys beat using a Beatles guitar to play a Bach-influenced lick, while recording with a studio band that was accustomed to playing girl-group hits (phew!).

The resulting music – a stylistic melting pot – launched a spirited defense of the American charts that would soon be joined by Dylan himself, along with Sonny and Cher, the Loving Spoonful, the Turtles, The Mamas and the Papas, Simon and Garfunkel and Barry McGuire.

Folk rock wasn’t the only American style that topped the charts in the mid 1960s: Motown continued its successful run, and southern soul – highlighted by Otis Redding and Wilson Pickett – joined the fray.

Meanwhile, the Beach Boys’ surf music became increasingly ambitious and influential, and Paul Revere and the Raiders led a harder-edged musical assault on the British invasion, scoring a series of hit singles while appearing on ABC’s weekday TV program Where the Action Is wearing Revolutionary War outfits, tricorner hats and all.

But when the Fourth of July fireworks erupted in the summer of 1965, the meteoric musical ascent of Mr Tambourine Man was the first clear sign that American groups were back in the game – and on the charts – for good.

John Covach is Director, Institute for Popular Music at University of Rochester. This article was originally published on The Conversation. Read the original article.