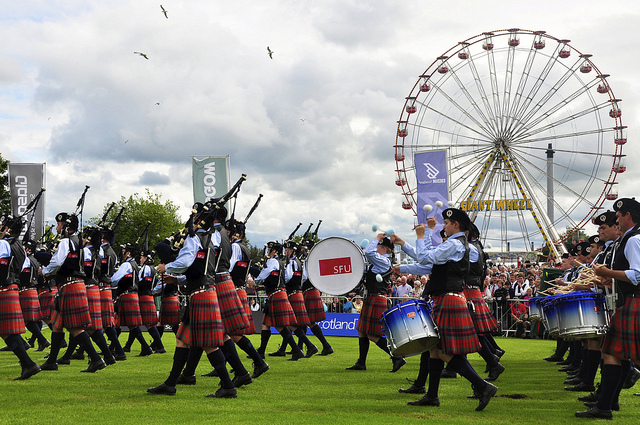 The Great Highland bagpipe is as central to Scottish identity as tartan and Robert Burns. Walk down Edinburgh’s Royal Mile and you’ll hear that familiar wail, while pipers gather each year to empty their lungs at everything from local competitions to the famous Edinburgh Military Tattoo. The pipes were not invented in Scotland, though. In fact, they are part of a much older tradition that some may find unpalatable: the English were playing the pipes hundreds of years before the Scots got their hands on them.

Bagpipes are actually a family of instruments, and most countries from India to Scotland and from Sweden to Libya boast at least one indigenous variety. They date back over 3,000 years, but appear to have been developed from the hornpipe, which goes back even further. Through the millennia, bagpipes have appeared in an incredible number of varieties – big like a zampogna gigante; small like a musette; droneless, or with two or more drones (or reeds); and with either one or two chanters (or pipes).

The drones can be vertical or horizontal, compressed into a little barrel or dangling on the piper’s back, and the bag can be inflated by a mouthpiece or by bellows. The bag can be covered in brocade or tartan, left as a tanned skin, or even made of Gore-Tex. Each has its own scale, tone and sound, all of which tells a tale about their home country.

Early documents about bagpipes are scarce. Though literature featuring bagpipes in Ancient Greece is dubious, sources confirm that the instrument was known to the Romans. The ancient historian Dio Chrysostom described Emperor Nero as being able to play the pipe both with his mouth and by squeezing a bag under his armpit. According to the most widely accepted opinion, the Romans brought the instrument into Britain after their invasion in AD 43.

It is not until the Middle Ages that the bagpipe tradition took off in a significant way, however. By that time there are copious references all across Europe. A remarkable episode in British bagpipe literature is the Exeter Riddles, a manuscript containing Anglo-Saxon riddles possibly collected by bishop Leofric (1016-1072). Riddle 31 tells of a beautiful, noble bird resting on a man’s shoulder, with its beak facing downwards and its feet in the air. The answer to the name of the bird is the bagpipe, since its beak is the chanter and its feet are the drones.

The first unquestionable appearance of the bagpipe in Scotland is not until the 15th century, in carvings in Rosslyn Chapel and Melrose Abbey, respectively of an angel-piper and a pig-piper. It is reasonable to think that the tradition was absorbed into Scotland from the south, before developing its own characteristics. By the 16th century it was Scotland’s military instrument, and a carrier of public events.

Much 18th-century Scottish material about the bagpipe is linked to Jacobitism, the movement that sought the return of the Catholic Stewart kings to the British throne following the removal of James II in the Glorious Revolution of 1688. The Jacobites saw the bagpipes as an icon of Scottish national belonging and military pride, while their Hanoverian opponents used the instrument in propaganda to caricature the Jacobites.

This politicisation of the bagpipes led to a common belief that they were banned in Scotland. Partly the source of the confusion is the Disarming Act of 1746, to which a passage added two years later ordered “restraining the Use of the Highland Dress”. It included tartan and plaid, but never the bagpipes. The misconception was probably strengthened by episodes such as the hanging of piper James Reid of Dundee. He was captured in 1745 in Carlisle and sentenced to hanging for treason, having taken part in Jacobite rebellions. He may have been a piper, but his hanging had nothing to do with disobeying the Disarming Act.

The bagpipes have been banned – but in Poland during World War II. Original research from the Ethnographic Museum of Warsaw in collaboration with Poznan’s Museum of Musical Instruments shows footage documenting how Germans ordered Poles not to play their version of the pipes, perhaps threatened by the instrument’s ability to stir nationalist spirits. Such is the information that comes out of bagpipe studies, which has been undergoing a revival of late – and is indeed the subject of a paper at a conference in Glasgow on February 26-28. So while the Scots may have made the instrument their own over the centuries, they share the piping tradition with the hands of many nationalities – including the English. Widdye credit it?

Vivien Williams is a Research Assistant (Musicology), University of Glasgow. This article was originally published on The Conversation. Read the original article.