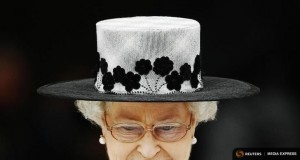 Britain’s Queen Elizabeth leaves after attending a service of commemoration to mark the end of combat operations in Iraq, at St Paul’s Cathedral in London October 9, 2009. Queen Elizabeth joined families and politicians on Friday for a service to honour British service personnel who fought and died during the war in Iraq. REUTERS/Luke MacGregor (BRITAIN POLITICS CONFLICT ROYALS MILITARY RELIGION SOCIETY)