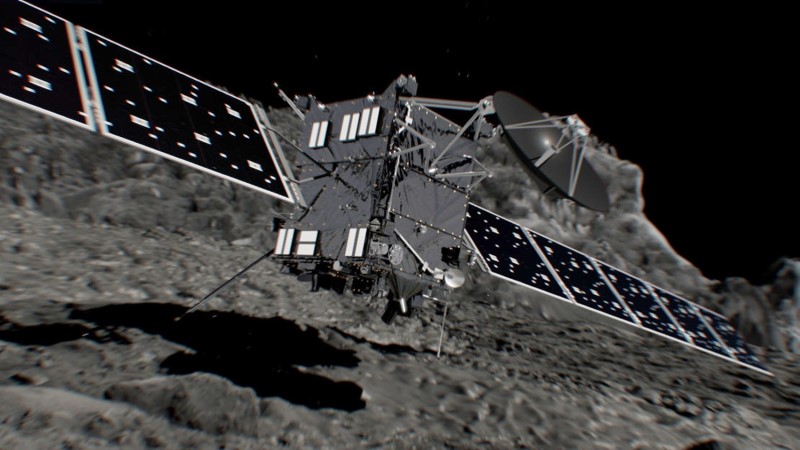 BERLIN (Reuters) – The Rosetta spacecraft ended its historic mission on Friday, crashing on the surface of the dusty, icy comet it has spent 12 years chasing in a hunt that has provided insight into the early days of the solar system and captured the public’s imagination.

The spacecraft has stalked comet 67P/Churyumov–Gerasimenko across more than 6 billion km (3.7 billion miles) of space, collecting a treasure trove of information on comets that will keep scientists busy for the next decade.

Scientists in the European Space Agency control centre in Darmstadt, Germany, clapped and hugged as confirmation of the end of the mission came at 1119 GMT.

Rosetta completed its free-fall descent at the speed of a sedate walk, joining the probe Philae, which landed on the comet in November 2014 in what was considered a remarkable feat of precision space travel.

He was among some 300 people who had also gathered before dawn at a conference room at the International Astronautical Congress in Guadalajara, Mexico, to watch a live webcast as Rosetta’s signal disappeared from monitors, simultaneously with the team in Germany.

“It was a good ending,” Klaus Schiling, who worked on mission planning for Rosetta 27 years ago with prime contractor Airbus <AIR.PA>, told Reuters at the Mexico space conference. “There were so many ups and downs with this mission.” 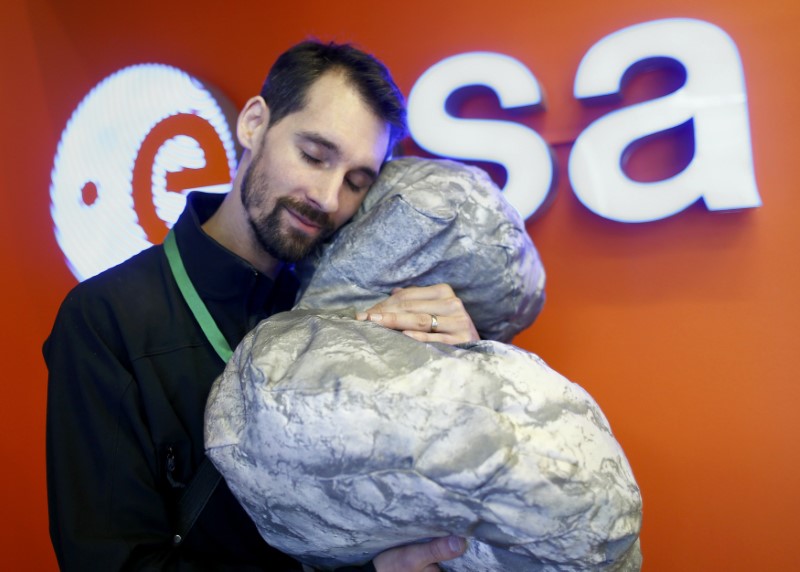 The mission managed several historic firsts, such as getting a spacecraft into orbit around a comet and the unprecedented landing of a probe on the surface. A handful of previous spacecraft had snapped pictures and collected data as they flew past their targets.

But, dashing hopes for more discoveries, Philae, the 100 kg (220 lb) probe, bounced several times on landing before getting stuck against a cliff wall, leaving it unable to perform any more experiments beyond its first three days on the comet after its solar-powered batteries ran out.

The ESA is ending the mission because 67P is racing toward the outer solar system, out of range for the solar-powered spacecraft.

Rosetta also has been subjected to the harsh radiation and extreme temperatures of space since launching in March 2004 and so was unlikely to last too much longer.

Before reaching the surface and shutting down, Rosetta’s instruments and camera relayed back data and images, giving scientists insight into the structure of the comet.

That data will reveal information on the side walls of the comet, crucial to understanding how they are formed, plus on large 100-metre (300 foot) wide pits, which scientists believe are key to how the comet releases gas and dust as it is warmed by the sun.

Daniel Brown, an astronomy expert at Nottingham Trent University, said the images sent back from the Rosetta mission were “as powerful as Neil Armstrong’s first steps on the Moon”.

Data collected by Rosetta and Philae is already helping scientists better understand how the Earth and other planets formed.

For example, scientists now believe that asteroids, not comets were primarily responsible for delivering water to Earth and other planets in the inner solar system, possibly setting the stage for life.

“We’ve just scratched the surface of the science. We’re ending the mission, but the science will continue for many years,” project scientist Matt Taylor said ahead of the end of mission.