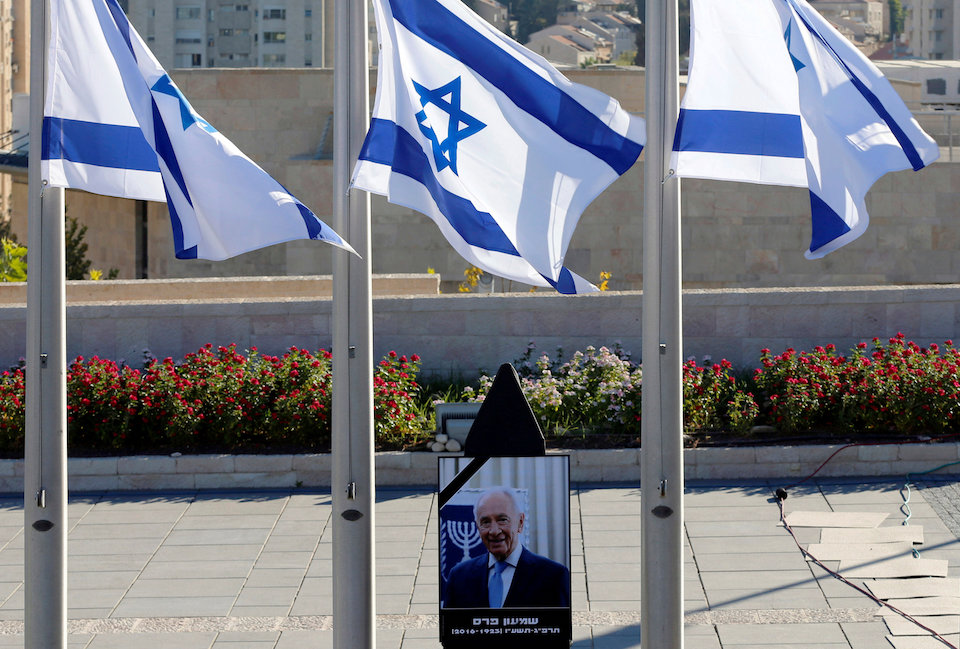 A portrait of former Israeli President Shimon Peres is seen near Israeli flags lowered to half mast at the Knesset plaza, the Israeli parliament, ahead of his funeral, in Jerusalem September 30, 2016. REUTERS/Ammar Awad

Shimon Peres, often described as “the last of Israel’s founding fathers”, has died at 93 after a major stroke. Peres was a pillar of the Israeli political scene from the state’s founding in 1948 until his death on Sept. 28, and his passing has been marked with tributes from around the world.

But while he was generally popular in Israel and abroad, his record in office was by no means unblemished – and given what a towering figure he is in Israel’s history, his reputation as one of the 20th century’s great peacemakers needs to be put in perspective.

This pragmatism helps to explain his extraordinary staying power at the top of the Israeli establishment. And given his consistent presence at the centre of power, whether as president, prime minister or leader of the Israeli Labour party, it is not surprising that his legacy is a mixed one.

As his remark to the BBC makes clear, Peres was first and foremost an Israeli nationalist, a committed Zionist prepared to do whatever it took to protect the state of Israel from its perceived enemies.

This means that any attempted peace process he engaged in was bound to be beset by various constraints. Above all, he was limited by the fundamental problem of his country’s history: an inherent tension between the imperative to keep Israel safe and the evident need to form peaceful relations with neighbouring Arab states and the Palestinians.

It was never going to be easy for Israel to address the Palestinian question. In 1948, in order to make way for the new state of Israel, as many as 800,000 Palestinians were forced to flee from their homes. Many of these people and their descendants continue to live in highly insecure conditions in refugee camps spread across Jordan, Lebanon, and until recently Syria.

Palestinians and their supporters argue that this injustice must be resolved before genuine peace can be realised – but they also wonder how serious Israel really is about the peace project.

Much of this distrust dates back to the war of 1967. Nervous about Arab armies massing on its borders, Israel launched a brief but highly effective offensive and occupied Syrian, Egyptian and Palestinian territory. With the exception of the Sinai, which Egypt took back in the late 1970s when it struck a peace treaty with Israel, these areas remain under Israeli control.

Within days of its victory in 1967, the Israeli government embarked on a programme of settlement building in the (Syrian) Golan Heights and the (Palestinian) West Bank. Although defined as illegal under international law, this policy continues in various forms to this day – and Peres supported it enthusiastically.

The Oslo Accords of 1993 were meant to address the seemingly unending occupation, and for a while, some Palestinians thought there was at last a chance to make peace. Although Oslo had its critics, both parties appeared to be trying to make it work. It felt like a breakthrough, and Peres was lauded for his part in it.

After Peres’s fellow Nobel laureate Yitzhak Rabin was assassinated in 1995, Peres succeeded him as prime minister. His reign was soon marred by violence. The Palestinian Islamist group Hamas began a campaign of suicide bombings against Israeli targets, many of them civilian; in response, Peres launched an ill-thought-out attack against neighbouring Lebanon, which culminated in the horrific Qana massacre.

One of the reasons Peres remained an acceptable face for even Israel’s most controversial and aggressive behaviour was his masterly ability to defend government actions in public, and to explain seemingly unreasonable positions with articulate ease.

An intelligent man given to diplomatic nuance and tact, Peres was a very different individual to the current premier, Benjamin Netanyahu, who relies on harsh rhetoric and military action to assert Israeli power. Peres’s leadership seems like a golden age by comparison, as many members of today’s Israeli cabinet quite openly say that there will never be a Palestinian state.

Peres’s ultimate asset was his pragmatism, and he accepted that there needed to be some sort of peace – but even for him, it could only be on Israeli terms. Perhaps that’s one reason why even Oslo, for all the hope and goodwill invested in it, was doomed to fail in the end.

Maria Holt is a Reader in Politics at the University of Westminster. This article was originally published on The Conversation. Read the original article.