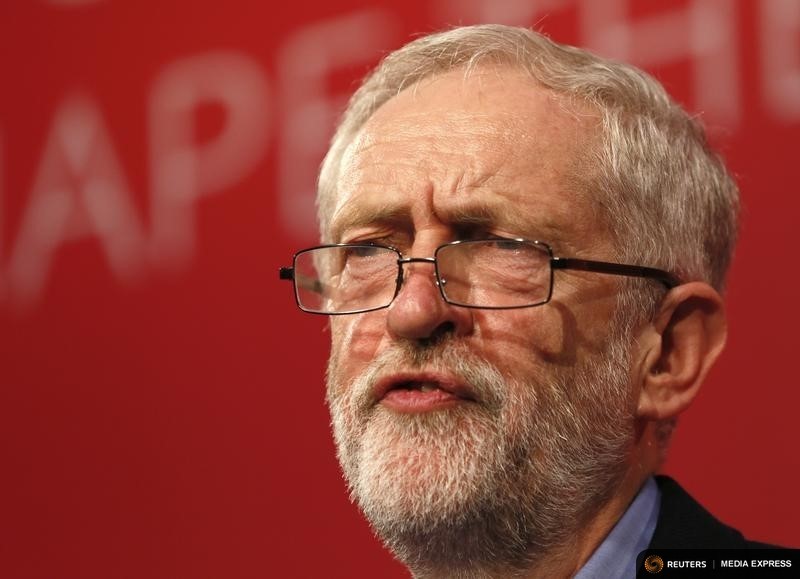 LONDON (Reuters) – Jeremy Corbyn, a veteran left-winger who professes an admiration for Karl Marx, was elected leader of Britain’s opposition Labour party on Saturday, a victory that may make a British EU exit more likely and which one former Labour prime minister has said could leave their party unelectable.

Greeted by cheers from supporters in the room and hailed by radicals across Europe, Corbyn’s triumph opened up the prospect of deep splits within Labour with some fearing he will repel voters with radical policies that include unilateral nuclear disarmament, nationalisation and wealth taxes.

“Things can and they will change,” Corbyn, who when he entered the contest was a rank outsider, said in his acceptance speech after taking 59.5 percent of votes cast, winning by a far bigger margin than anyone had envisaged.

“I say thank you in advance to us all working together to achieve great victories, not just electorally for Labour, but emotionally for the whole of our society to show we don’t have to be unequal, it doesn’t have to be unfair, poverty isn’t inevitable,” the grey-haired, bearded 66-year-old said.

His victory reflects growing support for left-wing movements across Europe, with Syriza winning an election in Greece in January and Spain’s anti-austerity party Podemos performing well in opinion polls. Both parties welcomed the news.

“The election of Corbyn to the Labour leadership … is a significant boost to the pan-European front against austerity and sends a message of hope to European peoples,” Syriza said in a statement.

Corbyn’s rise also has an echo of the way Senator Bernie Sanders has galvanized left-leaning Democrats in his bid to beat Hillary Clinton to the party’s nomination for the U.S. presidential race.

However, the scale of division Corbyn’s victory has created in his own party was immediately laid bare with one Labour lawmaker quitting his role as a health spokesman while Corbyn was making his acceptance speech.

Others quickly followed, saying they would not serve in his senior team.

“My job is going to be a complicated one, that I fully understand,” Corbyn told hundreds of supporters singing the socialist anthem “The Red Flag”, Labour’s traditional song since 1925, at a celebration in the tiny Sanctuary House pub near parliament.

If you enjoy this story please support Facts and Opinions by buying a $1 day pass or  subscription, or making a donation toward our independent, non-partisan, employee-owned collaboration.  F&O is funded by you, our readers. We do not carry advertising or fake “branded content” stories. Please tell others about us.

A vegetarian republican who only received backing from fellow Labour MPs to enter the contest to ensure wide debate, Corbyn has struck a chord with many Labour supporters by repudiating the pro-business consensus of Tony Blair, who won three elections for Labour but is now widely unpopular, not least because of his involvement in the invasion of Iraq.

Corbyn has offered wealth taxes and ambiguity about EU membership. He is a strong opponent of military strikes in Syria, meaning it would be harder for Prime Minister David Cameron to win parliamentary support to bomb Islamic State targets there he considers a threat to British security.

“In moments of clamour, in moments of fervour, decisions are made – go here, invade here, bomb here, do this, do that,” Corbyn told a rally in support of Syrian refugees held hours after his victory.

“There’s lots of military advice, there’s lots of apparently simple and easy solutions. Tragically wars don’t end when the last bullet is fired or the last bomb is dropped.”

Corbyn also voted ‘No’ to Europe in a 1975 plebiscite and his success could make Britain’s exit from the European Union more likely when Cameron holds an in/out referendum by 2017.

A parliamentary veteran of more than 30 years with a long history of voting against his own party, Corbyn triumphed on a message of increasing government investment through money-printing and renationalising vast swathes of the economy.

During the campaign Corbyn has been repeatedly asked about whether he supported the views of Marx, co-author of “The Communist Manifesto”. “He (Marx) was essentially a fascinating figure who observed a great deal and from whom we can learn a great deal,” Corbyn said in a TV interview in July.

Expressions of admiration for Marx have been largely taboo in the top echelons of Labour since a battle in the 1970s and 1980s to expunge the influence of Marxist militants in the party. Even the word “socialism”, that trips easily from Corbyn’s lips, has been handled somewhat gingerly. 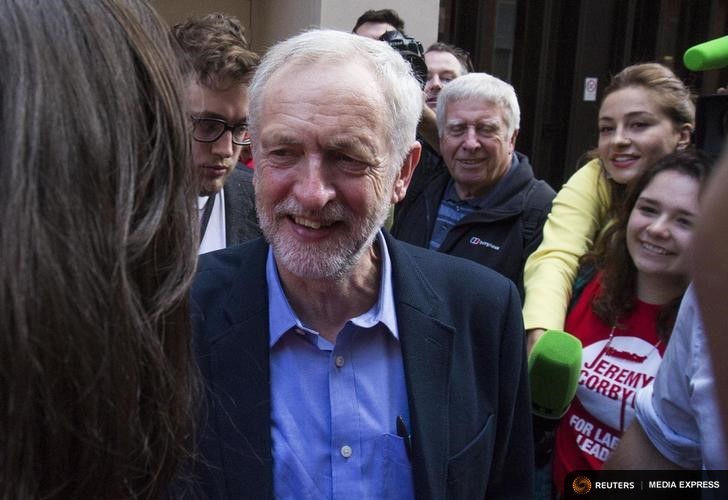 The prospect of a return to the party’s socialist origins in commitment to partnership with trade unions and state ownership has drawn stark predictions it could be annihilated in 2020 national elections by a British public that in May re-elected Cameron for a second term on a promise to cut welfare spending.

“The party is walking eyes shut, arms outstretched over the cliff’s edge to the jagged rocks below,” said former centrist Labour prime minister Blair in a plea to voters to stop the Corbyn surge before the result was announced.

Some party members have even said Labour could split or that Corbyn would face a revolt by some of his MPs.

Neil Coyle, one of those who nominated Corbyn but actually supported his rival Cooper, queried his leadership potential.

“How is it that he’s been in parliament since 1983, and yet he can’t find 35 MPs to put him on the ballot paper who genuinely think he’ll do a good job?” Coyle told Reuters.

“He has a big job to do to seek to unite the party and I believe he does intend to do that,” Miliband told reporters.

Labour suffered a particularly crushing defeat in Scotland where it lost all but one of its 41 seats to the anti-austerity Scottish National Party, which has also tapped into political disillusionment with Britain’s established political class.

“The scale of the challenge to win in 2020 is huge, we’ve got to win back Scotland, in the English shires,” said David Lammy, a Labour lawmaker.

“I’m not entirely won over that the ‘left’ message is sufficient to win government in this country.”

By promising to increase, rather than cut, government investment though money-printing, Corbyn found favour among disillusioned young voters and socialists who had drifted away from the party after nearly two decades battling for the political centre ground.

The likely abandonment of the political centre ground, particularly on the subject of balancing Britain’s books, is seen by many as a gift for the Conservative Party that could herald a prolonged spell in power for the centre-right party.