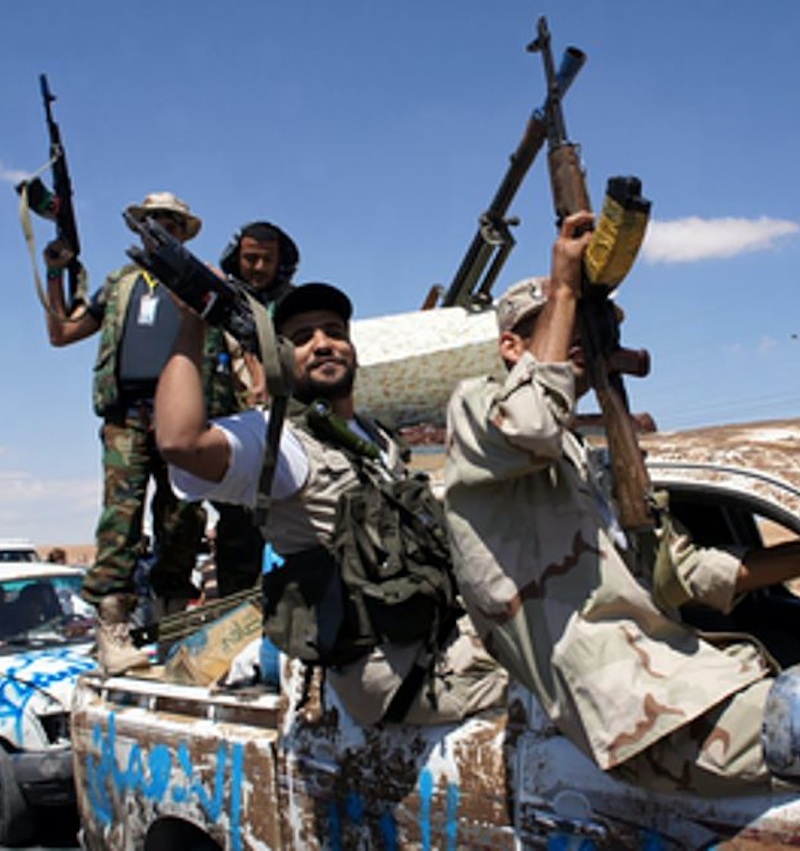 The time September, 2011 and the place Libya’s Bani Walid, a Gadhafi stronghold, rebels, bonded or not, are all smiles. ELIZABETH ARROTT/VOICE OF AMERICA/ WIKIMEDIA COMMONS

It’s often said that blood is thicker than water – that family ties trump all others. But research with groups of men fighting in Libya has suggested that the bonds they formed in times of great adversity were as strong as those they had with their own kin.

During the 2011 conflict in Libya, we surveyed the civilians who had taken up arms to topple the Gaddafi-led regime and found extremely strong relationships: these men had bonded to one another as strongly as if they were brothers.

Those on the front line had the strongest bonds of all. Their ties were so profound that, in many cases, they were willing to die for one another. Such behaviour, where individuals show a willingness to offer the ultimate self-sacrifice and lay down their lives for people with whom they share no genes, has puzzled evolutionary scientists since the days of Darwin.

Our study, published in the early online version of the Proceedings of the National Academy of Sciences, is one of several pieces of research we have been conducting for the project: “Ritual, Community, and Conflict”. Anthropologists, psychologists, historians, archaeologists and evolutionary theorists are working together in this project to try to understand the forces that bind and drive human groups.

In July 2011, four months into the Libyan revolution, a member of our team in Oxford, Brian McQuinn, joined a humanitarian relief convoy travelling to Misrata, in the north-west of Libya.

While in Libya, he studied how the rebels began as groups of three to five fighters that later developed into the larger revolutionary groups. The members of each group prayed, slept and fought side by side.

I joined Brian in Libya as the conflict was ending. Together, we persuaded the revolutionary leadership in Misrata to allow us to survey 179 civilians from four different battalions registered with the Misrata Military Council.

Our survey included both revolutionaries who served on the front line with weapons and non-fighters, such as workers who serviced vehicles or drove ambulances.

When we asked the revolutionaries to choose which group they were most bonded with, family or battalion, front-line fighters were more likely than non-fighters to choose battalion. Our findings suggest that the strongest bonds evolve through sharing the experience of war, such as the deprivation and negative stress of combat. Although most fighters were not related, they characteristically expressed feelings of brotherhood for one another.

We measured levels of identity fusion – a visceral sense of oneness with the group that has been used in many previous studies.

Each individual was asked to represent their relationship to the group by choosing from a series of pictures that represented different degrees of overlap between themselves and three groups: their families, their battalions and other battalions. Those who chose the picture in which the “self” overlapped completely with the group were said to be “fused” with the group in question.

We found that 99% of front-line fighters had strong bonds or were “fused” with their own families – but perhaps more strikingly, 97% also indicated fusion with their own battalions, and 96% with fighters in other battalions.

When they were asked which of the groups they were most connected with, nearly half (45%) of front-line fighters chose their own battalion rather than their family. By contrast, only 28% of non-fighters chose battalion over family. Interestingly, hardly anyone surveyed (only 1%) were fused with ordinary Libyans who supported the revolution but did not join the battalions.

One interpretation of this study is that sharing life-shaping, intense experiences, such as bearing the brunt of enemy fire, is what bonded Libya’s revolutionaries so strongly; an alternative explanation might be that those who were predisposed to bond with the battalion at the outset are most likely to end up on the front line with each other.

The fact that fighters experienced such low levels of fusion with ordinary Libyans was quite surprising. In our discussions with fighters, they suggested that non-combatants were incapable of understanding what the fighters had experienced during the revolution. In the minds of the revolutionary fighters, this distinction may have sowed the seeds of distrust between fighters and non-combatants after the war.

There are already a number of studies that look at how cohesion in the military affects group performance, but very little research has looked at how intense bonds like these are formed – how bonding with the group can lead individuals to place themselves in harm’s way and sacrifice their lives for other group members.