In the perpetual debate about whether humans are good, greed scored another point.

Researchers in Europe and North America invented a game in which players had to cooperate to receive both individual cash and a reward for achieving a public-good (the example used was avoiding climate change). The longer players were willing to wait for their pay-off, the bigger the reward. Each player could defect at any time and claim at least some cash. 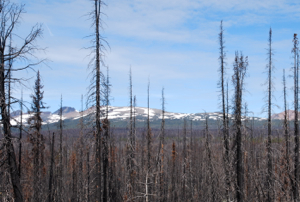 A forest hit by fire and pests on the Chilcotin Plateau in British Columbia, where studies suggest climate change is altering the ecosystem. Photo by Deborah Jones © 2012

Last December, in groups of six, 192 students were ushered into a room at Hamburg University, shielded from each other, and set up with computers. Each player was given 40 Euros to work with, and the chance to earn another 45 Euros depending on whether they cooperated to reach longer-term targets: rewards one day, seven weeks, or a generation later. The generational reward included the planting of trees and yielded “the greatest benefit to future generations,” said the report, published Oct. 20 in Nature Climate Change.

After playing 10 rounds – at the end of each round results were shared within a group – some groups managed the seven-day reward. But while many individual players opted for the generational reward, that one required cooperation – and not a single group met that goal.

The lesson? “Even groups gravitate towards instant gratification,” said Christopher Hauert, a math professor at the University of British Columbia, in a press release.

“It pays to defect but, if everyone rationalizes in this manner, the group forgoes the benefit of the valuable public good. In contrast, everyone would have gained had everyone contributed. This conflict of interest between the individual and the group is the signature of social dilemmas,” wrote the authors.

That people want instant self-gratification, and will more readily choose a smaller immediate reward instead of a larger reward in the distant future, is hardly news. Humans are mortals. At some level we’re each aware that today could be our last. Carpe diem, and all that.

But another report in the same edition of Nature might give us pause as we reach to seize our days. Deathly Heat, a study by Swedish researchers, showed that in the past three decades “the number of deaths resulting from extreme heat in Stockholm, Sweden, was double that which would be expected without climate change.”