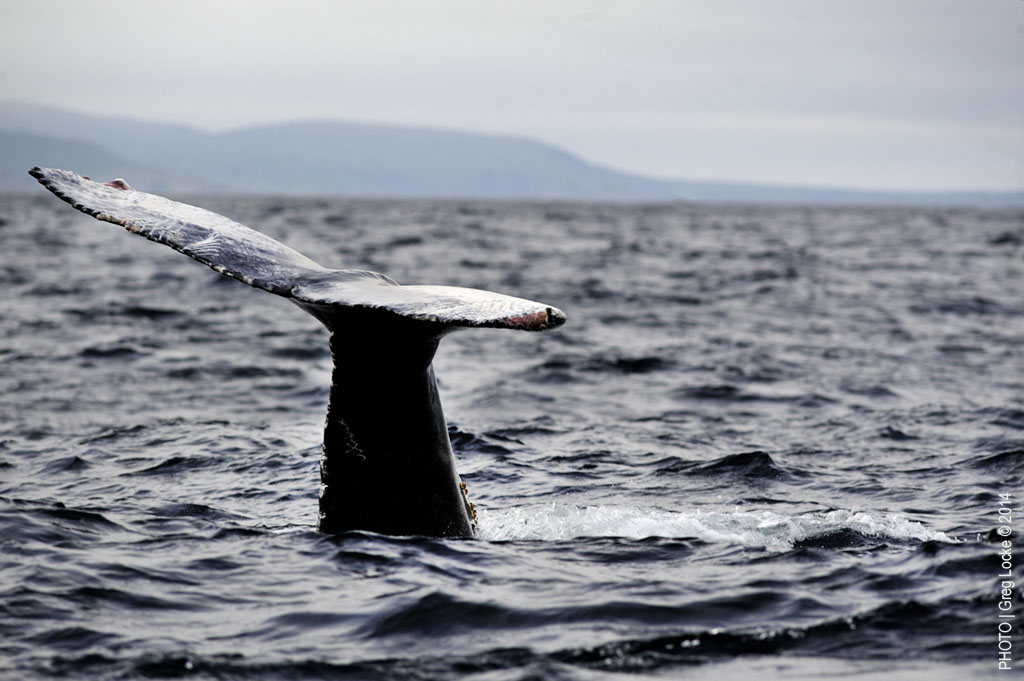 A humpback whale feeding off the coast of Newfoundland on Canada’s Atlantic coast. Photo by Greg Locke © 2014

By Richard Allan, University of Reading, The Conversation
August 21, 2014

There seem to have been a dozen or so explanations for why the Earth’s surface has warmed at a slower rate over the past 15 years compared to earlier decades. This is perhaps not so surprising given the complexity of the climate system – the world’s best detectives will inevitably struggle to disentangle the factors which influence every lump and bump in the surface temperature record.

However, recent research implicates natural changes in the Pacific and Atlantic oceans as the prime culprits. Just as the apparently random motions in a river’s flow can shift before our eyes from one minute to the next, the gradual sloshing about of our vast ocean waters can influence Earth’s climate from one year to the next and from one decade to the next.

It is clear that natural variability has and always will influence the climate. In addition to chaotic ocean fluctuations, changes in the brightness of the sun and variations in the frequency and intensity of volcanic eruptions (which cool the planet temporarily with sunlight-reflecting aerosol particles) influence the surface temperature. The recent Intergovernmental Panel on Climate Change working report found that these natural factors have contributed toward the slowing rate of surface warming since 1998.

However, recent measurements of ocean temperature made by thousands of automated buoys and observations of Earth’s radiative energy budget by satellite instruments indicate that heating has continued at a rate equivalent to every person worldwide using about 20 kettles each to continuously boil the oceans. This is consistent with what is expected from the rising atmospheric concentrations of greenhouse gases due to human activity. If anything, Earth’s heating rate increased between the 1985-1999 and 2000-2012 periods, despite a slowing in the rate of surface warming. 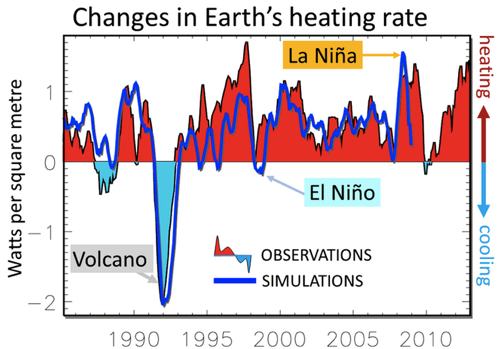 So, how is it possible for increased heating to not directly correspond with surface warming? The Earth’s heating is caused by an imbalance between the amount of absorbed sunlight and the heat emitted back to space. This surplus of heat is primarily absorbed by the oceans since they command the lion’s share of storage capacity compared with other parts of the climate system such as the land, the atmosphere or the cryosphere (ice and snow). This large heat capacity of water is noticable from the amount of time it takes to heat up your pan of vegetables. And there is a lot of water in the oceans; nearly a fifth of a cubic kilometre of water for each person on the planet.

Crucially, the temperature at the Earth’s surface depends upon where this heat is deposited in the oceans. If the upper levels warm, so too will the atmosphere above. However, if ocean circulations cause more heat to be drawn down to deeper depths (or less heat to be moved upward toward the sea surface) then surface temperatures will reflect this. Recent research has implicated our largest ocean, the Pacific, as the most likely mechanism for subducting heat to deeper levels.

Indeed, atmospheric and ocean conditions in the Pacific have been unusual in the past decade and computer simulations show that decades of slow surface warming despite rising greenhouse gas concentrations are associated with increased heating below 300m depth. The mechanisms for heat absorption are less clear; the simulations show that similar patterns appearing to originate from the Pacific are associated with the draw-down of heat in the North Atlantic and Southern Ocean as well as the Pacific.

New research published in Science now shifts the focus towards the Atlantic Ocean. Xianyao Chen and Ka-Kit Tung of the University of Washington show that heating from rising greenhouse gas concentrations has preferentially warmed the ocean’s 300-1500m layer since about 2000, thereby depriving the upper layers of this surplus heat and causing surface warming to slow.

The authors say these changes are part of a natural cycle of knock-on effects, involving ocean circulation responses to changes in how salty (and therefore dense) the upper Atlantic Ocean layers are. This cycle is thought to last around 30 years, contributing a sustained cooling effect then a warming influence on surface temperatures; when combined with steady heating from greenhouse gas increases this leads to a “staircase” effect of stable temperatures followed by rapid warming.

The changes in ocean circulation have also been shown to influence seasonal extremes and, based upon the proposed Atlantic mechanism, may persist for another decade before rapid warming is re-established. However, the nature of internal ocean fluctuations means it is difficult to pin down timings with any confidence.

While it is human nature to seek a single cause for notable events, in reality the complexity of the climate system means that it is unlikely there is one simple reason for any extreme weather event or a decade of unusual climatic conditions. Nevertheless, the recent hiatus in global surface warming has encouraged scientists to further scrutinise and learn in even finer detail than before the workings of our climate system.